BOSTON — As Internet dating sites for seniors become an increasingly hot topic among people approaching age 60 and older, the buzz is attracting attention in other circles, too. Academia, for one. Yet in a year when the oldest members of the huge baby-boom generation turn 65, the bulk of research on online dating is focused on experiences of younger adults, a pair of Ohio researchers say.

“There’s a scarcity of research on dating in later life,” say Wendy Watson and Charlie Stelle, assistant professors of gerontology at Bowling Green State University. They’re determined to change that with their current study of growing numbers of people age 60-plus who tap into match.com, a “traditional” site geared to adults of all ages, and SeniorPeopleMeet.com, a site designed for seniors. The professors shared their preliminary findings at the Gerontological Society of America‘s international conference, which wound up here last week.

Beyond physical attributes
But the professors’ research on people age 60-plus who use online-dating sites brought surprises. Rather than describing physical attributes, some older women portrayed themselves in new and thoughtful ways. One woman described herself as “a young spirit,” Watson said. Another wrote, “I don’t appear as old as I am.” Some older men, too, deviated from typical patterns. One man described his political beliefs. Another shared his passion for travel. 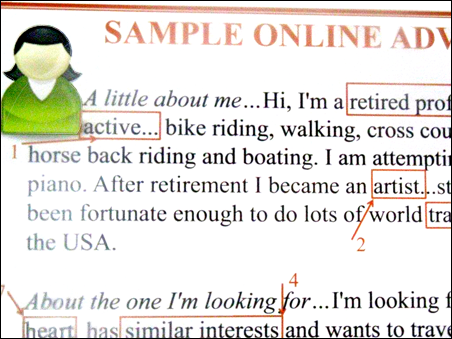 MinnPost Photo by Kay Harvey
Part of a sample online dating ad for seniors developed for a poster by researchers Wendy Watson and Charlie Stelle.

The researchers started with a coding system identifying three personal values (active lifestyle, culture and family) that younger people typically address on online-dating sites. A second category identified three personal characteristics (honest, fun-loving and kind) that site users would like in a date.

Companionship vs. marriage
In the personal-values category, many site users age 60-plus mentioned their values of companionship and compatibility in a potential mate. “Companion” and “compatible” were then added as values in the age-60-plus research coding.

For some people in their 60s, Watson says, companionship ranks as a higher priority than marriage. “Some seniors say, ‘Been there, done that.’ ” Some are looking instead for “somebody I really like, somebody who wants to do some fun activities.” The goal for some is purely finding “someone whose company they enjoy.”

The experience surpassed expectations for them both. They tied the marital knot.