I have got to get over this, I keep telling myself. Got to stop gritting my teeth every time I see a TV trailer for “John Carter,’’ the big Disney movie that opens March 9.

I’ve been trying for weeks, but every time I calm down, I catch another trailer and get mad all over again.

What I mind is having one of my favorite books turned into “The First Big Blockbuster of the Year!’’ – full of not-very-scary battles, one-dimensional bad guys and slobbering monsters that look like transformers with fur.

I’m not a sci fi fan, and I’m sure that various John Carter covens will disagree, but these trailers tell me that the movie’s missed the point.

And the title is just plain wrong.

It should have been called  “A Princess of Mars,’’ like the book it’s based on – the first in a  long series of Martian novels begun in 1912 by Edgar Rice Burroughs, the same man who wrote Tarzan.

“Princess’’ does include plenty of battles, but –  sorry, sci fi guys –  it’s actually a love story.

At my grandparents’ cabin

I was 11 or 12 when I ran across it, one summer, up at my grandparents’ cabin. I’d exhausted their entire collection of old Tarzan books when I discovered what I first thought was one I’d missed – a beat-up olive-green volume with a red spot on the cover.

It had no “Tarzan’’ in the title, but I opened it anyway. And was enthralled. Now, with the movie version looming, I wanted to see if it could enthrall me again.

My family’s copy had vanished in a cabin clean-up decades ago, along with a mess of WWII paperbacks and out-of-date college textbooks, but I tracked one down online and settled in to revisit the princess’s planet and my own past.

The novel held up remarkably well. Its century-old language was stately, its sentiments were noble, and its premise reminded me of Mark Twain’s “A Connecticut Yankee in King Arthur’s Court.’’ 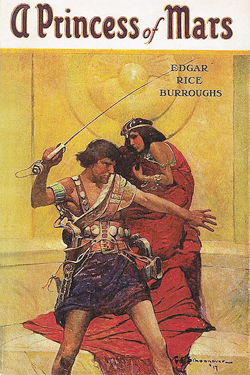 What surprised me, though, was something I hadn’t noticed when I was a kid –   hadn’t understood, more like: What a good tourist John Carter actually was.

Dropped without warning into a world where every single thing is alien, he does a nice job of modeling how to approach a new culture. He observes before he acts, he keeps his values intact and his judgments to himself till he understands the social rules, and he immediately starts learning the local language.

The reader learns right along with him: “Kaor” is Martian for hello; a “thoat”  is the mastodon-sized equivalent of a horse; Jed means king; a sorak is a little cat-like pet….

At first, this other-worldly adventure isn’t plausible to Carter himself, so he sticks to description, reporting in detail on what he sees and feels, including his own astonishments – at the double-mooned Martian sky; at elegant rifles with “wireless’’ scopes and a 200-mile range; at long-lived children who hatch from eggs, and multi-armed men and women to whom cruelty is merely entertainment.

The result reads like a turn-of-the-century travel memoir, so much so that I wondered whether John Carter’s attitude had influenced my own approach to travel, long before I was old enough to hit the road.

I remembered the bones of the story well enough – how Carter wishes himself to Mars, how he rescues and marries the princess, and how he winds up, 10 years later, trapped back on Earth.

I knew he was going to spend the rest of his life trying to wish himself back to his Martian family – like Heathcliff on that moor in Yorkshire, yearning for what he’s lost – at least till the next book in the series.

What I had forgotten was details, but now they flooded back as if I were paging through a family scrapbook.

I saw again the soft yellow moss that carpets the planet’s dried-up seas. I recognized Woola, the beast that follows Carter around like a loyal dog because he shows it the only kindness it has ever known. And that shriveled old man who runs the planet’s vital oxygen station – I’d know him anywhere.

Mars has to make its own atmosphere – Carter describes it as a dying planet with diminishing resources, in an eerie pre-echo of warnings we hear about Earth – and the process involves a color of light that our spectrum doesn’t have. I had tried to imagine that as a kid but could never picture anything more exotic than magenta. Still can’t.

The book moves fast, and reading it after so long was delicious. Maybe too delicious: I was sailing into Chapter Four before I recognized the enormity of what I had just taken for granted.

It wasn’t that I was reading it again, but how:

The new book doesn’t look like the one I found 50 years ago in a musty Minnesota cabin. This book is a shape-shifter, evanescent, insubstantial, a thing that wasn’t in any spectrum my child-self knew.

I had summoned it as you might summon a spirit, and it had obediently materialized on the sleek lighted screen I held in my hand.  Instantly. Out of thin air. At the touch of a finger. As if it were the simplest thing in the world.

Suddenly I saw my electronic book for what it is – real science fiction, science fiction come to life. I couldn’t have been more impressed if  I’d just waked up on the mossy plains of Mars.

Now about that movie…  I think I’ll go and see it, after all. It’s the proper thing to do, given that the book revived one other memory of John Carter. Right from the beginning, he had me at kaor.

‘John Carter’ is all wrong