Davy Jones’ death by massive heart attack Wednesday morning in Florida lit up the electronic wake that is Facebook Wednesday afternoon in Minnesota, as Monkees fans from Woodbury to Anoka came out of the closet to celebrate the fallen teen idol and wrap their heads around the fact that his death, as John Eller put it, “hammers another nail in the coffin of our childhood.”

“I can’t believe Davy Jones is dead,” sighed Eller, the veteran St. Paul-based singer/songwriter/superfan Wednesday evening, before teaching one of his music students a guitar lesson. “The Monkees were ground zero for me; I first heard them when I was 4. I’m so thankful I went to see them at the [Minnesota] Zoo last summer, because now that opportunity is gone forever.”

That July 2, 2011, date at the Minnesota Zoo was a thunderstorm-soaked affair performed during the state government shutdown and previewed by this terrific interview with Jones by KYMN (Northfield)’s Scott Peterson.  The show was shorter than normal because of the rain and concluded with singer/drummer Mickey Dolenz shouting, “Thank you San Francisco!” — to which guitarist Peter Tork, who attended Carleton College and fronted The Peter Tork Project at Duffy’s rock club in 1983, whispered something to Dolenz, who quickly corrected himself with, “Minneapolis!”

I got, like, 60 texts from people this morning, asking me if I knew or if I was OK, because they know how much I love the Monkees,” said Eller. “I know a lot of people disparage them, but those are great, great songs, and Davy Jones and Mickey Dolenz are two of the finest pop-rock vocalists ever. They were a match made in heaven – or Hollywood, as it was.”

The Monkees played Minnesota for the first time on Aug. 4, 1967, at the St. Paul Auditorium (or Municipal Stadium, as at least one report has it) at the height of their TV-flamed fame. “Race riots and curfews in Milwaukee and Detroit brought the Monkees to Minneapolis a day early,” wrote Jeanne Andersen, “so KDWB arranged for them to take over the airways on the afternoon before their concert at the St. Paul Auditorium. Mike Nesmith had fun making fun of all the ads, including sacred Dayton’s. Peter Tork played some groovy tunes and B-sides. Davy Jones was on for a nanosecond, and Mickey Dolenz was MIA. It is now 15 Monkee Minutes past the hour.”

R.E.M.’s Michael Stipe once famously said that he could never take seriously the Rock & Hall of Fame until it inducted the Monkees, who were heaped with plenty of critical accolades in the wake of Wednesday’s sad news.

“The Monkees mean more to me than the Beatles,” wrote writer/artist/musician Jon Hunt. “I’ve nearly come to blows defending them and I’ll defend them until the day I die. It saddens me more than I can say to finally lose one of ‘em.”

That was the tenor for much of Wednesday – along with some terrific memories from longtime fans.

“By the ’80s I had kind of forgotten about the Monkees, having moved on to classic rock and punk/hardcore. But then the reruns came back and I got hooked again,” said attorney/musician Louise Sherman. “Finally I got to see my childhood idols at the Carleton Celebrity Room in ’86 on a bill with The Grass Roots, Herman’s Hermits and Gary Puckett & The Union Gap. Sweet. I waited outside after the show to see if I could get an autograph, but the band were whisked away to some glamorous Bloomington rock star hotel, I’m sure.

“Fast-forward to 1996, and my cousin Laura told me she had met the soundman for the Monkees. They hit it off and started dating. My chance to meet the Monkees finally came! Through her connection I saw several shows on their mid-‘90s tours, including one at the Mankato Civic Center for my most memorable encounter with the band backstage. The best moment was sharing a Heineken with Davy and joining him in laughing at an extremely drunk chick who was making a fool of herself. He wasn’t being mean, he was just funny. He was being a Monkee! I was living the childhood fantasy, monkeeing around with Davy backstage at a sold-out show.” 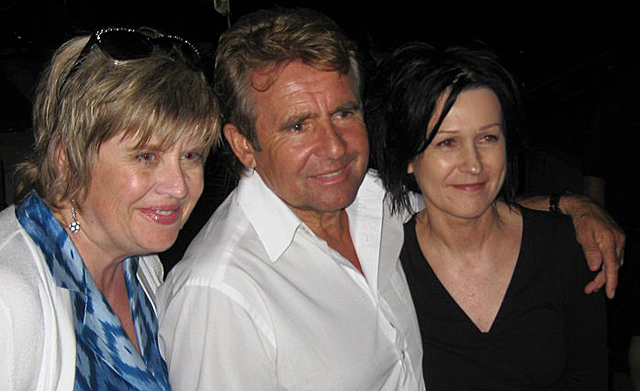 “As a kid,” said freelance makeup artist and photo stylist Kim Horecka, “my friends and I used to get together to watch their TV shows and play their records, and of course we all had our favorite Monkee. I and three of my friends were in an all-girl garage band in junior high in Mankato, and the first song we learned was the Monkees’ ‘(I’m Not Your) Steppin’ Stone.’

“I almost didn’t go to their show at the Zoo this last summer, partly because my entertainment fund was running on empty and partly because I didn’t want to see what had the potential to be a pathetic oldies kind of show. I ended up getting standing-room-only tickets at the last minute and I’m so glad I did. Everyone in the crowd was singing along and really enjoying the show, and the band seemed like they really enjoyed it, too.

“I had the opportunity to meet Peter and Davy after the show and I have to say they were both pleasant and, as corny as it might sound, I’m happy I got the chance to say ‘Hi’ and tell them of the special place they, and their music, have in my memories of growing up.”