For a poor kid who grew up on the wrong side of the tracks in St. Paul’s Frogtown neighborhood, my friend LeRoy Neiman lived an incredible life.

In fact, the famed contemporary artist’s life was every bit as amazing and extraordinary as that of another famous St. Paulite who was Neiman’s favorite writer, F. Scott Fitzgerald.

Neiman, who died last week at the age of 91 in a New York hospital not far from his studio overlooking Central Park, lived a life that even the Great Gatsby would envy.

During a half century as principal artist for Playboy magazine, Neiman painted — and often befriended and cavorted with — some of the most famous figures of the 20th century.

He roamed the world, always on the no-limits expense account of his friend and Playboy founder Hugh Hefner, opening studios in London and Paris and painting in vivid impressionistic colors the high life and low life he found at racetracks, boxing rings, ballparks, casinos, nightclubs and African safaris.

From the World Series and the Super Bowl to the Ascot races to the Olympics and the world chess championship, Neiman was as conspicuous as the people and scenes he painted, a Salvador Dali look-alike with his handlebar mustache and ever-present cigar.

I got to know Neiman in the 1980s because of my ties to St. Paul. I had been a Washington correspondent for the St. Paul newspapers and was running a consulting firm and literary agency at the time. I sent him a copy of Steve Thayer’s novel about Depression-era St. Paul, “Saint Mudd: A Novel of Gangsters and Saints,” which I helped get published, and he invited me to visit him in New York.

I did, and we hit it off, and I often visited him and his wife, Janet, at his studio and apartment on West 57th Street, just above the Café des Artistes, where we would have dinner. (Even though his prints bring in millions of dollars a year, he was quick to inform me that an artist never, ever pays for his drinks or meals.)

However, over the years, he sent me autographed copies of many of the 15 books of his paintings, including a magnificent 288-page coffee table book published in 2002, “LeRoy Neiman: Five Decades,” which he signed, “To my pal Al.”

In 1999, when then-Gov. Jesse Ventura spoke at the National Press Club, Neiman came as my guest and drew sketches of Ventura. He later painted a 4-by-5-foot impressionistic portrait of Ventura, which he offered to him for his official portrait in the state Capitol. But Ventura declined. I wonder what became of it.

Because of some success I’d had as a literary agent, Neiman asked me to help find a publisher for the autobiography he planned to write, and I arranged meetings with several top New York publishers, but never succeeded in finding one.

On Sept. 25, 2001, after writing to ask how his book was going, he sent me a postcard with a reproduction of his painting of the Brooklyn Bridge that showed the World Trade Towers looming in the background in fiery red and orange colors. “You mentioned the autobiography,” he wrote. “Well, I’m getting back to it. I better before my memory fails me completely or you give up on me.”

Unfortunately, I did give up on him, or he on me, after I returned to journalism in 1994 to help start The Hill newspaper, and he found a new agent. As a result, his autobiography, “All Told: My Art and Life Among Athletes, Playboys, Bunnies, and Provocateurs,” was published on June 8, just days before his death. 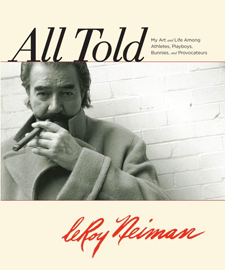 It’s a terrific book in which he tells the story of his hardscrabble days growing up in St. Paul as the son of a thrice-married mother, as well as the rest of his incredible life.

But one thing comes through loud and clear.

Neiman never made peace with his hometown – or with critics who refused to give him the respect he felt he deserved. Even though he was in the final stages of negotiating with the city of St. Paul to establish a downtown museum displaying much of his artwork, he was outraged when Pioneer Press columnist Katherine Lanpher wrote that his art “stinks,” and compared his work with “Precious Moments figurines and ceramic villages of Little Dickensian houses.”

Neiman promptly withdrew his offer to put $4.5 million in the project and denounced Lanpher’s column as a “savage, insulting attack on my character and work. I feel like I was mugged … in my old home town.” As a result, the museum was never built.

Neiman writes in his book that the museum idea was opposed by “a cabal of uptight citizens (who) couldn’t justify matching me up with their Saintly City. It was the Playboy artist stigma again, but I was over it. That was the last time I let St. Paul put me on a roasting spit.”

Ironically, Lanpher moved to New York in 2004, where she is a radio host and writing mentor. She told Mary Ann Grossmann of the Pioneer Press she is “still stunned at the reaction to that column. It makes me wonder if Neiman was looking for a way out of that museum. After all, he usually brushed off his critics.” But she added, “His paintings have their fans. But even those of us who didn’t like his work have to admire his masterpiece: his colorful, exuberant life.”

Neiman was no less forgiving of the art world’s establishment, which refused to consider him a major artist. Its attitude was summed up by a New York Times art critic on Saturday who described him as “the archetypal hack” whose popularity and enormous commercial appeal stemmed from “his ambitiously opportunistic personality and his position as Hugh Hefner’s court artist. … With his ever-present cigar and enormous mustache, he was a cliché of the bon vivant and a bad artist in every way.”

That’s a cruel judgment and, I think, a snobbishly wrong one that will change now that Neiman is gone from the scene. I predict that he will be remembered as a quintessential American artist who, while often outside the mainstream of the art world, was at the center of American life in the 20th century.

Someday, my friend LeRoy Neiman will be remembered as a quintessential American artist