The Suburbs’ 1983 anthem “Love Is the Law” is poised to become the unofficial theme song of the moment when the bill to legalize gay marriage in Minnesota becomes law, which could happen as early as next week – which will mean a big party, which will require a big party song, which is where Chan Poling and Minnesotans United come in.

“I put out the idea on Facebook, and got hundreds of responses, 97 percent of which were positive,” said Suburbs founder Poling, whose wife, Eleanor Mondale Poling, passed away two years ago. “[Artist/yogi/musician] Camille Gage put me in touch with [State Sen. and marriage-bill sponsor] Scott Dibble, who wrote me and said, ‘This is amazing and fantastic. I’m blown away. I’m cc-ing Richard Carlbom, campaign manager for Minnesota United, and Jake [Loesch], their communications director. Your generosity moves me very deeply. Really really tremendous. I’m a big Suburbs, fan, lots of memories and all that.”

So far, the Suburbs-MN United marriage has yielded a “Love Is the Law” T-shirt, proceeds of which will go to Minnesotans United, which successfully fought the anti-gay-marriage amendment and then turned to pressing for marriage equality. Poling is currently editing versions of the song to be placed on the MN United website, but it’s easy to see that if the zeitgeist picks it up, “Love Is the Law” could find new life and meaning 30 years after it was written.

The title track of the Suburbs’ 1983 Polygram album “Love Is the Law,” it served as background music to a prom scene on the sitcom “Rosanne,” and was inspired by some graffiti Poling saw while living in an apartment near Rudolph’s Barbeque in Minneapolis.

“I was walking down the street, just like the first line of the song says. I was walking down Lyndale towards downtown and Loring Park, and on the overpass that goes up to Hennepin over Lyndale was spray-painted with ‘Love Is The Law.’ This was in 1981.

“Pretty straight-ahead story, the song. It’s me, walking down the street, thinking about people suffering and needing things and seeing that sign and being enlightened, and that’s the whole damn song. And the fact that we are actually in a period or state of being now where we have to pass laws or overthrow laws or even frame in the context of law the idea of love is rather outrageous. So, it’s perfect.”

Poling regularly plays the tune, whose chant-along chorus is an irresistible and irrepressible affirmation of the transformative powers of love as any good prayer, with his jazz covers combo The New Standards.

Will perform it at Pride fest

He said he plans on playing and singing his heart out on it when The New Standards perform at the Twin Cities Pride festival in Loring Park in June. 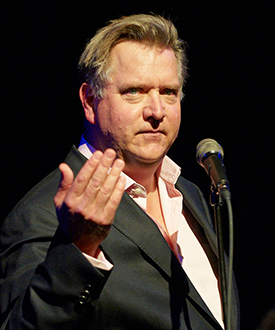 Photo by Tony NelsonChan Poling shown during an April 2011
performance.

At the moment, fans of marriage equality, civil rights, history, and timeless pop music can dream a dream of “Love Is the Law” on a loop pulsing out over John Ireland Boulevard sometime soon.

“Yeah, yeah, I know; I’m just saying DO IT,” said Poling. “We’ll bring the big band and horns and everything at Pride. It doesn’t need to be the Suburbs, you know? Get out there and sing it. Can you imagine? The hook is gold. Just singing the chorus, just chanting it, would be pretty awesome, too.”

One thing: Only 97 percent of Poling’s Facebook friends approve of the new “Love Is the Law” mission?

“Suburbs fans are all kinds of people,” he said. “One guy said, ‘Stay out of politics, you’re gonna wreck the music!’ And I said, ‘It’s not political for me. It’s about family, to me.’ And he came back and apologized.

The “Love Is the Law” T-shirt

“I’m very interested in the national debate, it’s very dear to my heart, because my son is gay and he and his partner, Thomas, have had a civil union in Vienna, where Thomas is from. And they want to get married, but they can’t. So his whole family in Minnesota and Thomas’ family in Europe and California are just waiting for a wedding. You know, we’re excited. We want to go to a wedding! And [bleep] the people who won’t let that happen.”