According to it’s official website, St. Paul is “the most livable city in America.” But in the hands of sculptor Aldo Moroni, the stomping grounds of Fitzgerald, Keillor, and Soucheray is currently being reinvented into something straight out of a Red Grooms or Dr. Seuss trip.

“My idea is to build all this and not put any words on it,” said Moroni, standing in his Northeast Minneapolis studio, surrounded by his St. Paul-inspired works-in-progress. “I’m not a real historian; I know all the details but I’m full of [it]. I’m the guy on the barstool going on and on, that’s me. That’s the deal.”

Moroni, pioneer of an art form he’s been practicing for 40 years and has dubbed “narrative sculpture,” has been commissioned by the Ramsey County Regional Railroad Authority (RCRRA) to create sculptures depicting St. Paul in four different eras of transportation boom: 1850, 1900, 1950, and 2013. The sculptures will be unveiled in October and placed on permanent display in the newly renovated Union Depot.

“There’s a funk to it,” said Moroni, who has been working eight-hour days on the sculptures for two months, and expects he’ll need two more months to finish. “It’s not an engineered piece, it’s not a digital thing, it’s not a computer thing, it’s not done with CorelDRAW or whatever. It’s mud pushed around by a guy in the middle of the night.”

Moroni’s past projects have included similarly rendered models of the state of Minnesota and a 44-foot long Mississippi River. It all bears Moroni’s sense of whimsy, history and curiosity, and the true grist of the work can be felt even in its early stages.

“I’ve studied the city a lot, and this show stars St. Paul,” he said. “I take a lot of liberties. People will go in there and look for their house, and I know there will be arguments – ‘Hey, man, I’m a member of that parish and you’ve got the steeple on the wrong side’ – but I do know the stories, I’ve done my homework.

“I’ve got the Google map, I’ve got all the best maps and hard data, and I love maps, but I’m not a cartographer. I’ve got to throw all that away to tell the big story. We want art to set the stage for dialogue. It doesn’t have to be the end-all. It’s not the answer, it’s the question.”

Still, it’s Moroni’s research and love of a good story that informs his fingertips.

“Absolutely,” he said. “At night, I get done with this [sculpting], and then I look up videos about Jim Hill and Cass Gilbert and their life stories or like … who are the O’Garas?

Go to Cossetta’s and pick up the [Upper] Levee story. What’s the history of St. Paul? That’s the fun. So in the back of your head as you’re carving, you’re doing the actual physical structures and all that, but in there is always the memory of what’s the narrative and what’s that storyline and who all these characters were and how they lived.”

Despite his claims to the contrary, Moroni remains a formidable historian whose research on St. Paul’s birth as an early-American mecca of forward-pushing transportation rolls off his tongue with rat-a-tat passion. Clearly, the artist is inspired by how the saintly city works and flows. Allow him: 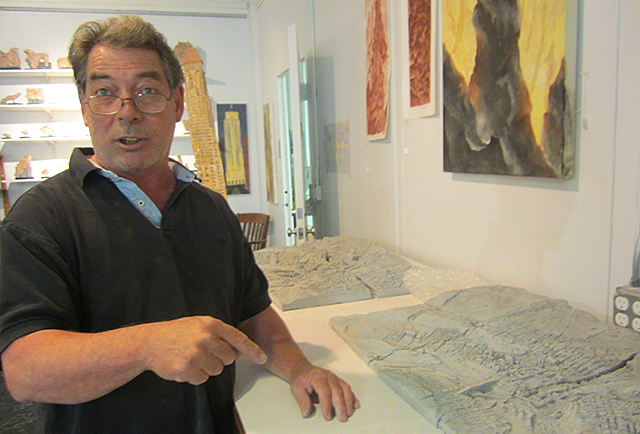 MinnPost photo by Jim WalshAldo Moroni
“This is the sketch of Pig’s Eye (Yard).

It’s got the mounds. The Hopewell people were the first real people here; now, we’re going to get in trouble here because The Dakota people are going to get really pissed, because they don’t like to hear that.

But the Dakotas lived on the other side of the river, and they looked at the mounds, which were the Hopewell people. Down by St. Louis, the Hopewell people had towns of 100,000 people, so it was already a really big deal. They had a whole civilization with elaborate architecture. They were river people and forest people; that’s the real beginning of St. Paul.

“And then you have the Lakota-Dakota people coming, and they’re being chased by the Chippewa, and the Chippewa are being chased by the voyageurs. They also don’t like to hear that history, but that’s a fact. So they’re coming out of the north, and pressuring the Dakota people off to the south. And up the river comes this crazy wacky Father Hennepin, followed a couple hundred years later by Father Galtier, and Father Galtier comes into the landing and he comes on a place where also this guy named Pig’s Eye and Father Galtier comes paddling his canoe around the corner, and he turns the bend and goes, ‘Ooh. What’s this? There’s all these caves and cliffs, and the landing, and there happens to be a bar. How nice. I think I’ll make an archdiocese here.’

“And Pig’s Eye’s thing is a trading post and a drinking station, because down river is Fort Snelling. Not far down river, just a jog; far enough from the fort where the soldiers could come and get in trouble, and then in the winter he’s got all the voyageurs coming in and all the loggers and all these other crazy people. So it’s kind of a bawdy, tough town. And then the Mississippi riverboats are coming up, bringing all the rich people into St. Paul, and they’re landing there, so you’ve got that whole development, and the first blacks in Minnesota also come at that time up on the riverboats, up the river.” 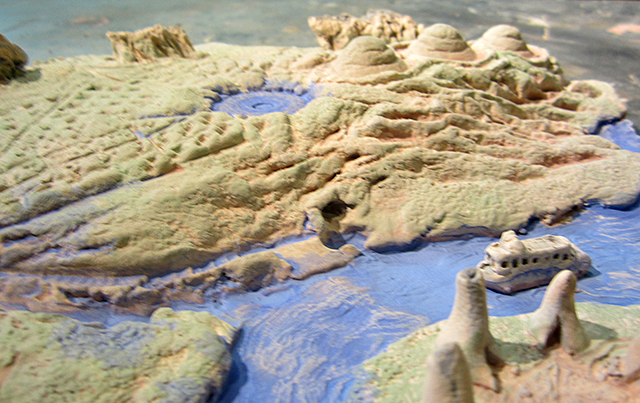 “So that’s the first phase of what St. Paul is really all about, right? Then you go over here, and this is where it starts to get interesting. This one here I’m calling ‘Jim Hill.’ Jim Hill comes in and he’s just a clerk at a shipping station, and he’s working unloading riverboats. And he figures out, ‘You know what? This is gonna be a terminus location for transportation to the Great Northwest. This is gonna change the world.’ And then Jim Hill, who doesn’t have a nickel to his name, and he’s actually out of Canada, following the voyageurs down, he sees it as the rail thing and he gets into the railroads and he builds the Great Northern and the Empire Builder. He’s the first one who understands St. Paul as, ‘This is gonna be a future capital [city].’

“So the mounds are still here up on Dayton’s Bluff, looking down over the city, and then you’ve got things like the Landmark Center. But the old capital and the St. Paul high school is a prominent structure in the city. Some of the early churches are involved in riverboat shipping, but then the rails replaced the river and that changes the history of the Northwest.

“Then you’ve got the Schmidts here, and they’re making beer, you’ve got Hamms up there and he’s making beer, and he’s looking down at the people who live in the Swede Hollow. So he’s got all these Swedes that are squatters pissing in the river and building houses on top of the river. But they’re building the railroads that link up the nation. And at the same time, you’ve got Minneapolis and Stillwater and other places are also developing, but St. Paul ends up getting the capital [city designation].” 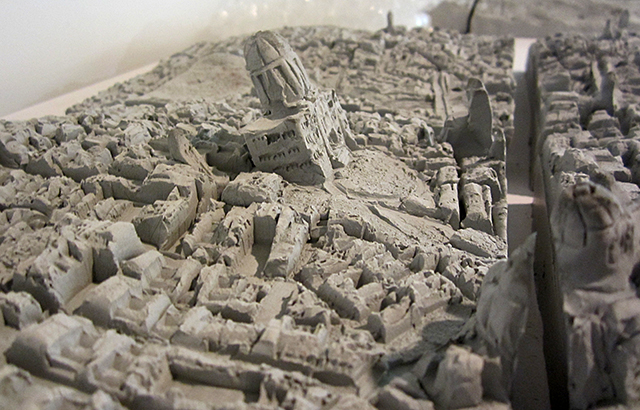 “So that’s Jim Hill’s daydream, he starts it all, then the next big one is Cass Gilbert. The state Capitol is about a thousand times scaled up from all the other buildings, because it’s the story about Cass Gilbert. He’s the visionary architect. He sees the grand city. He builds the Depot, the Capitol happens, all the grand houses on Summit, because these people are already getting rich. They might be second generation, some are first coming in, but it’s so new, it’s incredible, and it all pops at once, and with Cass Gilbert, they blanket the entire city of St. Paul with architecture, so that by 1920 it’s built.” 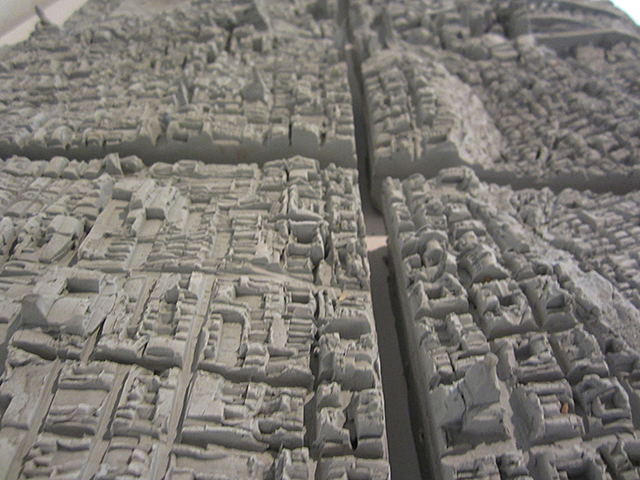 “Then it sits there. You’ve got the Rondo (neighborhood), which is part of the black history that predates what’s going on now in Frogtown. Rondo is the missing link to the history of the city, because what happened then is you get into the ‘60s, and that’s what I’m playing with now. I’m putting in this trench, which is 94, which you can see from outer space.”