This is the first of two articles exploring strategies for ensuring the continuing vitality of the Minneapolis-St. Paul region. They are adapted from a report for the McKnight Foundation’s Food for Thought series by local author Jay Walljasper. The second story will appear Thursday.

Former St. Paul mayor and U.S. senator Norm Coleman tells the story that when he moved to the Twin Cities his mother back in Brooklyn was convinced it was Minneapolis and Indianapolis.

Jay Corbalis, a 27-year-old Cornell grad who is regional coordinator of the D.C.-based Locus real-estate development firm admits, “On my first business trip I didn’t realize the Mississippi River ran through the Twin Cities.”

David Feehan, a business consultant who until recently headed the International Downtown Association, brought a tour of business leaders through the Twin Cities in 2011.

“Quite frankly, they were astounded. They had a great time,” he recalls. “This was a well-traveled group, and none of them had been to Minneapolis-St. Paul before. They had no image of it other than a cold, northern place.”

Twin Cities, we have a problem!

We’re not on most people’s radar of lively, livable, progressive, prosperous, places. The cities we compete with for business, jobs and well-educated young workers enjoy strong identities as attractive, interesting places. Seattle is Microsoft and Nordstrom. The Bay Area is high-tech and avant-garde culture. Denver is America’s beer capital and the Rocky Mountains. Portland is the capital of urban livability and young hipsters.

What we are best known for is ice, snow, wind chill, mosquitoes, the Mall of America and, if we are lucky, “Prairie Home Companion” — which does not exactly portray us as a dazzling hot spot of culture, innovation and global cosmopolitanism.

“Unless you’re from Fargo or Des Moines, you probably don’t think much about the Twin Cities, except if you’re old enough to remember Mary Tyler Moore tossing her hat in the air on the Nicollet Mall,” comments Feehan, who grew up in Minneapolis and now lives in Washington, D.C. “For a while Prince put Minneapolis back on the map, but that was a long time ago.”

That’s not fair, you might say. We’re home to more Fortune 500 companies per capita than anywhere in the country. We trail only New York in artistic activity per capita. Our parks are rated among the best in the world, our flourishing restaurants and microbreweries win national awards. We’re tops in recreational biking and civic engagement, according to experts. It’s hard to think of another place that offers so many urban and arts amenities interspersed with the natural beauty of lakes, trails, woods and the Mississippi River.

To top it off, Slate’s business and economics columnist Matthew Yglesias recently counseled, “You should move to Minneapolis.”

Here’s why: “Of the 15 highest income metropolitan areas, 14 are in high-cost coastal areas. The other one … is the Minneapolis-St. Paul Metropolitan Statistical Area.” 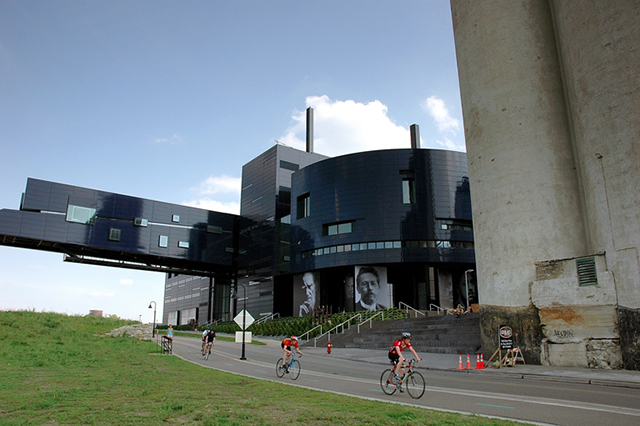 MnDOTOutdoor activity and the arts characterize our cities, but many people from elsewhere don’t know that.

But none of this makes any difference if we keep it to ourselves. To pay only scant attention to our image in a globalized age is the equivalent of relying on a landline and P.O. box with no email, Facebook, twitter, texting or Instagram. For young people especially, who’ve internalized “The Brand Called You” ethic of our times, reticence in talking up our strengths is interpreted as being feeble rather than being modest.

“We are not getting the internal migration from other parts of the country that we used to,” including the young talent who have boosted our community and economy over recent decades, says Caren Dewar, executive director of the Urban Land Institute (ULI), which is sponsoring the Greater MSP Ahead program to discuss how to ensure a bright future for the region.

The accomplishments of Minneapolis-St. Paul have always depended on a steady stream of industrious and innovative folks coming here from across the Midwest and points distant. Met Council statistics show that 141,000 more people moved away from the Twin Cities to other parts of the country than moved here between 2001-2010. We’re projected to lose 180,000 more by 2040. “That’s a cause for concern,” Dewar says.

And it’s why over the past few months I have talked to more than 30 urban experts and leaders in a variety of other fields about how the Twin Cities could tell its story more forcefully in a project sponsored by the McKnight Foundation. I also explored what we must do to make sure we have a better story to tell. Looming problems, from the achievement gap to the decline in new businesses cloud our future, which are the focus of an article to follow tomorrow in MinnPost.

What’s in a name? Plenty!

Part of the answer is changing our name. Seriously. When I sat down with Minneapolis Mayor R.T. Rybak to talk about the Twin Cities’ identity crisis, he politely inquired: “Can I ask you not to call us the Twin Cities? It makes it sound like we are only half as good as the Quad Cities.” Michael Langley, president of Greater MSP, informed me there are at least 150 places around the world that call themselves the Twin Cities.

Even worse than “Twin Cities” is the habit of calling ourselves “Minnesota,” according to Steve Berg, a veteran journalist who’s covered urban issues at MinnPost, the Star Tribune and other publications.

“The sign at the airport says Welcome to Minnesota, as if there isn’t a city here,” he says. Same goes for the Twins, Vikings, Timberwolves, Wild, Lynx, Orchestra, Dance Theater and other nationally known institutions that could raise our profile.

Langley doesn’t think “Minneapolis-St. Paul” hits the mark either. It’s a seven-syllable mouthful that doesn’t exactly roll off the tongue. No other region of a million people anywhere around the world has a longer name except Fukuoka-Kitakyushu, Japan. And if you’ve never heard of Fukuoka-Kitakyushu, its name may be the reason.

Langley prefers MSP, which also happens be the name of the new organization he heads to attract and retain investment in the 16-county metropolitan region — Greater MSP. It sounds sporty, like LA, DC or NYC. It also happens to be our 3-letter Airport code, which other cities like Portland (PDX) are adopting as monikers.

Back to our story

Overall we have a good, but no means perfect, story to tell. So how do we tell it better?

Jeff Berg, creative director at Olson, which is famed for branding campaigns commissioned by everyone from the Detroit Pistons to Pepsico, says it’s elementary marketing: “We have to figure out what makes us unique from other places. How are we different from, say, San Francisco?”

Off the top of his head, he rolls out some ideas. “Consider the dress code for most men here: flannel, jeans, boots. Does that not say hardy pioneer stock? How do we get people to consider us as a place to live? Maybe they have to ask themselves: Am I hardy (and hearty) enough? Do I want to be a pioneer of industry, live in the land where creativity is demanded? Am I looking for the easy way or the road less traveled? There’s a great play of words here — Minnesota: Can you weather it?”

There are advantages to our long winters too, says Berg, who grew up in Eugene, Ore., and moved here from New York City. “We huddle together in ways you don’t see in other communities. We work together in civic ways to make things happen.”

In a similar vein Sam Newberg, who grew up here and writes the Joe-Urban blog, says, “If I was to sum us up in one word it’s ACTIVE. We’re involved politically and in our communities. We ice fish and ride our bikes all winter. We open up our own brewpubs and spend the long winters discussing ideas with our friends. We’re just active.”

Jay Walljasper writes, speaks and consults about urban and community issues. He is author of “The Great Neighborhood Book” and “All That We Share: A Field Guide to the Commons.” For many years he was editor of Utne Reader and now edits OnTheCommons.org. This is the first of four reports he is writing for the McKnight Foundation about the prospects of the MSP region. His website is: JayWalljasper.com.

Minneapolis-St. Paul’s identity crisis could mean trouble for our future