The Minnesota Orchestra board has made a move that will reverberate — for better or worse – into the future.

Faced with negotiating crunch time, the board seemingly ignored a confidential mediation process and came out with an offer that’s loaded with positive public-relations strokes for the board but may only be seen as insult to locked-out musicians.

As usual, it’s hard to get a sense of what the other players on both sides think of Thursday’s surprising contract offer. Other than officially designated talkers, most members of the board and the orchestra have stayed silently on the sideline. Update: On Saturday the musicians rejected the new offer.

But on the surface, the Orchestra Board’s offer seems more like another ultimatum than a genuine effort at resolution. After all, if this were a sincere effort to settle, why wouldn’t the board have made the offer through Mitchell’s mediation office instead of sending news releases to newspapers, television and radio stations?

‘Time is running out’

“We are offended that they unilaterally left the mediators’ confidential process,’’ said musicians’ spokesman Blois Olson. “The musicians will continue to work through the mediator.’’

In the news release produced by the Orchestra board, Richard Davis, the chairman of the board’s negotiating committee, didn’t mention the mediator.

That part – time is running out – seems to be true. Although deadlines can change, Sept. 30 has loomed large in this dispute for some time. Conducter Osmo Vanska has said that his orchestra must be able to begin practicing by Sept. 30 if it is to be ready for November dates in New York’s Carnegie Hall. If there hasn’t been a settlement by then, Vanska indicated he might be out the door.

At a time when there have been hints of negotiation and movement, this offer does have a feel of finality to it.

For weeks, there have been hints that at least a handful of board members have been trying to reach out to musicians as well as the region’s biggest gift-givers to end the lockout. Marilyn Carlson Nelson was believed to be the leader of that group of board members. (Others in that small group asked not be quoted for this story.)

But Thursday’s offer makes it clear that Carlson Nelson is again a board insider – and perhaps never was working on the outside.

According to a news release from the Orchestra Association, Carlson Nelson, through the Carlson Family Foundation, did convene a meeting of 15 Minnesota foundations and those organizations came up with a “one-time bridge grant to enable a resolution in the long dispute.’’ 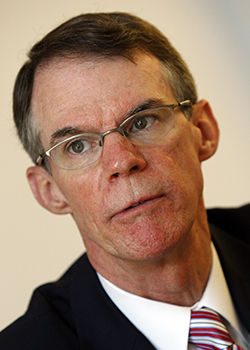 Carlson Nelson, who could not be reached for comment, was quoted in the Orchestra board’s news release as if a great step had been taken toward resolution.

“We consider this a unique offering, born of shared respect for the Orchestra and in recognition of so many Minnesotans committed to finding a solution,” she was quoted as saying.

From the musicians’ viewpoint, the problem is that the grant – the amount was not disclosed – still means musicians would be expected to take salary cuts that would amount to more than 17 percent over the life of the three-year contract. The musicians would receive a one-time bonus of $20,000 to soften the blow of the cut.

It should be noted that the Orchestra board is saying that its offer means the board would not be able to eliminate the orchestra’s $6 million annual deficit. Instead, smaller cuts to musician salaries – at one time, the board was seeking 32 per cent salary cuts – would be about $3.6 million over three years, even with the bridge money, according to Jon Campbell, the board chairman.

Campbell and  Davis, the negotiating chairman, have taken heavy flak from supporters of the musicians. This newest offer seems, in part, to be a flak jacket for the two. Campbell is an executive vice president of Wells Fargo Bank, and Davis is the CEO of U.S. Bancorp. Foundations from those two banks were cited for coming up with funds for the bridge funding.

But this wasn’t just the big bank foundations chipping in, according to the Orchestra Board’s release. There were 13 other foundations AND and an organization of orchestra fans called SOS-Save Osmo. That group has seemed to have been empathetic to the musicians.

The participation of SOS-Save Osmo surprised at least one member of that organization. The contract proposal doesn’t meet the criteria originally outlined by the group, said Lee Halker, an SOS member. He was sending out emails this morning, seeking answers to questions he has about the SOS role in the new proposal.

If the offer was intended to isolate orchestra members ever further from the community, it perhaps will succeed. The board proudly proclaims orchestra members will receive an “average’’ annual salary of $104,500.

Average, of course, is a misleading figure. Salaries in the orchestra would actually range from $89,000 to $150,500. Beyond that, acceptance of this contract would likely knock the Minnesota Orchestra out of the top 10 in terms of wages paid to musicians. That may not be a big thing to most working people, but it matters if you’re trying to promote yourself as one of the nation’s best orchestras.

What’s not at all clear are the small-print details so important to most contracts.

But with trumpets blaring, leaders of the orchestra’s board are saying that union leaders should offer the proposal for a “secret ballot” before noon Monday, when the offer apparently will be pulled back.

It’s that big, public take-it-or-leave it tone that seems most troublesome for the future of the orchestra. Ultimately, an orchestra and its patrons must be unified to succeed. Even if the offer were to be accepted by a majority of the musicians, it would be divisive far into the future.