It was a beautiful night for a high society ball at Orchestra Hall in downtown Minneapolis Friday night – unless you’re the sort of attendee who’s easily vexed by patches of rain, pesky protesters, and locked-out musicians.

Long a highlight of the Twin Cities social calendar, the Symphony Ball drew a few hundred Minnesota Orchestra patrons to the newly redone building inside, while outside on 11th Street, the Nicollet Mall, and Peavey Plaza, members of the orchestra and their supporters played music, sang songs, and Minnesota-nicely heckled attendees who scooted from their cars and into Orchestra Hall.

The rally was organized by SOSMN, which said in a press release beforehand, “It is not SOSMN’s intention to vilify the donors who are attending the two ball events, but rather to celebrate music and musicians while asking ball attendees to use their influence to bring back the orchestra.”

Some snapshots of people outside the hall: 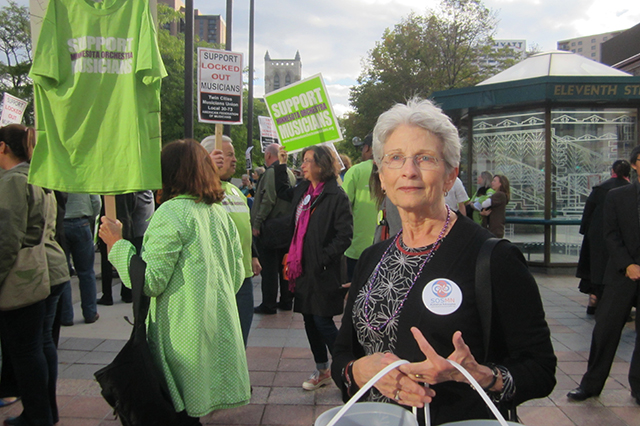 “I just moved here two and a half years ago, and I loved the Minnesota Orchestra. The first year I moved here I would join the coffee groups that would meet Thursday mornings here. The bus would pick me up at Southdale, and I would come here and listen to the wonderful music and I thought I’d died and gone to heaven. Then it stopped.” 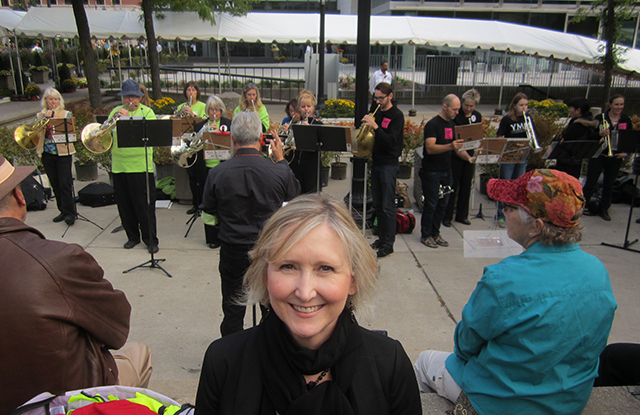 “I’m a musician. I’ve been locked out for 11 and-a-half months. I miss the magic chemistry I have with my colleagues and friends on stage; it’s a really intimate work we do together. I miss that camaraderie and sharing that with audiences. I love it when amazing musical moments happen that you don’t expect and you feel like you’re part of something much bigger than yourself.” 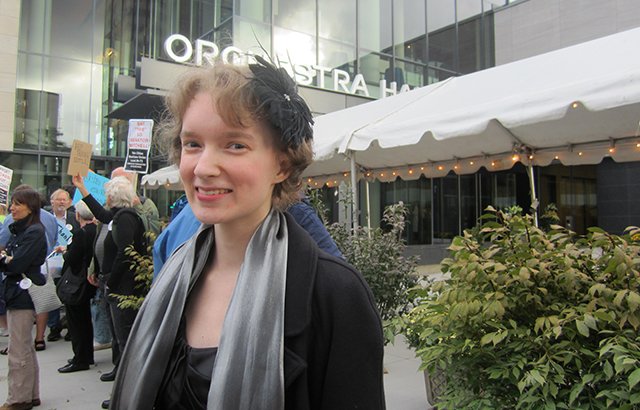 “I’m a writer and freelance violinist and violist, and I write the Song of the Lark blog, which has been covering the lockout for the last year. I miss the emotional and spiritual fulfillment that I get from a live performance that I can’t get from a recording – especially with an orchestra the caliber of the Minnesota Orchestra, and especially when you get to know all the people who are on stage. You see their faces in program books, and you memorize their biographies, especially being a young musician growing up in this area, that was [impactful]. I still have my program from the first time I came here 10 years ago … .” 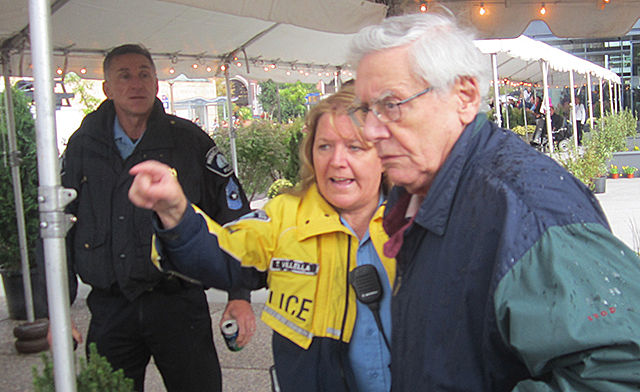 “They told me I couldn’t stand under that awning to get out of the rain. I’ve got $10,000 in my will for the orchestra, and they won’t let me stand under there to keep dry. I’m 86 years old, I shouldn’t be standing out here in the rain, but I feel so angry about this situation. I care about music, I was the founding president of The Greater Twin Cities Youth Symphonies, I’ve got a son who has written a college textbook on conducting. I care about serious symphonic music, and I miss it, but it’s never going to be as good in my lifetime as it was.” 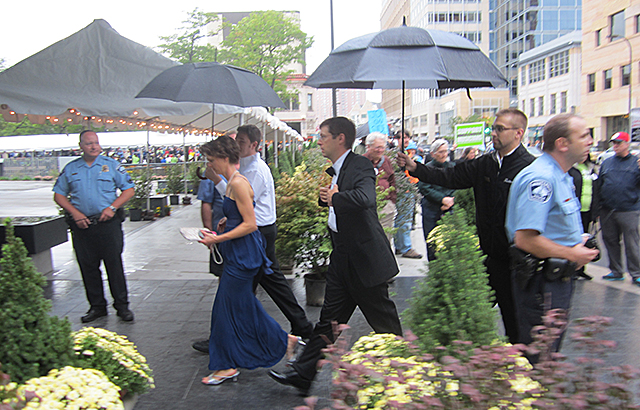 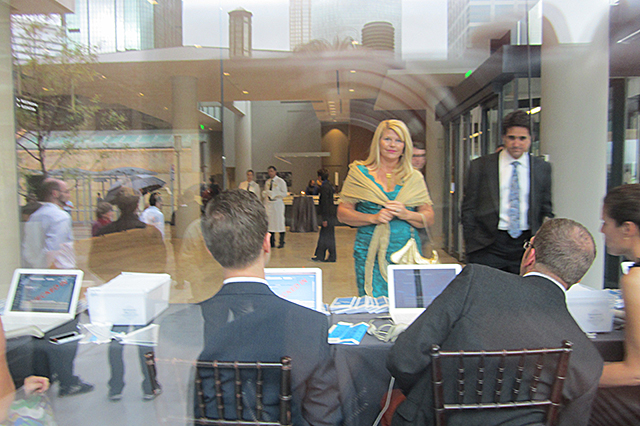 MinnPost photo by Jim WalshNo press was allowed inside the Symphony Ball. Here’s a picture of some attendees checking in for the silent auction, taken from outside the window. 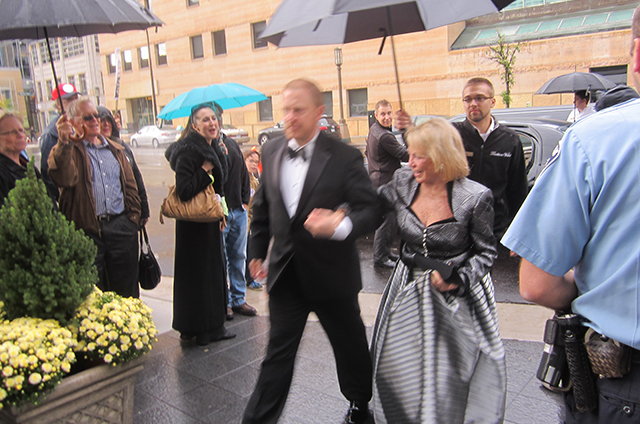 MinnPost photo by Jim WalshTuxedos and gowns were in order for most gala attendees. 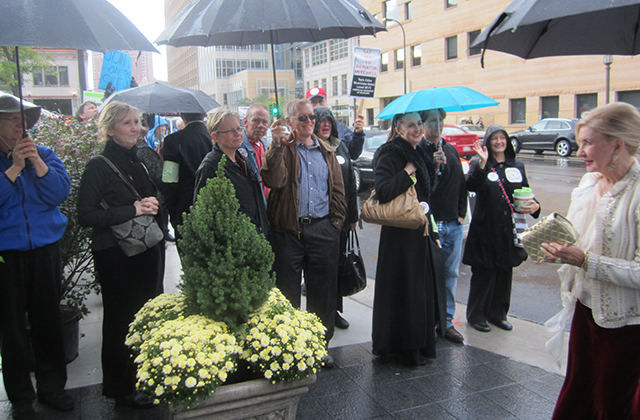 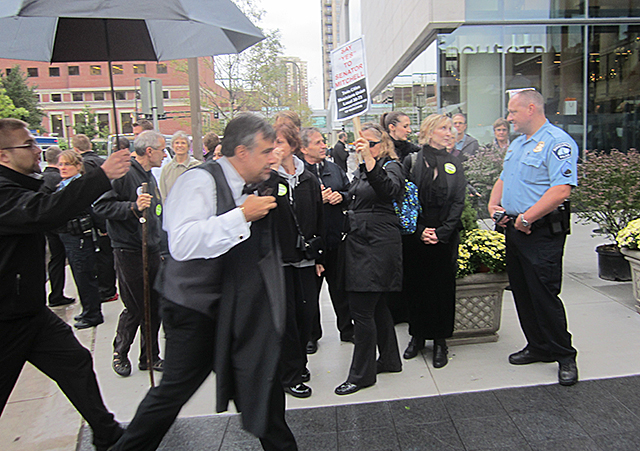 MinnPost photo by Jim Walsh“Thank you for supporting the music! Thank you! Thanks for coming!,” shouted musicians and their supporters, as cars cruising past honked horns in support. 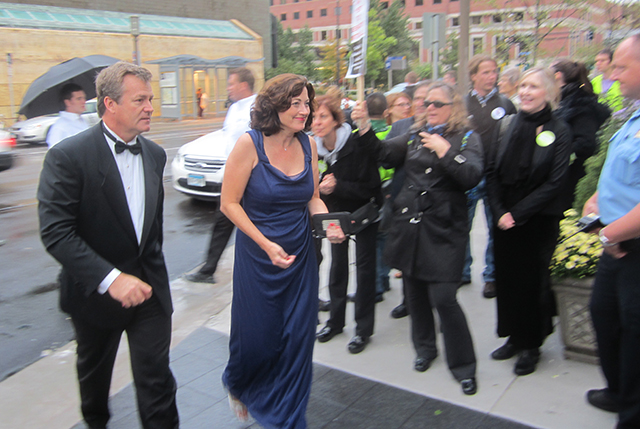 MinnPost photo by Jim Walsh“Have a good evening. Thanks for bringing the music back! Help bring our music back.” 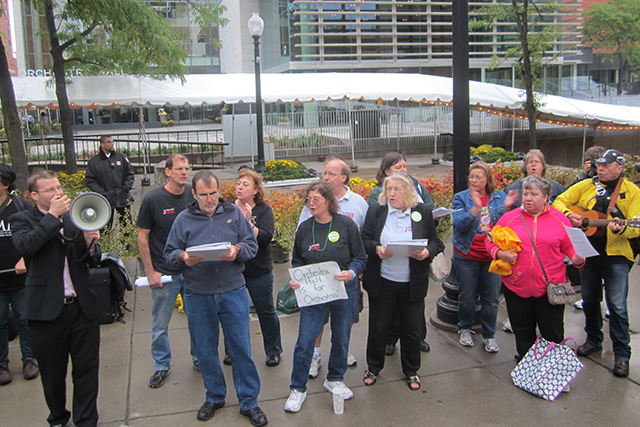 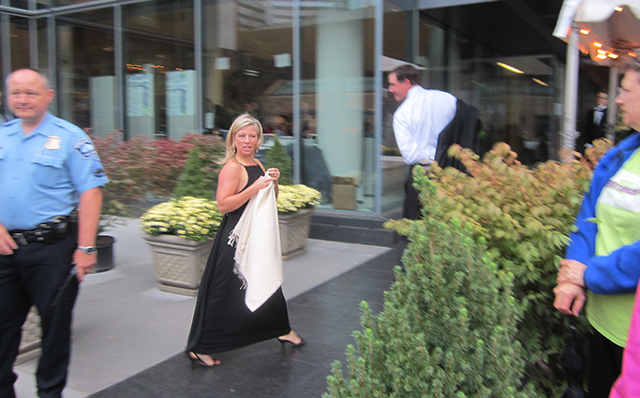 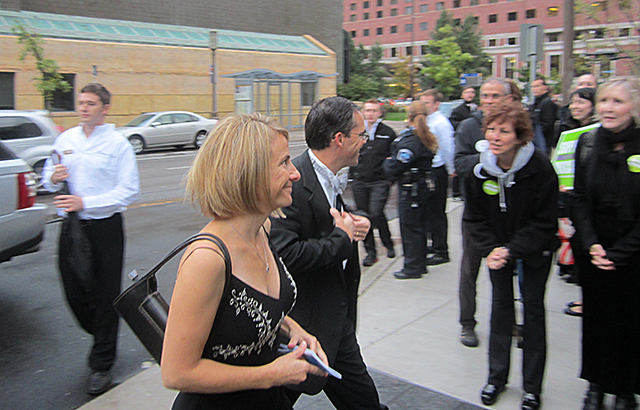 MinnPost photo by Jim WalshToward Champagne and the ball. 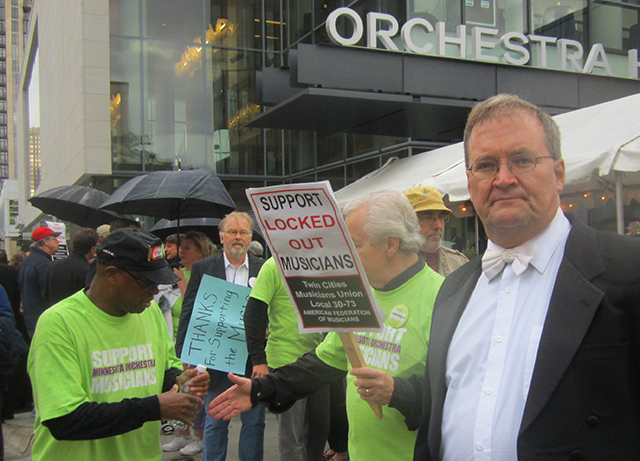 “I play bass in the orchestra. This is my home, I’m from here, and I hate to see this happening to the orchestra I grew up with.” 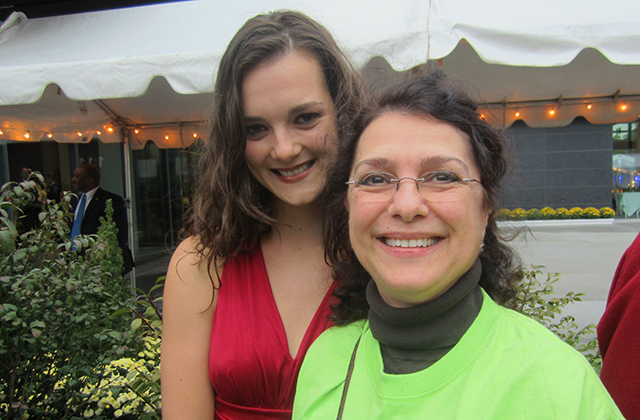 Mara: “I’m a musician’s daughter. To not have music, to not have art, to not have creativity is to live a sad and empty and meaningless life. I’m here for the musicians and to tell the people going in that I wish them all well and hope they have a great time.” 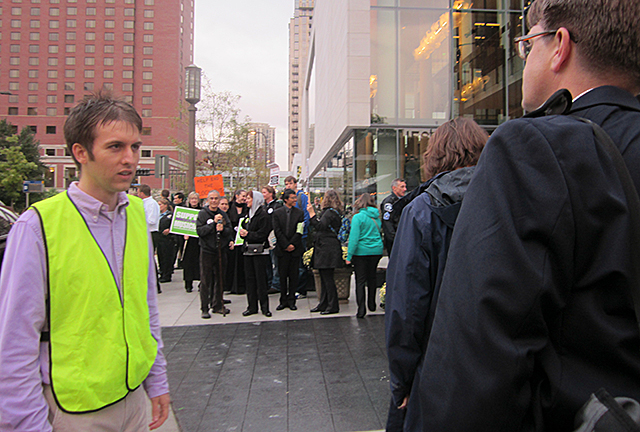 MinnPost photo by Jim WalshThis fellow’s job was to keep people off the sidewalk. 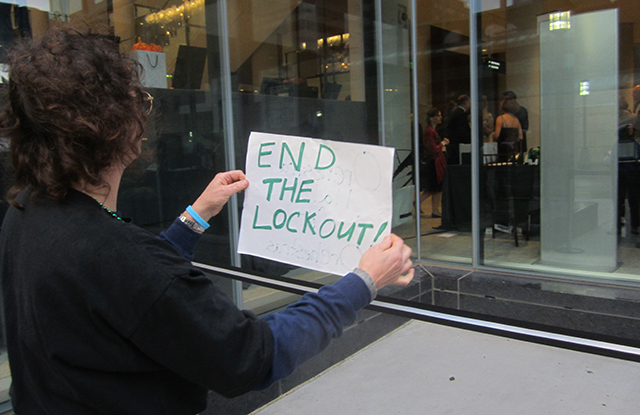 “Something drastic has to happen. There’s got to be a way to lock ‘em all in a room until they come to an agreement.” 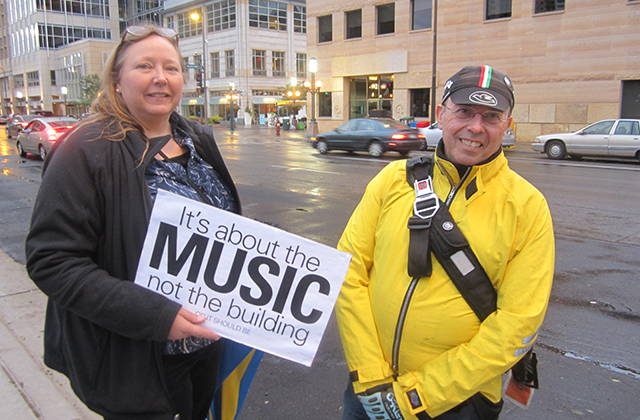 “I hate to see us pour all kinds of money into a building, and then we can’t even do what the building is for. We have the same problem with the public library. We tore down the library, built a big new library, and then we had to cut back the hours because we couldn’t pay the librarians.” 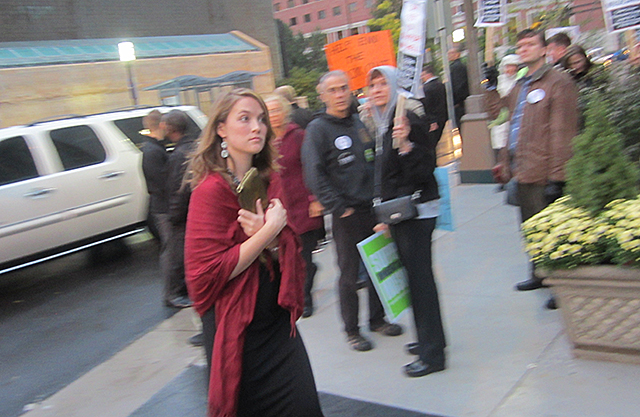 MinnPost photo by Jim WalshMara Anderson: “I love your dress! Where did you get it? Have a great time!” 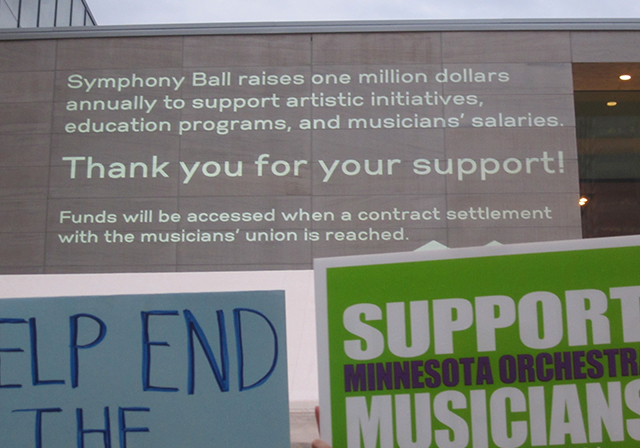 “What’s not in dispute is that we have a great orchestra, a great music director and great musicians,” retired Cargill executive Ben Jaffray told the Star Tribune Friday.

“But there are also the financial facts, that we had a $6 million deficit last year.” 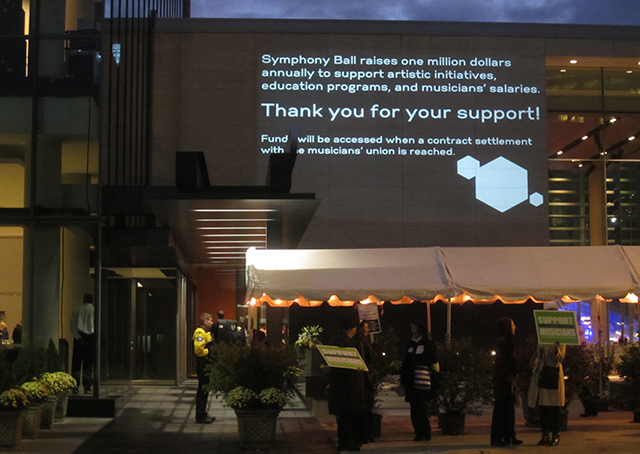 MinnPost photo by Jim WalshWinding down. 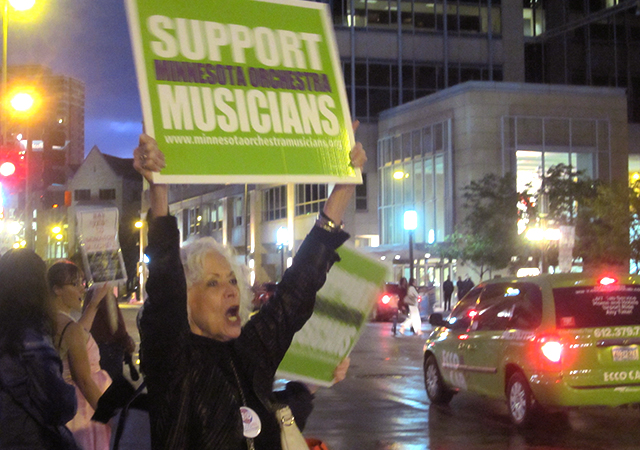 “I had season tickets. I miss the gorgeous classics. This orchestra is one of the most exceptional orchestras in the world, and we as a community cannot give them up. If we do lose them, you will lose an elation that is unsurpassed. Also, I will never put the members of the association down. These people are successful, and have put time and effort into this orchestra. I’m not putting them down, I respect what they’ve done, but I support the musicians.”