CHICAGO —  A steady stream of early exiters was hoofing it out of Humboldt Park here early Sunday evening when one old-timer said to a group of youngsters, “Where are you all going? You’re going to miss the Replacements.”

“Who?” said a bearded young kid, with a knowing smirk, and kept walking.

Legendary band or not, a steady downpour of rain and drizzle over Illinois dampened the physical stamina and staying power of many of the 20,000 concert-goers who attended the Chicago installment of Riotfest yesterday, but nothing could squelch the sheer visceral force – or spirit of community – that ignited the latest version of the Replacements’ first show on American soil in 23 years.

Over the course of a blistering 75-minute set, co-founding band members Paul Westerberg and Tommy Stinson (and newly installed drummer Josh Freese and guitarist Dave Minehan) ripped through such Replacements classics as “I Will Dare,” “Alex Chilton,” “I Don’t Know/Buck Hill,” “Left of the Dial,” “I.O.U.,” “Raised in the City,” “Can’t Hardly Wait,” “Hold My Life,” and “Swingin’ Party,” during which an especially wired Westerberg chided Minehan for not knowing the song’s chord progression. (Westerberg also destroyed the stage clock early in the set, and took out a couple of mic stands along the way for good measure).

Sloppy mechanics aside, hired guns or no, the band was in full-bodied rock mode from the outset, and as it unfurled one magical song after another, it was impossible to find a comparable moment in its storied history. Many of the teens and 20-somethings who first fell in love with the Replacements now have teens and 20-somethings of their own, and all concerned make up a tribe bonded by Westerberg’s ability to express the joy and ennui of adolescence and adulthood, both.

To that end, the sight of fans of all ages from all over the world singing along to words to songs that are normally heretofore experienced exclusively in solitude, and the sea of scrunched-up faces and thrusting fists during “Bastards of Young” brought to mind something I wrote in the introduction to my 2007 book, “The Replacements: All Over But The Shouting: An Oral History”: “At the moment of this writing, there are rumors flying about a Replacements reunion. Check that. They aren’t rumors. They’re wishes. And they’re being cast out there by a bunch of newbies and grownups who don’t necessarily want to go out and drink and get stupid with the ‘Mats, but who want to know that those songs, all those great songs, are alive, being played across the land somewhere, gleaning new meaning and perspectives.”

Seven years later, wishes come true: The latest version of the Replacements hoisted its flag at Riotfest in Toronto on Aug. 25, and sets up in Denver next Sunday, Sept. 21. The first two reunion shows have been powered not by nostalgia but by the band’s potent and accumulating force, and Westerberg’s still-gut-wrenching-after-all-these-years songs, which remain indestructible even to the guys who first gave them breath. 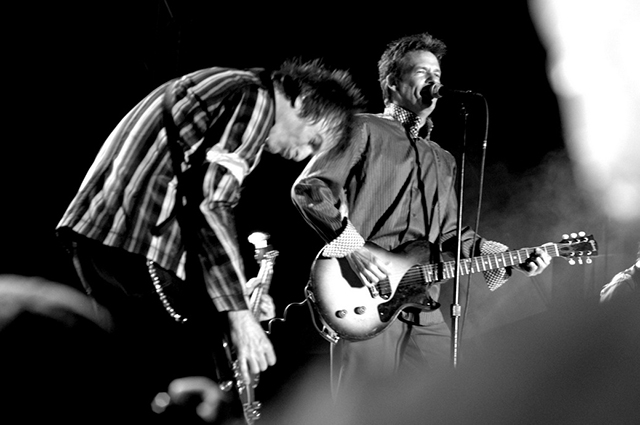 For anyone who values raw heart and true passion, the 53-year-old Westerberg is as emotive a singer as has ever opened his veins, and for that reason alone it was a special 75 minutes in Chicago yesterday. Even through the fatigue, wetness, and cold, there was a palpable sense that the Stinson-Westerberg chemistry is intact and fiercely fecund, and that the beginning of a new ‘Mats chapter is being written with these Riotfest shows, though no Twin Cities dates have been announced yet.

Who are the Replacements? Good question, especially in 2013.