“You’re going to have to clear this area,” said the perky and control-freaky Sony Pictures rep, interrupting the only interesting interview there was to be had at last night’s “red-carpet event” at the Grandview Theater in St. Paul.

The gathering was celebrating the success of the young Somali-born Minnesota actors (Faysal Ahmed, Barhad Abdiriham, Mahmet M. Ali) who star with Tom Hanks in “Captain Phillips,” which, when all the patriot dust settles, amounts to little more than a vile race-baiting vehicle and recruitment tool for the U.S. Navy and Navy SEALS disguised as a Hollywood feel-good action thriller.

“We’re going to keep talking,” I told her, ignoring her obvious displeasure with me interviewing a non-approved Somali source on her watch, Omar Jamal, charge d’ affaires of the Somali Mission to the United Nations. Before he was shooed off the red carpet and into the night, I asked Jamal if “Captain Phillips” reflected the depth and roots of the desperation of the war- and poverty-torn Somali people.

“No, not at all,” he said. “They were looking for a livelihood. The film really only depicts these kids as criminals, going after money, it doesn’t mention about the background of piracy. How did this happen? It didn’t happen overnight. The piracy was the reaction to a toxic-wasting, illegal fishing of corporations in that part of the world. So the movie completely ignores that part of the story. It’s the story told through the eyes of Captain Phillips; the movie is a very good movie, but the community is concerned about the lack of the background of the pirates of the story. That’s our immediate concern.”

The Grandview was filled with members of the gala’s organizing group, Minnesota Women in Film and Television, and about 30 friends and family members of the actors. The advertised “panel discussion” never happened at the hastily organized screening, with organizers instead opting for trotting out the Minnesota actors (including veteran character actor and songwriter Chris Mulkey, who grew up around the block from the Grandview) on stage for a round of applause, followed by a screening of the movie.

But all of the Oscar buzz, slobbering reviews, and box office success has steamrolled over early warranted criticism of the film like this from Armond White, not to mention any other movie-goer who might question the high-def wide-screen image of the entire U.S. Navy hunting down three scared black kids. 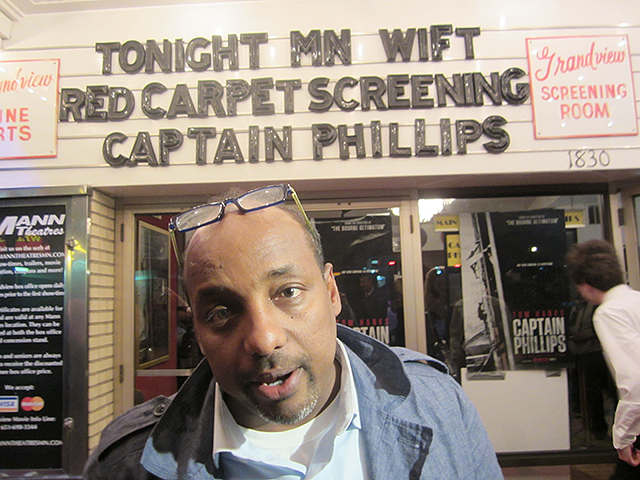 MinnPost photo by Jim WalshOmar Jamal, charge d’ affaires of the Somali Mission to the United Nations: “The film really only depicts these kids as criminals, going after money, it doesn’t mention about the background of piracy.”

That’s the movie. Who green-lighted this? Why are we supposed to care about this story, again? And is it just me, or did Tom Hanks sound defensive when he told the Wall Street Journal, “This underlying hopelessness because of the geopolitics of what a disaster Somalia has become … just adds to the fabric of the movie that makes it rise above the concept of ‘scary aliens have invaded us and we have to make it home.’ ”

Spare me. “Captain Phillips” is a crass money-maker based on Hollywood’s formula and America’s insatiable appetite for easily digested good guys versus bad guys, white versus black. And while we’re at it, here are a few potential questions for the gathered actors and filmmakers that would’ve been good for a panel discussion, were it a real movie event:

• Is there any part of you that feels exploited by the Hollywood system?

• Did you know that the real Richard Phillips is being sued by his entire crew over the incident and over statements he made in his book, “A Captain’s Duty: Somali Pirates, Navy SEALS, and Dangerous Days at Sea,” upon which the film is based on?

• Did the pirates really call Captain Phillips “Irish,” or was that a convenient trumping-up of the good captain’s Caucasianness versus the dark-skinned devil boys of the Somali coast?

• Did the pirates really curse America and the USA (in English, no less) throughout the ordeal? 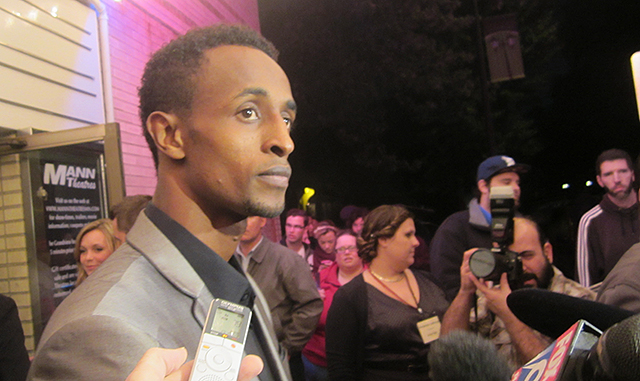 MinnPost photo by Jim WalshFaysal Ahmed, one of the three Minnesota actors in the film, speaking with the press outside the Grandview.

Alas, last night all we got was sound bites and the red carpet, and a search for a decent documentary on Somalian pirates.

“Everyone will have their own opinions, but from my point of view, four Somali youth went out and went through this, and they didn’t do it because they wanted to but because the environment around them forced them to,” said actor Ahmed, responding to Fox 9’s Tom Leyden’s question about how Somalis are portrayed in the film. “The movie has different layers, and that’s part of it. Somali people are like everybody else. Some good, some bad.”

At that, the Sony rep hurried the young actor away for a photo shoot and another round of his and his buddies’ turn in the spotlight.