Finnish maestro Osmo Vänskä, who resigned as music director of the Minnesota Orchestra on Tuesday morning, hasn’t spoken with the press since. But he picked up the microphone after each of the three farewell concerts he led this weekend at the Ted Mann Concert Hall with the musicians he brought to international renown over the past decade.

Here’s what we heard at the final concert Saturday night – after “The Star-Spangled Banner,” the not-on-the-program “Egmont” Overture, Beethoven’s Piano Concerto No. 3 and Mozart’s Piano Concerto No. 27 (both featuring pianist Emanuel Ax), and Igor Stravinsky’s Suite from “The Firebird.” Visibly moved, Vänskä turned to the sold-out crowd and said:

Thank you very much. This might be the last time I have the chance to conduct this great orchestra. I don’t know what to say … except for just that I’m going to miss you all very, very, very much.

I’m going to miss these great players so much that I don’t know even yet. Thank you. Thank you, everybody.

I thought that I would like to leave you with one piece of — of course — Sibelius.  He wrote it to one play, and there’s a story behind the piece.

And then there’s a moment when this lady understands that she’s not dreaming anymore, that it’s reality, and she’s dancing with Death. And at that moment, she understands that it’s her time. She dies. After that, we need only three church bells coming from the violin at the end. 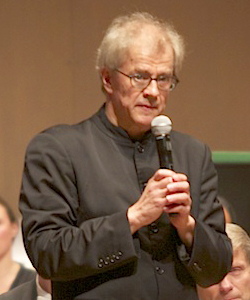 So this is Sibelius’ “Valse Triste,” from the play “Death.”

And I would like to add one more thing. You have been a great audience tonight. You have given so many applause. Thank you for all of those.

I ask you to hold your applause after this encore. I have to say that the situation here is terrible, and the orchestra is in so terrible and … and … like almost hopeless situation right now, and that situation doesn’t need any applause.

As the final notes of “Valse Triste” faded, Vänskä and the musicians left the stage in silence, and the crowd left the concert hall in near silence.

On YouTube, you can hear Vänskä speak,  “Valse Triste” in its entirety, and the sounds of Vänskä’s footsteps and those of Concertmaster Erin Keefe as they walk off the stage ahead of the other musicians.

Osmo Vänskä’s farewell concerts end in a thank you, and silence