I had no idea what I was going to say to Sarah Palin when I got in line to get an autographed copy of her new book for my dad at the Mall of America rotunda Friday. I was an embedded journalist in the culture wars, interviewing her fans and followers; she was on the last stop of a book tour promoting “Good Tidings and Great Joy: Protecting The Heart of Christmas,” a 238–page mission statement (complete with recipes!) on how to preserve “Merry Christmas” as the world’s go-to holiday greeting.

I was near the end of the line, about a thousand deep, and as my face-to-face time with the one-time vice presidential candidate drew near, I realized I was at a loss for words. Turns out there would be no personalized autographs, so I was left with a dilemma: What to say to one of the most pilloried and polarizing figures in modern-day politics while simultaneously preserving my own soul?

As I stood in line perusing the steady stream of mall-goers who were gawking, snapping photos, and snickering at Palin and her flock, I flipped open my copy of “Good Tidings” to find, on the first page I turned to, one of my favorite C.S. Lewis quotes:

“To love at all is to be vulnerable. Love anything and your heart will be wrung and possibly broken. If you want to make sure of keeping it intact you must give it to no one, not even an animal. Wrap it carefully round with hobbies and little luxuries; avoid all entanglements. Lock it up safe in the casket or coffin of your selfishness. But in that casket, safe, dark, motionless, airless, it will change. It will not be broken; it will become unbreakable, impenetrable, irredeemable. To love is to be vulnerable.”

Then and there I decided to give Palin the most open-hearted greeting I know. It happened fast, on a stage flanked by a massive screen bearing Palin’s image, huge silver Christmas trees, and the glittery ornament-stuffed windows of Callister’s Christmas store.

It happened just after I took this photo of Palin waving to fans in the upper concourse, just after the mall worker in an elf’s hat took my jacket and put it in a blue carrying bin, TSA-style, to be retrieved after my audience with the former governor of Alaska. 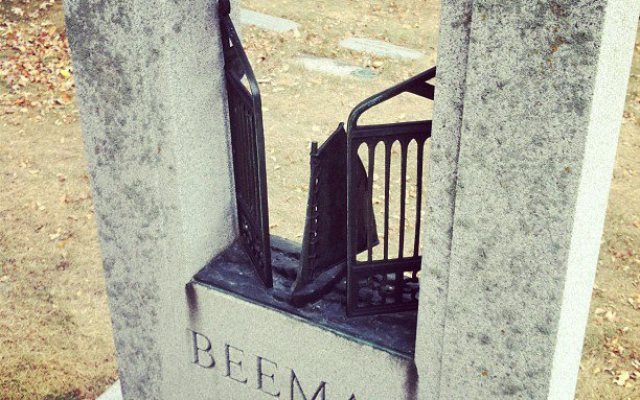 “Well, hello! What’s your name?” said Palin, the sing-songiness of which reminded me of my days on the Santa Claus circuit and that Palin’s visit coincided with opening day of Santaland at the mall.

I took a step back from the desk, clasped my hands in prayer, bowed to her, and said, “I just wanted to say, ‘Merry Christmas’ and ‘Namaste.’ ”

“Yoga?” I stammered, a little flustered at hearing “downward dog” in her famously folksy accent. “What yoga do you practice?”

“Bikram,” she said, obviously surprised to find herself talking about yoga in the middle of a war on Christmas.

“Of course that’s what you do. That’s intense,” I said.

“But I gotta get back to it. It’s been two weeks!” she said, flashed two fingers, and I was outta there. 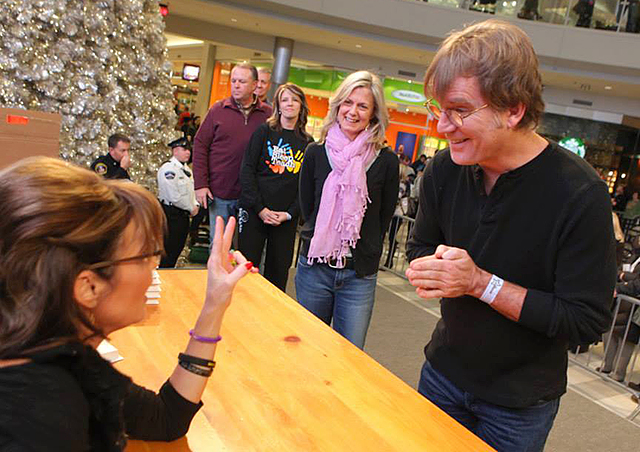 “Go get it, baby,” I said, pounding my heart and flashing her the peace sign as I walked away. She grinned and stared, and as I headed out I entertained a fantasy of Palin’s next book taking on “namaste” and her next act as a soldier of yoga, mindfulness, Eastern spirituality, and Fox News’s correspondent from Burning Man.

Which is unlikely to happen anytime soon, given the fact that the one time the word “namaste” appears in “Good Tidings” is sarcastically, on page 17, uttered by Palin’s fictitious “angry atheist” character, Joe McScrooge. Nope, for the moment and for all eternity, she’s all about “Merry Christmas,” as are the rest of the fans, shoppers, and fellow Christmas preservationists I waited in line with: 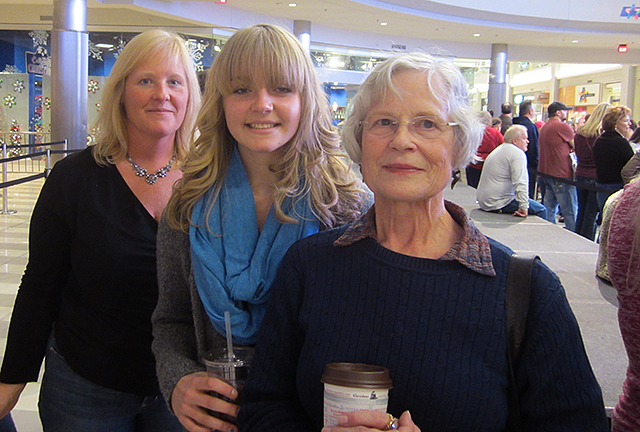 Nancy Watson, Brainerd; Laura Watson, Brainerd; Karen Wold, Park Rapids. “I like Sarah Palin. I think she’s a strong woman and a good role model, and she stands up to people for her beliefs,” said Laura. “I think it shouldn’t be offensive to say ‘Merry Christmas’ versus ‘Happy holidays.’ In school, they change things so they’re more correct, but I believe that if you celebrate Christmas you should be able to say, ‘Merry Christmas.’” 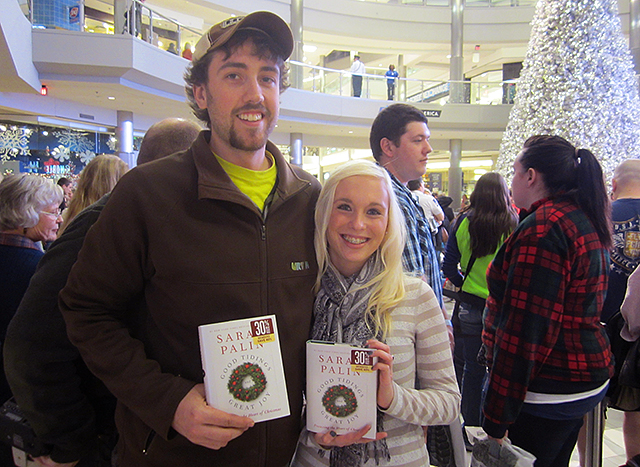 Zach Pilarski and Sarah Watzky, St. Cloud. “I’m a machinist at a factory in St. Cloud,” said Zach. “I came to see Sarah Palin because she’s awesome. She has great politics, great values, and everything she believes in I agree with. I think she’s standing up for what’s right. I’m supposed to accept everything else – everything else – but I have to stop saying, ‘Merry Christmas?’ I don’t accept that.”

“I’m a senior at St. Cloud State, studying international business and management,” said Sarah. “Going to a public state university, we know what it’s like not to be able to talk about Christmas or advertise it on campus, and that really bothers us because we really do like the religious aspect of it. Why do we have to say ‘holiday tree’ instead of ‘Christmas tree?’ It’s building up. Nobody should be prohibited from saying ‘Christmas,’ just because somebody might be offended. I’m from Germany, and it’s not that big of an issue there. I mean, our leading party is called the Christian Democratic Union, and nobody seems to have a problem with that.” 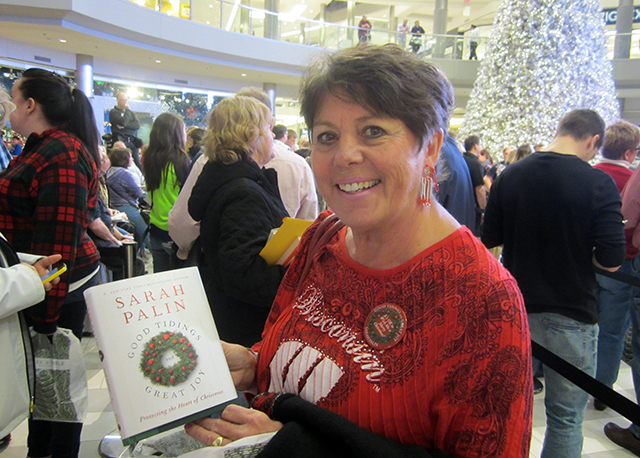 Carolyn Messer, Janesville, Wis. “I’m the former librarian for [former Wisconsin presidential candidate] Paul Ryan, now I’m a tour director with a bus company, and that’s how I’m here. I’m with 43 other people I brought with me on my bus today. I agree with her book, that’s why I’m wearing my button that says, ‘It’s OK to wish me a ‘Merry Christmas.’ ” 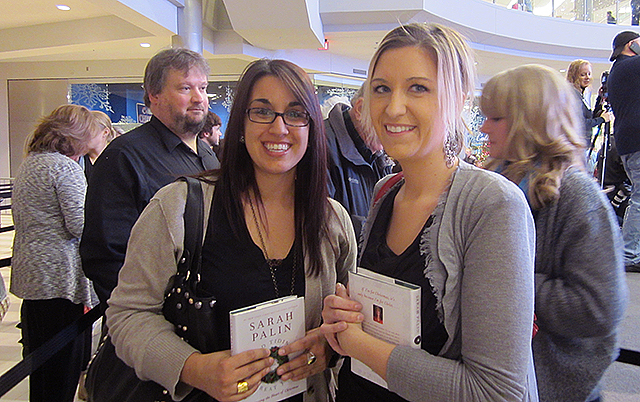 Callie Marohn, Elk River; and Nicole Bastyr, Osceola, Wis. “You see a lot of things like ‘holiday trees’ and ‘holiday cards,’” said Marohn; “and everybody’s afraid to say ‘Christmas.’ But I just say it no matter what: ‘Merry Christmas!’ And people just smile and say it back.” 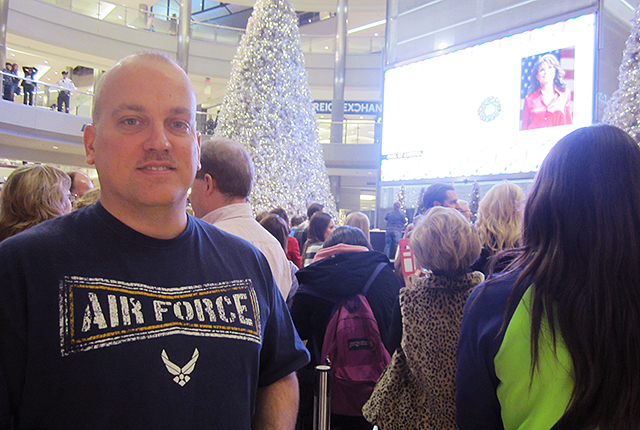 Eric Amidon, Elko. “I think it’s funny that people get offended when you say ‘Merry Christmas,’ because that’s a holiday. I work with people from other countries – India, to be exact – because I’m a computer programmer and I’ve been in the Air Force reserves for 26 years, and they enjoy saying ‘Merry Christmas’ because it makes them sound inherently American.” 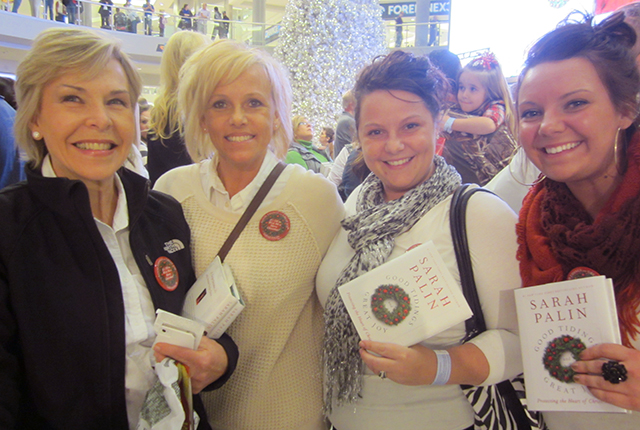 Leko: “It’s good to bring back the simple things, like Christmas, and to not forget about it.”

Engelmeyer: “She shows you what being a normal family, a traditional family, should be and she keeps tradition in life. We should be able to talk about Christ in politics, because it’s how everybody was raised.”

Stang: “She’s bringing back the values that we all have in our hearts. It’s our right as Americans to believe in Christmas and the meaning behind Christmas.”

Johnson: “Our country was founded on Christian values and Sarah Palin is trying to make sure we stay that way as a country.” 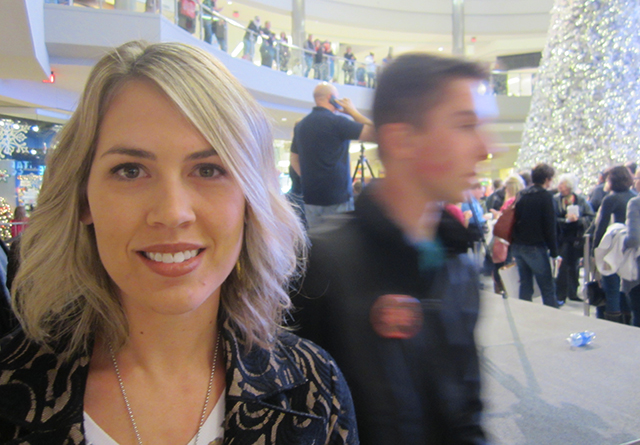 Jamie Trenbeath, Hoople, N.D. “I drove six hours to see Sarah Palin. She’s a very inspirational woman to me and her beliefs are much like what I believe, like Christmas is about Jesus and Jesus’s birth, and he came to save us from our sins. I wouldn’t be offended if someone said ‘Happy Hannukah’ to me. I’d just say, ‘Merry Christmas’ and go on.” 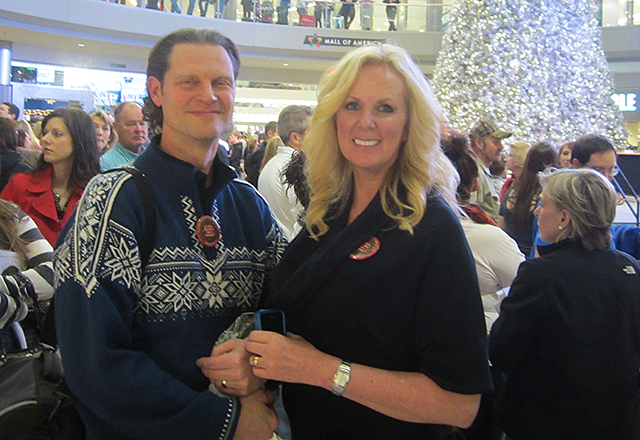 Nate and Trish Freeman, Northfield. “We both believe that Jesus Christ came to save us all, and that is the true meaning about what Christmas is,” said Trish. “So the fact that she’s celebrating this and making it so vocal in her book makes us feel really excited and happy with all of it.”