Within a month of the release of the Coen Brothers’ “Inside Llewyn Davis,” Bruce Springsteen and Billy Bragg said they recognized something of their early selves, something desperate, in the story of a 1960s singer/songwriter getting nowhere playing the coffee shops and clubs of Greenwich Village.

“I was that guy,” both basically said, in separate interviews, and they weren’t alone.

Sound familiar? If they were being honest with themselves, artists, outsiders, and creative types of all stripes ached — not laughed — along with this deadpan telling of a so-called loser’s tale, an anti-parable of going for the brass ring that has much to say to us in these times of choreographed and commercial music victories. And, much like Bob Dylan’s recent car commercial, it goes a long way towards deflating the puritanical geniuses-on-every-corner myth of the ’60s.

The fact is, there were — and are — more Llewyn Davises than Bob Dylans, but the Coens’ everyman story got a big “meh” from the general public, and I know of few songwriters who appreciated, much less saw, the film.

Fittingly, “Inside Lleywn Davis” was so bleak, dull and dark that it and its excellent soundtrack received not a single major Oscar nomination (it’s up for two minor awards, for best sound mixing and best cinematography), despite the Coen Brothers creating a character that will live in infamy, long after Sunday’s Academy Award winners shuffle off to the dustbin of entertainment history.

“I’m having my Llewyn Davis moment,” I’ve heard more than one songwriter say, on or off stage, since the film was released last fall, which, of course, is its great achievement. Movies are supposed to give us something to chew on, and characters we remember at film’s end. And for anyone who has ever picked up a guitar and penned a song that fell on deaf ears, Llewyn Davis is now literary shorthand for failure, joining a select club of great Americans like Willy Loman, Bill Buckner and Walter Mitty.

But Davis is in a loser league all his own. In all of the arts, there may be no more naked, more vulnerable or more lampoonable a figure than a lone singer/songwriter with a guitar. (Cue “Animal House” and “A Mighty Wind” clips here,  and here.) 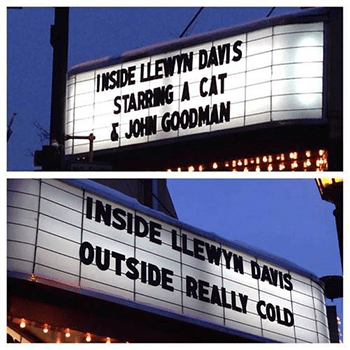 It takes chutzpah to offer your song to the world, which is always at the quick and ready for someone new to crucify, make fun of, make disposable.

Llewyn Davis, then, died for our singer/songwriter sins, because no matter how empty the tip jar at the end of the night, no matter how few downloads of your music or complete lack of radio airplay, no one has ever been ignored like Llewyn Davis has been ignored. He is every performer’s worst nightmare: Despite opening his heart and honing his craft, he is forgettable, inconsequential and historically irrelevant.

“I knew I was a world-beater right out of the gate,” Bob Mould once told me, at the height of Husker Du’s reign, and good ol’ laughable Llewyn Davis hasn’t got an iota of that in his creative make-up. He’s something of a folk-music George Bailey without the happy ending (not for nothing does the Dave Van Ronk-inspired character who kicks Llewyn’s ass at the beginning and end of the film resemble the vengeful schoolteacher’s husband, Mr. Welch, from “It’s a Wonderful Life”), and categorically, every time he sings, his life makes sense: All the rushing around, narcissism, mini-dramas, and bad choices take a back seat, and when he opens his voice and picks his guitar, a song comes out that’s informed by the very nothingness of his life.

That’s art. Hollywood didn’t like “Inside Llewyn Davis” because it didn’t have much of a story, and because it dared to include no epiphany moment wherein all of Davis’ trials and tribulations lead to some life-affirming moment or song – the kind that happens organically at live music shows all the time and are force-fed to us by the likes of “American Idol” and “The Voice.” 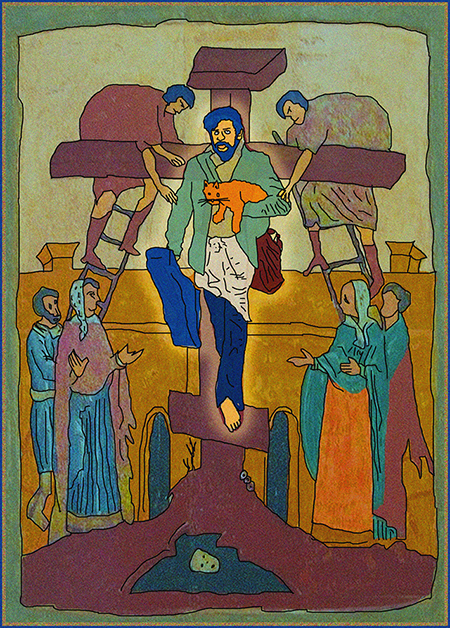 “Llewyn Davis died for our singer/songwriter sins” by Joe Fahey

By design, though, the film has no manipulated emotional arc, and never once does it oversell or overstate the magic of music or songs. Brilliant.

It’s the death of a dream, in all its drab glory, and we keep waiting for Llewyn’s big break or big screen moment when he finally gets happy, or successful, but it never comes. He’s an anti-hero who never really does anything worth talking, let alone making a movie, about, and at the end of the film when he looks at the camera and says, “Au revoir,” he’s saying goodbye to a world that doesn’t appreciate him, and getting on with his life.

Me, I’m still rooting for him and hoping, Oscars be damned, that we haven’t heard the last of Llewyn Davis …

Best Picture of a loser: ‘Inside Llewyn Davis’