Joan Mondale’s lengthy and humbling obituary includes 31 mentions of the word “art” and variations: arts, artists, artisans. It begins by describing her as “Potter, advocate for the arts, Second Lady of the United States, and the beloved heart of her family,” in that order. This is the obituary that was written by her family and published in Wednesday’s Star Tribune. They knew her better than anyone, and how serious she was about the arts.

Others who knew her — artists and arts administrators from here and around the country — also spoke this week of Mondale’s passion and advocacy for the arts. “To her, we were all involved in an important, noble task,” one said.

Jill Hinckley, a potter in Washington, D.C., met Joan Mondale when her husband, Walter, was a U.S. senator. Two of the Mondale children, Eleanor and William, took pottery lessons from Hinckley. “At that point,” Hinckley says, “Mrs. Mondale had not done pottery herself, but you could tell she was dying to do it, to get her hands in the mud. We had a place in the middle of Georgetown on the second floor of a three-story building, with a pottery studio in the back. The neighborhood was very grand, with a lot of restaurants, but the back alleys were pretty grim. Trash and rats.

“When Mrs. Mondale picked up her children, she would park in the back, climb up the rickety stairs, and come straight into the studio. It was not a place where you’d normally see a senator’s wife in her good clothes, but she wanted to see all the kids’ work. She would clap and say how wonderful things were. She was enraptured. I’ve seen a lot of parents in my time, but nobody was as enthusiastic as she was. Eventually she started taking pottery herself. I think the children inspired her.”

Sam Grabarski, former president and CEO of the Minneapolis Downtown Council and executive director of the Minnesota State Arts Board, first encountered Joan Mondale when he was head of the Iowa Arts Council. By then, Walter Mondale was vice president and Joan was known as “Joan of Art.” As honorary chair of the Federal Council on Arts and Humanities, she was traveling throughout the United States, visiting state arts boards and councils to encourage support for the National Endowment for the Arts.

“When she came to Iowa, we had a big reception for her,” Grabarski recalls. “Her style at that time, when she was our most nationally recognized arts supporter and the vice president’s wife, was the same then as it was later in her civilian life. She was loquacious in the best sense. She never put on any artificial dignity or aura of importance. To her, we were all involved in an important, noble task.”

They met again in 1985, when Ronald Reagan was in the White House and the Mondales had returned to Minnesota. Grabarski was at the Walker Art Center gift shop, looking for a gift for his wife, trying to decide between a brooch and the matching earrings. “Joan was there, too, by coincidence, so I asked her which to buy. She paused and said, ‘Silly man, buy them both.’ ”

Not longer after, Grabarski was trying to convince the American Craft Council to move one of its prestigious ACC craft fairs from Dallas, where it was failing, to the Twin Cities. “At that point, we weren’t a state that had a great reputation as a crafts community,” he says. “I asked Joan to co-host a luncheon for the ACC brass to which we invited most of the prominent crafts leaders we could think of. She was the draw, and they were impressed. The ACC fair moved here in 1986 and has been here ever since. She was instrumental in bringing it here. She knew the enrichment that crafts bring to our everyday lives, and she was an excellent spokesperson for the importance of craft.” And in 2010, after 67 years in New York City, the ACC moved its headquarters and library to Minneapolis.

Joan Mondale also played key roles in establishing the Northern Clay Center in 1990 and the Textile Center in 1994, both national centers of craft and both in the Twin Cities. Peter Leach, an internationally known potter and one of Northern Clay’s founding artists, remembers the early days:

When we first approached Joan, she was already familiar with similar institutions from the time she spent in Washington. She knew about Baltimore Clay Works and Philadelphia Clay Studios, either of which could have been a perfect model for Northern Clay Center. Combine that with her personal involvement with clay [by then, she had studied with a master potter] and it didn’t take too much convincing to get her on board.

I think the Clay Center would have happened without her, but did it happen more easily and readily with her? It certainly did. She had the contacts, she was well-known, and she opened doors to foundations and donors. It didn’t take long to line up visits with various foundations – Dayton-Hudson, the St. Paul Foundation, Honeywell. This was the value of having Joan associated with the Clay Center. In pretty short order, we got to talk to a lot of people pretty quickly, all of whom responded positively. She had a very quiet but irresistible way, and a pleasant smile. She never raised her voice, but she could be very convincing.

And, as Leach tells it, she was totally flummoxed by St. Paul.

“You’d think that someone who was a world traveler, who was associated with politics at the highest level, who was about as sophisticated and savvy a person as you can imagine would figure out St. Paul,” says Leach, a St. Paul resident. “But whenever we scheduled a meeting in downtown St. Paul, she would lose it. ‘I don’t know which way the one-way streets run! I don’t understand the numbering system! The traffic and the parking are too confusing!’ It tickled me that this was a place where Joan couldn’t find her way.”

‘She had an interest in all the arts’

A few years later, when a group of fiber artists decided to form the Textile Center, they looked to Northern Clay and its champion, Joan Mondale. “Although she was a potter, she had an interest in all the arts,” says Textile Center founder Margaret Miller. It probably helped that Joan Mondale had studied extensively with the great Stillwater potter Warren MacKenzie, whose wife, Nancy MacKenzie, is a prominent fiber artist. 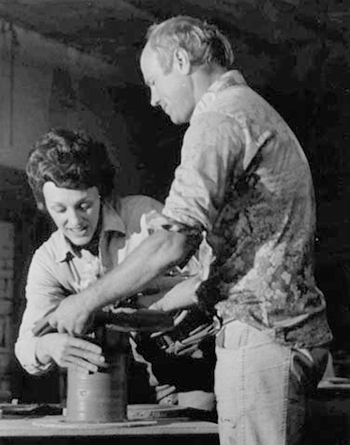 Courtesy of the Minnesota Historical SocietyJoan Mondale, shown in 1978, throwing a pot on a potter’s
wheel at the Clayworks Studio Workshop in New York as James
Rosenquist assists.

“She lent her name to our cause,” Miller says. “And she did it early on, when we were trying to raise $2 million to purchase and renovate a building. We were a brand-new organization, and her name was really important. Even in her later years, when coming out to benefits took great effort, she always came. She was our celebrity, our rock star. We were so very, very lucky to have her.”

In 2004, the Textile Center dedicated its largest exhibition space to Joan Mondale. Her daughter, Eleanor, was the emcee at the celebration. “Eleanor decided she wanted to do something really funny,” Miller recalls. “Before the event, she walked around backstage and asked, ‘What have you got that I could wear?’ One of the artists had made an outfit out of feathers, a sort of bikini. Eleanor put the feather bra on under her shirt. When she came out on stage, she said to the audience, ‘The art here is really something. You can’t take your eyes off it. Let me show you some amazing art.’ Then she unbuttoned her shirt. Joan was sitting next to me and said, ‘What am I to do with her? Ah, there’s nothing I can do.’ She very much enjoyed her daughter’s sense of humor.”

During the years Walter Mondale served as U.S. ambassador to Japan (1993-96), Joan Mondale often presented her own handmade pots to Japanese dignitaries. By then, she had spent enough time with the Textile Center experts to develop an eye for fiber.

“She got very interested in Japanese textiles when she was there, and she came back with a wonderful collection,” Miller says.

“I was an appreciator,” Joan Mondale once told the Washington Post. “I was a consumer. I’m not a critic. I’m not an art historian. But what I could do was sort of say thank you to the arts community.”

Although her impact was national, even international – the Japanese loved Joan Mondale – we Minnesotans benefited most from her passion, her dedication and her advocacy. She made us all more beautiful. In Sam Grabarski’s words, “When I heard that Joan Mondale had died, I thought that the nation, and Minnesota in particular, had truly lost one of our more effective and visible arts supporters. There may never again be a person such as Joan of Art.”

A memorial service will be held at 12:30 p.m. Saturday (Feb. 8) at Westminster Presbyterian Church. It will be live-streamed.