Like a lot of Minnesotans this year, I opted for a winter vacation, but this one taught an unexpected lesson: You don’t need sand, sun and surf for a good one. Deep mud and torrential rain will work just as well, if you’ve got a compelling destination and a small group of like-minded companions to share it with.

I had all those things in spades on a trip to Central America in January. Especially the rain and mud.

I had gone to north-central Guatemala, a region known as the Peten, to spend a couple of weeks tromping around Mayan ruins with a dozen other archaeology buffs from the Maya Society of Minnesota.

Some were working archaeologists, others had been Peace Corps volunteers there, all were experienced and enthusiastic travelers – a good thing, because it wasn’t a cream-puff trip, and many of us were pushing the outer edge of middle age.

Two thousand miles south of Minnesota, the weather systems that made our winter so extreme were also punishing Guatemala. The rainy season should have ended a month before we arrived but was still in full, wet swing. And as warm as the semi-tropical air seemed to us, temperatures were so unseasonably low that local people shivered in sweaters, and Guatemala City newspapers reported on how freaky this weather was.

Luckily, we had an irrepressibly buoyant leader: Brent Woodfill, a young Minnesota-grown archaeologist who directs a project at Salinas de los Nueve Cerros, an ancient manufacturing center where the Maya once produced salt for trade throughout the region.

Woodfill met the group in Guatemala City and for the next two weeks ran cultural interference, doing everything from stoically lecturing in a downpour at the ruined city of Tikal to shopping for group snacks at a crowded Walmart, while boosting spirits and bandaging skinned shins in between. When in need, everyone agreed, “knock on Woodfill.’’

He had a different sense of time and distance than we did.

“Only a couple of kilometers,’’ Woodfill would promise, or “only about 15 more minutes…’’  We learned to double those estimates. If we were on foot, or it was raining, which was often, we tripled them.

Because Woodfill is also a cave specialist, he led us first into the Candelaria Caves – a water-worn system that runs through limestone bedrock for 86 kilometers near the modern town of Coban. The caves’ low and narrow spaces alternated with high open rooms, all of them pitch black except for the lamps we wore on our hardhats, a few flashlights and the candles our local guides brought for a prayer   deep inside the cavern.

Traditionally, caves have been sacred to the Maya, but I’m not fond of them, unless our National Park Service has endowed them with nice guard ropes and discreet lighting. This made Candelaria a challenge. It got worse when we took a different route out and ended up scrambling over rockfalls, each steeper than the last. It took hours. 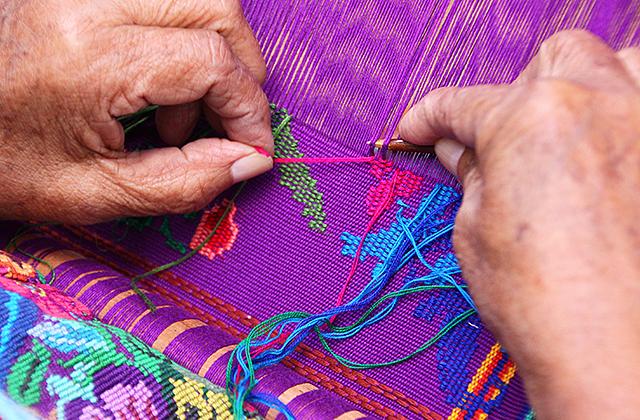 MinnPost photo by Catherine Watson
A craftswoman embroidering a shawl outside the ruins of Quirigua, Guatemala.

For someone who travels alone – and until now preferred it – Candelaria was another lesson, this one in humility, not only because I had to accept help, but because I had to admit I really needed it. Even after a career of travel, I wasn’t strong enough to get through the roughest parts on my own.

Thankfully, wherever the trails were slippery or non-existent, the group’s strongest hikers – Woodfill among them — instinctively stationed themselves along the route. Just when someone would start to slip, there’d be a strong arm or a willing hand to grab hold of. Without that comradeship, I wouldn’t have attempted half the things we did together. The hardships, everyone agreed later, were what bonded us.

Our itinerary had been set nearly a year in advance, but in the wet reality of rural Guatemala, it changed almost daily, depending on road conditions. The sites of Waka and Uaxactun had to be dropped entirely, and we would have missed the riverside ruins of Cancuen if we’d been less persistent.

On the way there, our small bus got a flat tire in a muddy ravine, and our driver could not risk going farther. Rather than give up, the group talked a nearby farmer into giving us a ride in the back of his open truck. When that vehicle got stuck up to its axles in the next muddy ravine, behind three other stuck trucks, we just got out and walked.

Trudged was more accurate — for about a mile through ankle-deep mud to reach the bank of the Rio Pasion, to catch an open launch, to take us across to Cancuen’s moss-shrouded remains. And then we retraced our steps. All of them. It took me an hour of scrubbing that night to get the clotted mud off my boots. I gave up on my socks.

Cancuen, for me, was where every bump on the jungle floor started to look like an unexcavated ruin. Frequently that’s what they were, but as one of the group’s professionals assured me, “sometimes a mound is just a mound.’’ I never completely accepted that, partly because I liked imagining the opposite and partly because there’s still so much to be discovered in the Maya world.

Compared with archaeology in the Mediterranean, Maya archaeology is relatively new. Woodfill’s own project area, for example, encompasses 15,000 square kilometers, and most of it has never been investigated by archaeologists. 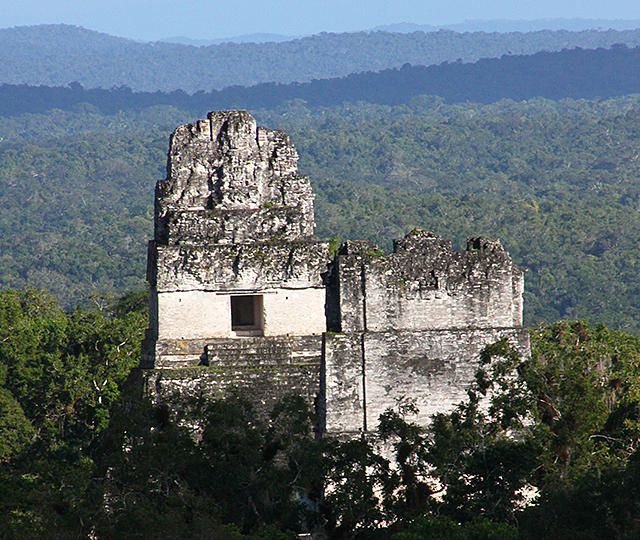 MinnPost photo by Catherine Watson
The tops of Temple 2, left, and Temple 1 in the ruins of Tikal, Guatemala.

Maya civilization as a whole goes back some 3,000 years, but was at its most spectacular between about 400 B.C. and 900 A.D. It changed and faded in the centuries that followed, but even then, the people didn’t disappear.

What disappeared – “collapsed” is a better term, and it was gradual — was the elaborate political system that built and sustained the ancient cities. Ordinary Maya then did what human beings always do in times of great stress: They moved away. What they left behind is some of the most startlingly beautiful architecture in the world.

As many as seven million Maya still live in parts of Guatemala, Belize, Honduras, El Salvador and Mexico, still speaking a variety of Maya languages, still retaining their identity and traditions and – for many – their beliefs.

Through Woodfill, we had met two spiritual leaders, Tomas Cruz and Ramiro Tox, who live near his research site, and they invited us to participate in a traditional ceremony. For their culture, Tox explained the night before, “ceremonies are like the beams that hold up a building.’’

The men held the ceremony outdoors, in a clearing hacked with machetes from a cornfield, on a rare sunny day.

Cruz assembled a wreath-like altar on the ground, while Tox and Woodfill handed him various ingredients, and we gathered around them. Several local people, including a young girl and a couple of little boys, also stood shyly by, quietly watching and listening.

First, Cruz poured white sugar in a large circle and marked a sugar cross inside. Where the bands of sugar met, he set fist-sized balls of copal, a pine resin that the Maya have used as incense for a thousand years.

On top, he arranged small bright-colored candles: white and yellow, black and red, the colors of the four directions, followed by a rainbow of other hues. He placed small sticks around all this, like a barricade. Then he sprinkled the whole array with white rum, oil and perfume, and set it alight.

All the while, Cruz said soft prayers in the local Maya tongue, but he explained them in Spanish, and we murmured translations to each other as the scented smoke rose around us.

The colors of the candles all had spiritual meaning, and Cruz suggested we choose one representing something we wanted to let go of, and then cast it into the flames. I chose a purple candle because it was connected to jealousy, and I thought letting go of that would stop me from envying people like Woodfill, who have full-time archaeology careers.

(Woodfill, by the way, had been at pains to make sure we understood that archeological field work wasn’t fun: There was no glamour, he stressed, no treasure and plenty of hazards, ranging from icky skin parasites to narco-traffickers. Even so, it sounded thrilling.)

By the end of the ceremony, I had also burned up two white, one yellow, a pink and a sky-blue candle, for different kinds of healing for myself and people dear to me.

Then we all stood together in the cornfield while the flames burned down to ashes, which gave a long time for thought. What struck me, over and over, was the profound value that the Maya placed on the natural world and on the importance of protecting it. Their culture respected the earth more than my own does, and I marveled at the persistence of such faith across time.

Now that it’s spring, when winter vacations usually fade with the snow, this one is still with me. The ancient Maya remain one of my life-long interests, but it’s the memories of living people that kept me warm through the rest of this long winter — the people I traveled with, and the people we met.  Would I do the trip again? In a heartbeat, mud and all.

(The Maya Society of Minnesota is a 35-year-old organization that sponsors lectures and workshops on Maya culture, both ancient and contemporary. Its next event is a free lecture, “Agriculture, Forest Management and the Demise of the Classic Maya City of Tikal,’’ at 7:30 p.m. Friday, April 11, at the newly remodeled Northrop Auditorium. For details, go here or here)

Meeting the Maya in midwinter