The documentary “Finding Vivian Maier” – now showing at the Edina Cinema and available on On Demand – is a must-see for anyone with an appetite for art, history and mystery, and whose subject brings to mind such famous creative recluses as Emily Dickinson and J.D. Salinger, not to mention the concept of the artist as a necessarily solitary creature as celebrated in Daniel Johnston’s “Story of an Artist.”

It’s also the story of the dogged passion and detective work of one John Maloof, the Chicago historian and gumshoe journalist who co-directed “Finding” with Charlie Siskel. Maloof discovered Maier’s work and has spent the last few years of his life almost single-handedly making sure it’s not forgotten. “Finding Vivian Maier,” then, is the ultimate fan-boy doc. Or is it?

“This film wasn’t about proving Vivian’s worth to the world by saying, ‘Hey everybody, look! The artist tastes good, please believe us,’ ” said Maloof by phone from his home in Chicago. “It’s not about that. It’s a good story, and the story is about a nanny who took 100,000 photos and never showed them to anybody, and she’s a really interesting, fascinating character.”

“It’s a strange thing to know someone without ever meeting them – so well, and more than probably anybody,” he said. “I have all of her stuff, I was able to talk to more people that knew her than anybody, and that’s what this film was about. The discovery of her work was not the most probable thing to happen because I’m the most unlikely person to find it and the most unlikely person to realize what it was [worth] because I wasn’t a photographer. Other people who did have it were more likely to realize what they had than me, but I was buying their boxes from them.”

In 2007, Maloof was working on a Chicago history book when he came upon a box of Maier’s photos and negatives. He purchased it for a few hundred bucks from an estate-sale auction house that had acquired the photographs from a storage locker that had been sold off after Maier was no longer able to pay her fees. None of the photos made the book, but Maloof was floored by the quality and breadth of the work. When he Googled “Vivian Maier,” not a single result came up, so he created a blog and posted several of the photos to positive reviews but no information about the photographer. 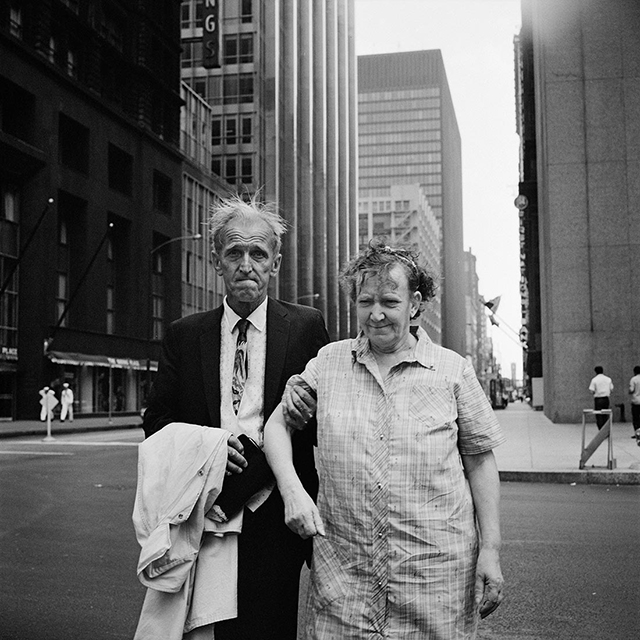 He put the box in a closet and forgot about the photos until he Googled Maier again in 2009, only to find a weeks-old Chicago Tribune obituary of the woman who would become the focal point of his life for the next few years. He then started acquiring as much of the rest of her work as he could, and began cobbling together her biography in earnest.

“It was a lot of work, this detective work,” he said. “I’m compulsive – or I should say ‘obsessive’ – so I’d track down these leads and sometimes they’d pay off and sometimes they wouldn’t. I found 90 people who knew her.”

What he discovered was a portrait of the artist as a loner, and a mean-to-borderline abusive nanny who took live-in jobs with wealthy Chicago area families to support her work as a talented fine-arts photographer and visionary closet photojournalist. Born in 1926 in New York, she was a product of her times and something of a pioneer to the digital photo multitudes of today, capturing for the sheer love of it the life, people, architecture and street scenes of Chicago in the ‘40s, ‘50s, ‘60s, and ‘70s. But for as much as she connected with the world via her camera, Maier remained alone and mostly unloved.

“If she wasn’t a fascinating character, I wouldn’t have gone to such lengths to find out what was up with her,” said Maloof. “Why didn’t she show the work, why was she a nanny, why did she take all these photos, all these questions we had. And to see the things she was photographing, and the humor, and the empathy for people, you get the feeling that this woman … I mean, she was like a punk rock nanny in a way.

“One of the things I really loved about her was that she grew up rough. She was poor, and so she never knew that [affluent] side, but she was living in the wealthy suburbs of Chicago and she was taking these children to go see culture, because she knew these kids were never going to see where their food came from. She took them to the stockyards of Chicago: ‘This is the food you’re eating.’ She’d take them on the L [train], here and there, and I thought that was so cool.”

By accident or by design, Maier’s canon was created away from the glare of the outside world. She was either too sensitive to criticism or indifferent to outside influence, or it may never have occurred to her to share her work. From what we know, she was an observer who sublimated her own ego and life for her work, and who lurked in the shadows to avoid distraction and enhance her concentration. The result is a single-mindedness and vision born of a long-gone era.

“That’s one of the things that really compels me to know more and also to have so much respect for her, because she did this for herself,” said Maloof. “She’s a true artist. She wasn’t doing this to submit to LIFE magazine or to show off to other photographers or galleries that she’s better than someone else, or just as good as someone else. She didn’t do that. She didn’t need that. She knew that her photos were good, and she kept going, and it’s all that she knew and that’s all that she did and it’s all she needed.

“Most people I think really want to be that person that doesn’t need somebody to validate them. If you look at Twitter or Facebook, all it is is people showing off what they’re doing, or trying to get somebody to favorite or tout or get somebody to pay attention to them. She didn’t need any of that to be happy, and I think a lot of people really wish they could be like that and still be happy — but it’s not the case, especially in this social media era.”

Maloof isn’t the only Maier preservationist. After his discovery, Chicago artist, cabinet maker, and collector Jeff Goldstein bought a box of 12,000 prints and has curated exhibitions in galleries all over the world, including a recently-made-permanent showing at the Minneapolis Photo Center.

Which is fine by Maloof, who regularly collaborates with Goldstein and said his main mission is to ensure that Maier’s work is discovered by as many people as possible.

“I’ve turned down a lot of press because enough, I’ve had enough,” he said. “I don’t want to annoy people by doing this or that. Her story and her work has a life of its own and I had nothing to do with that. And if you look online you’ll see that all these publications are just publishing the hell out of her photos and what’s important is what went viral first. We didn’t know anything about her. It was the photos. It was only the photos. There was no backstory. So that says a lot about the actual work, standing alone.”

Of all the arts, photography has arguably been impacted most by digital technology. Film, dark rooms, negatives, and even prints have been rendered archaic, now the sole domain of serious artists. In these days when anyone can make genuinely stunning digital photographs, it’s safe to say we’ll never see another Vivian Maier, who meandered, wandered, and whiled away her days on the streets of Chicago and beyond.

“Things were a lot slower then,” said Maloof. “People didn’t have phones on them, constantly checking in on what their hundreds and thousands of friends were doing. It was a world when you could live in your own bubble, and that was perfectly OK because everyone was disconnected.

“As a photographer, I’m fairly in tune with the community as it is, and people always complain about digital photography and phones and that there’s so much noise: ‘How am I going to get my work to be seen? How am I going to be able to separate my work from all this noise?’ People are posting photos of all their cats and dogs and everything, and I would say that those photos of your cats and dogs aren’t taken to show in a gallery, they aren’t taken to say ‘This is my art.’ They’re taken to describe something.

“There’s a big separation there. All those photos are not meant to be shown in a gallery. Vivian’s photos were shot with her Rolleiflex [camera], medium format film, black and white, and they have a very romantic thing about them. She captured depth of field and detail. And also the fact that it was shot on film, and shot by a person who carefully composed it for her art – that’s a big difference from opening your phone and hitting off five shots of your new car.” 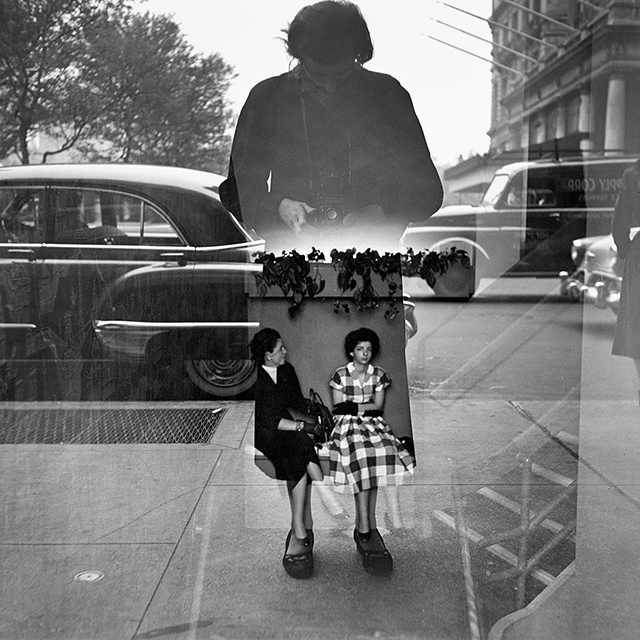 Courtesy of the Maloof Collection
Self portrait, 1954

At its heart, “Finding Vivian Maier” is a moving and inspirational film – to no one more so than Maloof himself. He’s taken up photography in order to get closer to Maier, and their bond as depicted in “Finding Vivian Maier” is matter-of-factly mystical. Every late, great unknown artist should have a champion like Maloof (it says here that Vivian Maier is dancing in her grave – because her work is known worldwide and she never had to attend one of her own openings), and the film is a lesson in the values of passion and curiosity. “When we are moved by art we are grateful that the artist lived, grateful that he labored in the service of his gifts,” wrote Lewis Hyde in his important 1983 book “The Gift: Creativity and The Artist in the Modern World,” and to that end Maloof has done the world a great service.

“This is something we didn’t really touch on in the film, because there’s only so much you can put in there,” he said. “When I bought the box, it was for a book, which is known, but nobody knows that I wasn’t a photographer at the time. I didn’t know anything about photography, really. Seriously, I didn’t know anything about what good work was. So when I started to scan the work in after I finished the book, I was interested in the things that people clearly don’t see that strongly about in her work, like the Chicago cityscapes and skyscrapers and architecture.

“So I would take my camera, my little point and shoot, and take photos of the same things. So her inspiring me to go take photos, even in that little clumsy way, I got hooked on photography. I started to read books and took a class on how to develop and print negatives, I bought a film camera, and I was scanning her work and hitting the streets taking photos, and I learned that her work was way better than I originally thought. So in doing that, I am now a photographer. And I realized, in doing that, she taught me photography, and so I have a very emotional connection to the work because of that.”

To be sure, Maloof has an emotional connection to Maier, and “Finding Vivian Maier” is his homage.

“It’s nice that it’s finished and in theaters and getting really good reviews, so we’re happy,” he said. “Anderson Cooper tweeted about it, so that was pretty sweet.”