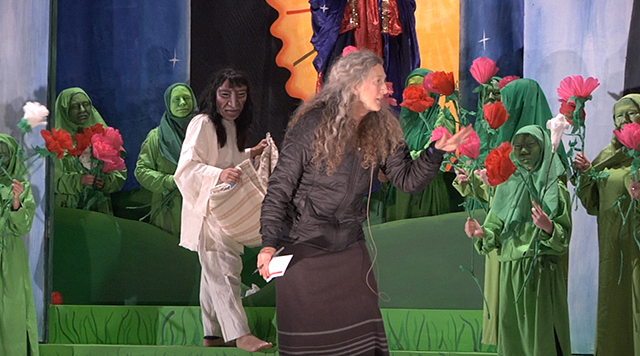 Photo by Daniel Polsfuss
A scene from Heart of the Beast Theater’s performance of “La Guadalupana” at the Basilica of Saint Mary in December, 2013.

The McKnight Distinguished Artist Award, the $50,000, no-strings cash award given each year by the McKnight Foundation, is the Minnesota equivalent of the Kennedy Center Honors. It “recognizes individual Minnesota artists who have made significant contributions to the quality of the state’s cultural life.” This year’s winner is Sandy Spieler, a name that may or may not ring a bell.

Unlike previous McKnight honorees, Spieler doesn’t dance, act, write books or music, throw pots, or conduct orchestras. Since 1976, she has served as artistic director of In the Heart of the Beast Puppet and Mask Theatre, a community theater based in a former pornographic movie house on East Lake Street. Once a year, she “midwifes” the May Day Parade and celebration — an epic, boisterous rainbow of a party that draws some 50,000 people down Bloomington Avenue into Powderhorn Park. She gives workshops on puppetry, and she’s passionate about water, which she believes belongs to everyone. She cares deeply about things that can seem out of step in today’s world: individual rights and responsibilities, the power of the people, the value of community, milkweed growing in her yard.

When MinnPost spoke with Spieler, she called the award “a complete shock” and confessed to briefly visiting her Facebook page. While reading messages from friends near and far, she said, “my heart just kept opening and opening.” 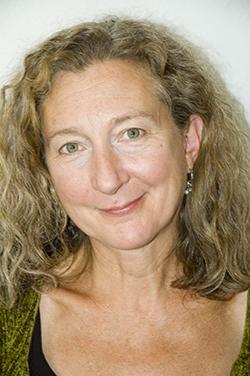 Sandy Spieler: Why not? The sculpture calls to me, and the painting, and the graphic work, and it brings so many things together — movement and ritual. Puppets have no life of their own, and yet, when you pick them up, a breath comes into them. And then, when you lay them down, the breath goes out. It’s the ritual of life: We’re brought to our birth, then we move in our life, then we lie down to the earth again. There’s something deep inside me that completely is in tune with these endless cycles of life and death.

Another thing about puppets is you build a dialogue that is relational. It’s not necessarily about words, but movement. You can represent an emotion, or an ancient world or a butterfly, or a tiny ant or the sun, and suddenly you have a conversation that is not just about human life, but human life in relation to anything.

Ultimately, I feel like all of my work is about recognizing and honoring that interconnection of all things. Puppets are just a good way to bring that forward.

MP: What originally brought you to the Powderhorn neighborhood?

SS: I was a student at Beloit College, and during your fourth term everybody had to go somewhere and have an experience. This was in the ’70s, when colleges were experimenting with ways of grounding the academic experience in the “real world.” I chose to come here to Minneapolis because I wanted to go somewhere [where] ethical decision-making was happening. There was a minister here named Joe Bash who was doing strong anti-war, anti-racism kinds of work. It spoke relevance into an institutional form that I thought was very powerful.

So I came here to Minneapolis, and I worked in the youth department at what was then called the American Lutheran Church. They housed me in a place in Phillips neighborhood called the Almond Tree Household. It was the convent of Holy Rosary Church, right by Little Earth of United Tribes. So instantly I was planted into this place where the May Day Parade starts from every year, in a household of people who had gathered to be witness and helper and part of a neighborhood.

There I was, maybe 20 or 21, in the gym at Little Earth of the United Tribes, hearing speeches by leaders of the American Indian Movement (AIM) which was forming and gaining power. It was a melding of place and a spiritual tradition with a social perspective and a political perspective, speaking about justice for all peoples and what it means to be in relation to the earth in every step you take. I was already primed for that, from how I was raised in my own family, but it was an articulation of something that spoke to me and has lived in me. I feel endlessly grateful to be able to share this place in this neighborhood with such deep-thinking vision.

MP: Your first May Day Parade was in 1975. What was your impetus for starting that?

SS: The Vietnam War was still on, and we had taken some puppets outside in the street earlier in the winter, and we said, “This is great; let’s do something else outdoors.” The earliest we could do something was May Day, which is a holiday that incorporates both the people’s energy — the worker blood energy — and also the [coming of] spring. The red root and the green root of May Day ply together. We wanted to do something like a protest of the war, but from another point of view — not “let’s stop the war” but “let’s knit our community together,” after the fracturing that had happened from the protesting. Let’s come out of our houses, see each other’s faces, embrace, say hello, gather together, dance, play music.

MP: Would you say it exceeded your expectations?

SS: There were no expectations. We did it again the next year, and again the next year, and by the third year it felt like this is a good thing. But we didn’t imagine we would be building a festival that would draw 50,000 people and thousands of participants, and that it would mean so much to so many people’s lives, and that it would become intergenerational.

MP: In 1988, Heart of the Beast moved into the Avalon, a former X-rated movie theater on East Lake Street. What were some of the challenges you faced?

SS: The first challenge was the building, and that remains a challenge because it was built as a movie theater, not as a neighborhood center. The initial renovation was incredibly basic — cleaning it up, taking the chairs out, bringing it up to code. Even then, it was almost like squatting. We’ve done very few capital improvements on the building since that time. The building is at a point right now where it needs some major tender loving care.

MP: Did you still have people showing up and hoping to catch a movie?

SS: Absolutely we did. In the years after we had moved in, sometimes we would have people come to the door — men — and they would come into the lobby, and they would have the most quizzical look on their face, like ohhhhhh, and usually they wouldn’t say anything, and they would just leave. That happened a number of times.

MP: Tell us a story from the early days.

[Note: Once a Lake Street landmark, Gustavus II Adolphus Hall was gutted by fire in 2004 and demolished in 2008.]

MP: We live today in what often seems like a cynical, polarized and selfish world. Much of what you do with Heart of the Beast and May Day, with puppets and progressive causes, can seem like wishful thinking. How do you keep the faith?

SS: I don’t always have the faith. I have moments where I feel really lost and sad. But we got ourselves into the place where we are — by how we spend our money, how we use energy, what kind of work we support or don’t support, our educational systems. These are all things we actually have great power over. If we got the world into this place, we can get the world out if it. That’s the point of May Day, to bring vitality to our sense of responsibility, and deep, great love for this world, and to hold that at the center of whatever activism we take on. 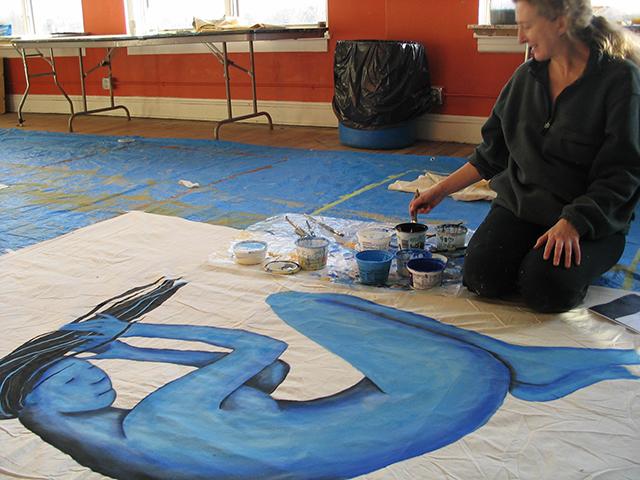 MP: Can you point to something specific that’s come out of May Day that has moved things in a positive direction?

SS: I think certainly the work on water that I’ve been passionate about. I am totally in love with water and all of its mystery, all of its primordialness and its essentialness. Water is one of the greatest teachers of interconnection there is. You start asking simple questions — you need water, who else needs water? And suddenly you have a vision of the whole world. … Our bodies are part of the watershed. Every bit of water that moves through our hands and our streets is part of the watershed. So while it’s easy to point fingers at factories and farmers, let’s look at our own lawns and our own houses.

MP: What’s one thing that each of us can do for water? You’ve worked to promote water fountains over plastic water bottles.

MP: Have you made any plans for your McKnight award?

SS: No. It’s all very new and fresh. But I really don’t have much of a plan in place for retirement. When I can no longer put the papier-mâché onto the molds, what am I going to do? So I think it will be some kind of grounding for that. And then I’ll probably also consider using some of it as seed money toward some of the projects I’ve been wishing for but haven’t been able to garner support. One is a touring show we do called “Are You Thirsty?” Everyone who sees it says it should be shown in every school. It raises some very major questions in a very fun and understandable way, and it’s good for kids and adults.

MP: Is there something coming up at Heart of the Beast that you’d like people to know about?

SS: We have something called the “Puppet Pandemic! Puppet Slam” coming to our theater on June 28. In September, there’s going to be a regional puppet festival. A lot of us puppeteers have joined together for that — Open Eye Theater and the Twin Cities Puppeteers and In the Heart of the Beast. And we probably will be doing a capital campaign for repairs that need to happen in the plant of our building.