In 505 minutes, more than 250 artists will present 125 projects in 38 venues. Fifty thousand people are expected to attend, moving by car, bike, bus, foot and light rail between six zones spread out across the city, from the Walker to the University, West River Parkway to the Greenway.

Now in its fourth year, Northern Spark is a once-a-year opportunity to see the city in a new way, in deepest night and the wee-est hours, long before the birds start to sing.

It’s exciting. It can also be confusing and overwhelming. Where to start? What to do? How to prepare?

We asked an expert. Steve Dietz is Northern Spark’s founder and artistic director, the guy who looked around the Twin Cities and decided Minnesotans could and would stay up all night, if we had someplace to go. 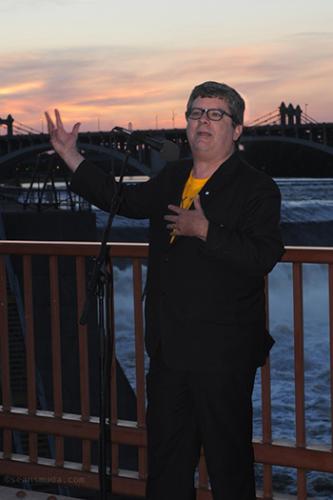 MinnPost: In a nutshell, how should one “do” Northern Spark?

Steve Dietz: Maybe the way to do it is to pick a zone, explore that zone, and then depending on how you’re feeling, go to the next zone. You might end up in one zone or you might make it to all six. There’s no right way of doing it.

[Note: You can see the zones — labeled A through F — on the free Northern Spark mobile app, available for iPhone and Android, and in the “Northern Spark 2014: Guidebook,” available to download here – scroll down to Documents – or pick up at one of the Information Hubs marked on the maps.]

MP: Being Minnesotans, a lot of us are wondering, “How can I make sure to see and do the right things?”

SD: The goal of Northern Spark is to get people to explore the city. It’s an adventure and a journey. People shouldn’t worry about missing this or that thing.

That said, I think the right things depend on who you are. If you’re coming out of the music and performance world, I would look at all the performances and music and map your route that way. If you want to see some of the big projections, I would map those out. Every zone has projects that if you’re there, you shouldn’t miss. But unless you’re really committed, it’s going to be hard to make it to all six zones.

There are 125 different projects. Maybe 20 are timed. We list all the timed events in the front of the guide. For example, if you want to see the Minnesota Orchestra and the projection mapping at Orchestra Hall, then make sure you’re at Orchestra Hall by 10 p.m.

MP: Is this the first time the Minnesota Orchestra has been part of Northern Spark?

SD: Yes, it is. The orchestra will do their regular subscription series concert at 7 that night. At 10, there’s a free, somewhat truncated version of it. Both of them will have this amazing light show.

MP: What’s the best way to get around?

SD: If you can do it, biking is a fantastic way to get around. It’s really fun, and none of the distances between any given zones are that far.

MP: Is there a safe place to put your bike once you arrive somewhere?

SD: The West River Parkway has a bike corral, and each of the venues has some formal bike parking, but with that many bikes there will be some creative lock-up situations. We don’t have 10,000 biking slots.

SD: It wouldn’t surprise me.

MP: What about people who won’t be biking?

SD: This year, we’re doing a few new things. One is a curated champagne bus tour for 55 people. We’re also offering a code for $25 off your first Uber ride. And we have some reduced-rate parking for people who use Parking Panda. You do have to take care of yourself, but we’re trying to help out as much as we can.

[Note: The bus tour has sold out. Uber is a car service; go here to sign up with the Northern Spark promotion code. Reserve parking through Parking Panda here.]

MP: How much cash should you bring?

SD: Honestly, it’s not a cash-hungry kind of event. What I would do is estimate how much you think you want to eat at the food trucks. The expense once you’re there is in buying food and drinks. It’s easy to do the whole night for one person for less than $50.

There are food trucks in all of the zones, and then there’s the 100-Course Dinner on the Northrop Mall. And the Dosha Kitchen. There are other food-oriented projects as well.

MP: What would you say are the absolute must-sees?

SD: One good way to start out is at the Convention Center Plaza, with the Public Acts of Drawing and “Balancing Ground” [winner of this year’s Creative City Challenge] and Eric Avery’s “Minneapolis Cubed.” Great projects. And then there’s a half-dozen other projects that are all fun. So don’t miss those. 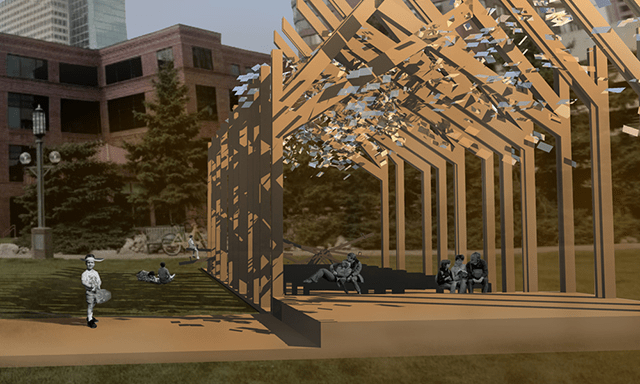 Courtesy of Northern Spark
“Balancing Ground” will be on display at the Convention Center plaza in Minneapolis.

Then walk, bike, or bus down Hennepin Avenue to Fifth and Hennepin and there are three amazing projections, two on the Cowles building [“In the Shadow of Paul Bunyan” and “Projecting Lowertown”] and one on the parking lot wall across from it – a new project by Jefferson Pinder [“Relay”], who created a video with the local Somali-American community.

Just a few blocks from Fifth and Hennepin, take the steps down at the Hennepin Avenue Bridge and you’re on West River Parkway. From there, walk that half-mile and you’ll see tons of projects. Don’t miss Luke Savisky’s projection onto the Gold Medal silos [“E/x MN”]. So there you’ve done three zones in a fairly direct way.

And then I would sort of pick one other zone. Do you want to see the 100-Course Dinner or the Gossip Orchestra or the other projects at the University of Minnesota, or do you want to head over to the Minneapolis Institute of Arts before it closes at 2 a.m. and see Abinadi Meza’s sound piece [“The Sky Opens Twice”] and all the great MCAD projects, or do you want to go over to the Walker? Christian Marclay’s “The Clock” is an amazing film. 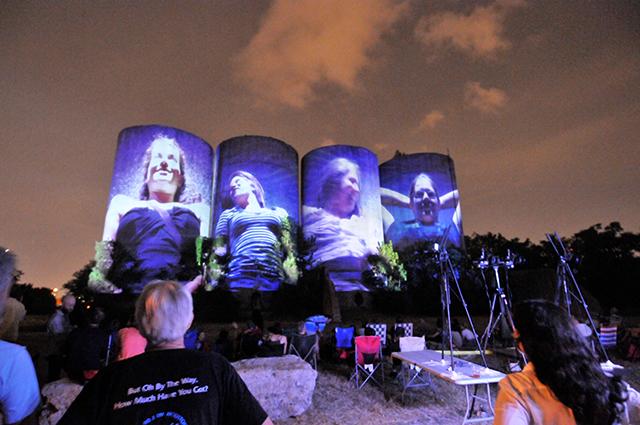 MP: “The Clock” sounds fascinating. A 24-hour montage of film clips that show the passage of time, in real time.

SD: It’s a really fun thing, and there are very few copies of this film in the world, so it’s a very special opportunity. There will be more opportunities at the Walker to see it, but this is the first, and it will run 24 hours – from 9:01 p.m. on Saturday to 9 p.m. on Sunday.

And then the Greenway, of course, is a great place, especially if you have a bike. Just bike those six miles and you’ll see a number of wonderful projects.

MP: Are there any safety concerns that people should be mindful of?

SD: It’s nighttime; you’re in the city. Be careful and be aware. But the interesting thing [about Northern Spark] is that there are so many people out that it feels like a very comfortable situation, and we have security at all the venues – over 120 volunteers in very bright T-shirts. So if you stick with other festivalgoers when you go between venues, it should be a very safe and fun experience.

MP: What is one thing you absolutely, positively do not want to do?

SD: Not go because you’re feeling too tired, and then you’ll regret it for the next 364 days.

MP: So maybe the No.1 way to prepare is by taking a nap during the day?

MP: What are some insider’s tips for this festival, things you have learned from experience?

SD: Some people carry around their energy drinks. I stay away from them. For me, it’s water and enjoying the night, and it’s already dawn by the time I’m feeling tired. Wear comfortable shoes and layers; be aware of the weather. If it’s supposed to rain, bring an umbrella. It’s very buggy out all of a sudden, so bring some mosquito juice.

We do have a chill space where you can relax and recharge — the terrace on top of Whole Foods [at 222 Hennepin Ave.]. They’ll be selling juices and teas, and you can do some yoga and chanting and recharge a bit before the pancake breakfast [the Northern Spark Pancake Feed at Aria; $20/$25].

MP: Do you have any final words of advice?

SD: Planning doesn’t hurt, if you’re that type of personality. Your strategy can be thematic; it can be completely random; it can be based on the timed events. There are all sorts of different ways to explore, and it’s important for people to understand that and give themselves permission — that it’s not about trying to see everything. If you go to one thing, you will enjoy it, and you will go to the second thing.

(Check out MinnPost’s Lacu at Northern Spark: From the collective mind of MinnPost’s Data Team, Lacu will be an all-night visualization of the 10k+ lakes in Minnesota.)