Venus de Mars repeated that mantra to the roughly 75 fans, friends and family members who gathered Friday night at Patrick’s Cabaret in Minneapolis to celebrate the transgender performance artist/rocker’s victory in her nearly two-year dispute with the State of Minnesota’s Department of Revenue over what constitutes a professional artist.

“You’re an artist! By order of the state!” a woman in the audience shouted early Friday night, to which Venus responded blankly, “Yeah, well, I’ve been an enemy of the state for a while now.”

Clad all in black – torn fishnet stockings, leather thong, boots, bodice, and stars covering her nipples – the 54-year-old Duluth native opened the two-hour program of music, dance and performance art by reading from the state’s decision:

“After reviewing all of the information available, it is our determination that the taxpayer’s art/music activity was engaged in for profit as defined under Treasury Regulation 1.183-2 … This notice supersedes the order of assessment dated July 27, 2013, for tax years 2009, 2010, and 2011.”

From fundraiser to party

In other words, the state dropped its audit, which Venus said she was determined to fight no matter how long the state pressed the matter. Friday’s show at Patrick’s was originally scheduled to be an information session and a legal-fees fundraiser, but when word came late last week that the state had called off the dogs, it turned into a low-key victory party.

Last April, as the case against her and her wife, poet and professor Lynette Reini-Grandell, intensified, Venus told MinnPost, “We’re not rich people who pretend to run a vanity business, finance it out of their large savings resources, and claim deductions on everything so they can avoid paying taxes. I’ve sweat blood to keep my art going because people tell me how important it is to them. And because, yes, it’s my calling.

“They’re trying to go after the easiest targets, the ones who can’t afford to fight, the ones who have had a hard struggle and which is reflected on their tax returns. So they can build an easy case. So they can win. So they can claim money. So they can maybe then say, ‘Look at all these artists, these government freeloaders. Why are we supporting these tax abusers?’ That’s why they’re making an example of me by this audit.”

Friday’s performance at the 28-year-old Patrick’s Cabaret, long known for its support of all stripes of outsider art, was set to a backdrop of, as one observer put it, “sweet relief” if not total vindication for two gifted, generous Minnesota citizens who were made to feel like criminals for almost two years. As a result, the mood was guardedly festive. Yay, our friends didn’t get screwed by the state. Huzzah.

“Yeah, but you don’t know how this will impact other artists,” said Venus early Friday night, sitting in the cabaret lobby before the doors opened. “People can learn a lot from this case, and I hope they do. Springboard [for the Arts] says that as long as you have your receipts and everything in order, you don’t have anything to worry about, and you just go through the process. That obviously is not what happened with me.”

All of Friday’s performances, including Reini-Grandell’s poems and Venus’ songs, touched on themes of transition, new beginnings, creation, creativity and the often strange path of the artist. Venus gave a shout-out to “Orange Is the New Black” star Laverne Cox’s appearance on the current cover of Time magazine. 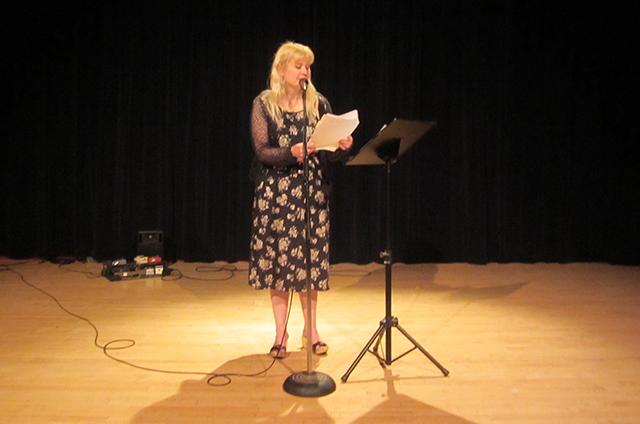 Naked (yes!) dancer Jaime Carrera likewise pawed around on the floor, and, with the aid of minimal props, delivered a funny, angry, sad expression of the human condition and how it feels to be gay, or delicate, or otherwise inner freaky. He was physical and funny, and a perfect complement to dancers Kelly Vittetoe and Eve Schulte, who delivered a memorable, sexy, physical, original and powerful interpretation of Venus’s thunderous glam rock.

All in all, it was an exhilarating performance on a night when it felt like a blow for sanity had been made, and an artist’s pummeled integrity was preserved.

“All the performers brought something new, and that was thrilling,” said Venus Sunday. “But I still feel like this thing has changed me. I feel like I’ve got somebody looking over my shoulder all the time now. It’s a bizarre feeling. Yes, I got through this and I think that’s great and they can’t do anything about this audit and these years, but I feel like they could audit me anytime and start it all over again. I might be in a similar situation again, and it’s an uncomfortable feeling to feel like the state has a right to make a determination on how you live your life as a professional artist. That’s something I’ve never even considered, or even thought about or even worried about.”

Moving forward, Venus will keep working. Friday she’ll take the stage at First Avenue for Rock for Pussy, the annual David Bowie tribute, and June 19 she’ll perform at a singer/songwriter night at the Bryant Lake Bowl.

There’s talk of producers and Kickstarter campaigns, and for her next act, she wants to do something she’s never done before: record an acoustic record. 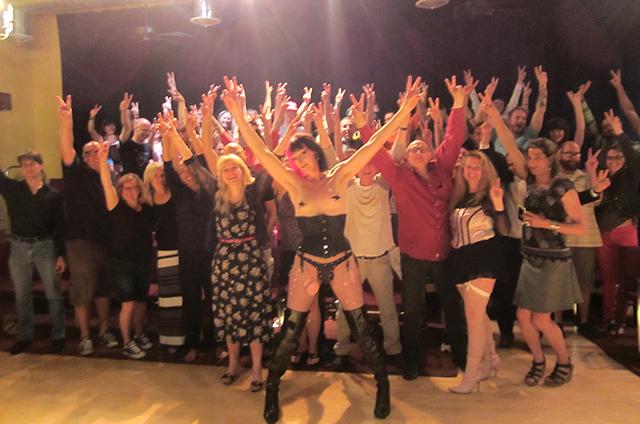 MinnPost photo by Jim Walsh
Venus and supporters make the “V” sign for victory during intermission on Friday.

“I’ve spent a year and a half just kind of stopped, and just working on fundraisers, letter-writing. It was constant, and constant irritation,” she said. “It was making me double-think everything. Double-thinking what I posted on Facebook, double-thinking what I wrote on my blog, what I said in public. It was so oppressive, it affected my relationship with Lynette, and we couldn’t talk.

“I had become so cynical that I was sure that they were going to intimidate me into giving up, but now I don’t have to go back and justify my past anymore, and that is a huge relief. I feel like I can go back to my life and pick up the pieces and build my career again.”