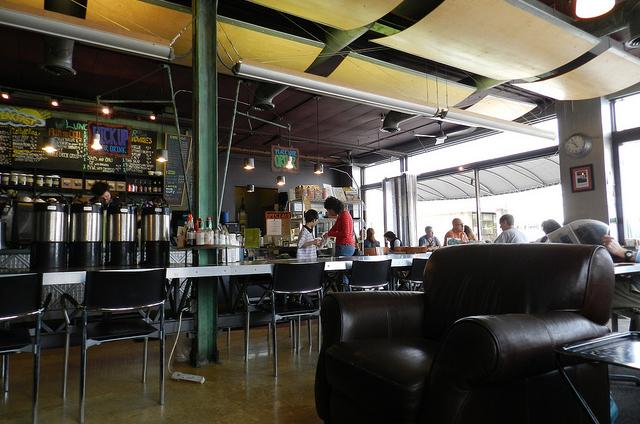 CC/Flickr/Snak Shak
Is the local coffee shop phenomenon going the way of the drive-in theater or the Hula Hoop?

We were the next Seattle, the next big thing for coffee shop culture. In 2006, independent coffee houses were opening like dandelions, inundating our neighborhoods with cozy social refuges.

In the Diamond Lake area of south Minneapolis, coffee shops were so pervasive that it was possible to construct a fitness program by jogging or “crawling” from one coffee shop to the next. Two blocks to Betsy’s Back Porch Coffee on 60th and Nicollet South, nine blocks to  Nokomis Cup on 56th and Chicago, 7 blocks to the new Bloomington Avenue shop on 52nd and then 6 blocks to Sisters Sludge Coffee Cafe on 46th and Bloomington.

Today, three of those four are out of business. Moreover, even a big player like Caribou Coffee recently closed 80 national locations and rebranded another 88 to focus on tea! Is the local coffee shop phenomenon going the way of the drive-in theater or the Hula Hoop? Are we losing a key cultural asset, the neighborhood social hub in this movement? It’s time to take a deep breath, count to 10n and examine what factors may be driving a sea of change.

In the same Diamond Lake neighborhood today, one can walk to two taprooms, and nearby restaurants like the 5-8 Club are carrying a diverse mix of craft beer. The 2011 “Surly law” has facilitated the opening of more than 130 new taprooms in Minnesota. Last year, the St. Paul City Council loosened licensing to enable more taprooms in mixed-use neighborhoods. Will there be a product-substitution impact on coffee shops?

Heeding Norman Cousin’s advice that “history is a vast early warning system,” it’s telling to look back at the history of coffee and alcohol in the U.S.

A surge during Prohibition

Predictably, coffee consumption surged during Prohibition in the ’20s and ’30s. If you didn’t know the password to get into a speakeasy like the Minneapolis 5-8 Club, coffee was all you had. A publication called the Boston Transcript summed it up: “In a sad world deprived of wine, the function of coffee in bringing serene delight is an important one.”

When Prohibition was repealed in 1933, USDA figures flip-flopped to display a sharp decline in coffee usage. Americans exchanged coffee for beer. In the new 2014 Renaissance of surging taprooms and easier beer-wine licensing, will consumers again bypass their local coffee shops in favor of suds?

We had the opportunity to meet with one of the perky owners of Sisters Sludge Coffee Café, Judy Morris-Meyer, to discuss the industry. “Sisters” has been a benchmark in the business since 1997, enduring the Great Recession, withering competition and closed local streets due to construction. She agreed that the demographic is the same for craft beer drinkers and her coffee shop customers: younger professionals with disposable income. However as far as product substitution to taprooms, she asserted: “That doesn’t happen.”

Morris-Meyer wasn’t as certain about another industry technology shift, the burgeoning single-cup coffee machines such as Keurig or Nespresso. If you missed it, Keurig Green Mountain is one of the hottest stocks in 2014, up more than 65 percent. Keurig is the market leader in manufacture of the “Single Cup” coffee machine and sales of gourmet single portion packs that run it. Along with Nespresso, these companies are leading a tidal wave of convenient, fast gourmet coffee into homes across the U.S.

A survey by the National Coffee Association highlighted this movement. Just in the last year, the percentage of coffee drinkers using single-cup machines grew from 20 percent to 29 percent.  Keurig estimates that the number of homes owning their innovative one-cup espresso machines will grow from 12 million to more than 35 million in 2016.

Morris-Meyers sees this as a longer-term trend and predicted that single-cup usage will be: “around for a while. The machines are expensive, a significant investment that will last 10-15 years.” 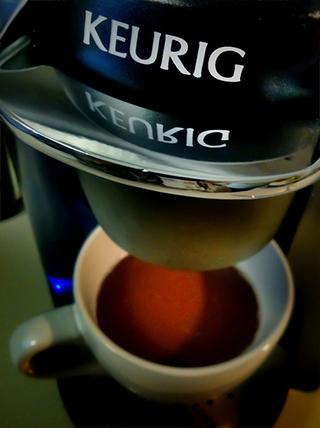 An industry report by the Mintel Group was more ominous: “Roasted coffee’s dominance is forecast to erode as more people opt for one cup at a time.” Clearly, one of the key headwinds for local coffee shops is occurring in our own kitchens. Industry statistics bear this out. Single-cup brewing dropped consumption of roasted coffee from 67 percent of drinkers in 2011, to 52 percent last year.

What other factors are worrying the industry? According to First Research, the target coffee shop customer is 25-40, affluent and educated. An alarming shift for this group is the predisposition to regularly use energy drinks. This substitute for coffee is happening on a widespread basis. In fact, 20 percent of this age demographic is drinking a highly-caffeinated energy drink like Rockstar or Red Bull every day!

Another competitive threat for coffee shops comes from brand expansion by McDonald’s and even local convenience stores. On corners where coffee shops went out of business, today there is ready access to self-serve gourmet coffee sections at Holiday, Kwik Trip, SuperAmerica and the like. On the national scene, facing flat same store sales in the U.S., McDonald’s pulls no punches in stating that coffee including new espresso machines is a strategic focus of the next few years.

All is not lost

These megatrends paint a daunting picture for the local coffee shop. Will the standard: “Let’s meet for coffee” portend very few choices in the future — the Slurpee section of the corner store or a national chain like Starbucks? Will we lose the luxury of walking a few blocks to a shop that knows us and delivers a familiar entertaining atmosphere? All may not be lost after all.

In many conversations about this topic, we frequently heard residents echo that they had also lost local coffee shops in their neighborhood. Was this exodus occurring on a widespread scale? It turns out it is not as bad as it seems. We reviewed Yellow Pages listings from 2006 and 2014 for Minneapolis and surrounding areas. Surprisingly, the number of independent coffee houses is basically unchanged. There also did not appear to be a large amount of turnover in the listings.

There may be clues about this in my conversation with Morris-Meyer of Sisters Sludge. She asserted that Sisters survived the Great Recession and severe competition through consistent service for their customers, business discipline and management presence. With each warning signal, single-cup machines, emerging taprooms — a personal, in-depth knowledge of her customer base emerged and a confidence that “our customers will continue to come in every day.”

This gritty competitiveness may offer clues to the resilience of the coffee shop segment. It’s possible that this sector has weathered the worst of times and has the mettle to thrive in the future. Moreover, there are some green shoots of optimism to lean on.

The coffee industry regularly points to the Netherlands and Europe as a barometer of potential for increasing coffee demand at home. European residents drink 50 percent more coffee on average than Americans, and in the Netherlands drinkers refill their cups twice as often. From a historical perspective, Americans are drinking only half of the coffee they did in 1946, trimmed from 48 gallons per person to 24 gallons today (USDA). Rather astonishing when one recalls that the coffee of days-gone-by was generic, weak and void of taste!

The latest National Coffee Association survey signaled a reversal of fortune and renewed hope for demand. The percentage of U.S. respondents that drink coffee every day grew to 63 percent from 58 percent in just 3 years. That is impressive growth and just the news that independent coffee shops are clamoring for. The resilience of shops like Sisters Sludge delivers a strong signal that those new daily drinkers will again find their way into the friendly, determined coffee shops in your neighborhood.

“Oil and coffee are the two black liquids that run this country.”  — Robert Thompson Syracuse University.

Retired after 31 years in marketing for United and Northwest Airlines, Tony Randgaard has been published by MinnPost, Air Cargo News, The Forward, CNS Air Cargo Focus, and the Rake.