“The Yard” is the new showpiece of the Minneapolis park system. The dream of East Coast interests, it’s unlike any other city park, filled with temporary structures put up by private parties.

This is not a story from the Minneapolis of the near future.

The year is 1949 and this “The Yard” is a very different park from the new downtown park also dubbed “The Yard” planned near the new Vikings stadium.

McCall’s, a national monthly magazine, chose a humble Northeast Minneapolis park next to Edith Cavell Elementary School (a building deemed “portable” and soon razed) as the site for the first American “adventure playground.”

The concept, a progressive idea imported from Europe in which kids take the lead — and the risks — in building their own play environments, is radical even by today’s standards. McCall’s sponsored construction of the “revolutionary playground” and summed up the project this way in a 1950 cover story:

The idea behind THE YARD is simple — to give children their own spot of earth and plenty of tools and materials for digging, building and creating as they see fit. Instead of ready-made playground equipment, THE YARD is stockpiled with tools, used lumber, bricks, tiling, paint, nails, secondhand materials of all kinds. There’s an old railroad boxcar too, a 1934 jalopy and a milk truck body the youngsters turn into anything they like.

In 16 photos, the magazine article displayed dozens of Dicks and Janes carrying lumber and handling heavy tools, along with the claim that “after a year of operation, injuries consist of some banged thumbs and small cuts and bruises for the entire enrollment of over 200 children.”

On a Nov. 3, 1949 visit to the Twin Cities, President Harry Truman’s 31-car motorcade traveled far off any direct Minneapolis-to-St. Paul route so he could see a ramshackle, free-play playground in the city’s furthest northeast reaches.

How did this mess rate a peek by the leader of the Free World? A clue: “This is McCall’s contribution to American children in 1950, the year of the Midcentury White House Conference on Children and Youth.” 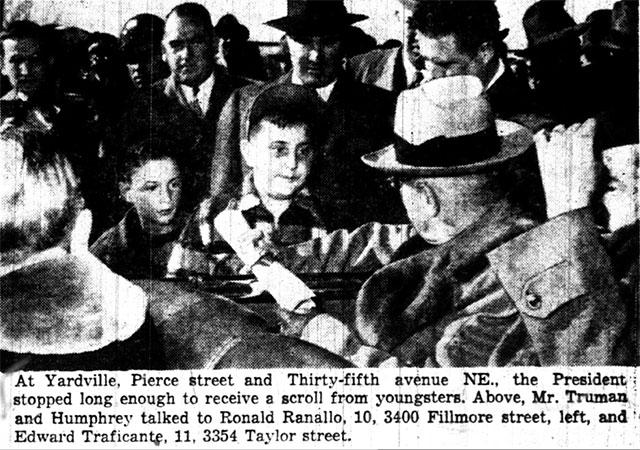 A photo from the Minneapolis Tribune of President Harry Truman visiting with children in the Yard.

The magazine described the local involvement and community planning that went into the Minneapolis model and invited other communities to follow suit.

But that can’t completely explain the unlikely scene the Minneapolis Tribune described at “Yardville”:

On the hilly playground, youngsters are using contributed materials to build about 30 strange shacks. Some were still working desperately to finish their projects before the President arrived on his inspection tour. His car pulled up amid the youngsters’ shrieks. Two of the Yardville kids ran forward to present a scroll to the President. It read:

“We the children of East Minneapolis, Minnesota, are deeply appreciative of all that you have done for us as the youth of America. We hereby name you first citizen of ‘Young Yardville.’ We hope that you will tell other citizens and children all over the United States about ‘Young Yardville’ through your mid-century conference on children and youth.

“The proud youngsters who presented the scroll … got a much-prized handshake in return. … When the parade cars pulled away their playmates crowded around to shake the hands that had shaken the President’s hand.”

Truman’s response to the recitation of the proclamation, according to the Minneapolis Star: “When I was your age, young man, I couldn’t have done as well.”

Bombed-out lots and the Baby Boom

McCall’s credited Denmark and Sweden as originators of what became known as adventure playgrounds, while a recent cover story in The Atlantic magazine emphasizes the movement’s British roots. 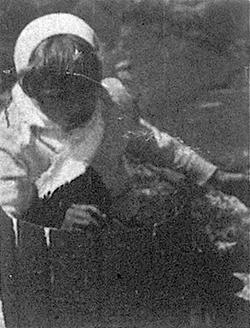 From the October 1950 issue of McCall’s:
“Nancy Zierer puts finishing touches on chair
made from nail keg.”

But the dream that America, newly hooked on the progressive child-rearing ideas of Dr. Benjamin Spock, would turn its dwindling open spaces into the kind of free-form play areas that flourished in postwar Europe’s bombed and blighted lots, never really came true.

I haven’t seen evidence that “The Yard” lasted long after the closure of Cavell School in 1949 and the McCall’s article in 1950. Cavell Park, minus the school building, remains a little-known landmark, with plenty of rolling open space and an inviting, if typical for today, playground, with equipment designed by grownups for a more litigious and (dare we say) more conservative era.

But for a string of months at midcentury, a progressive vision of a creative, child-driven playground became real for a bunch of Northeast Minneapolis kids and the staff and readers of McCall’s magazine — and the president of the United States. 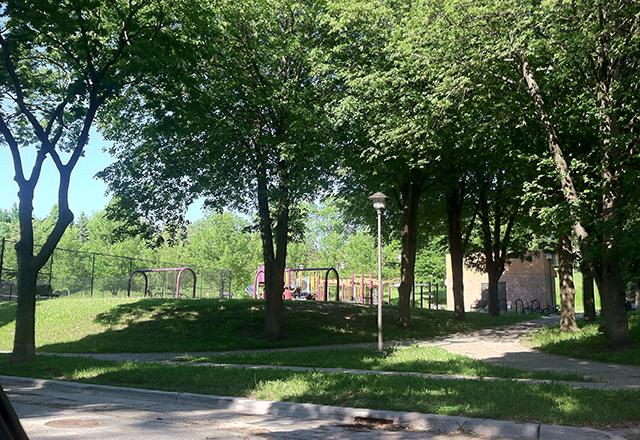 When ‘The Yard’ was Minnesota’s most radical park