The fact is, I’d had “Can’t Hardly Wait” ringing in my head and heart all week, and I know I wasn’t alone, so it was pretty perfect that, at the remade Replacements reunion show at Midway Stadium Saturday night, I ended up under the left field scoreboard in a mosh pit with a smattering of friends, family and strangers, and getting elbowed in solidarity with a chain-smoking whiskey-sipping dude who sang along to Paul Westerberg’s cry for a soul mate in the wilderness with a knowing bloody howl and who, like seemingly everybody else in the whole damn place, knew all the words, every syllable, every scar.

At one point he was thrusting his cigarette at the stage in time to the big beat; the next, just before the chorus, I looked down and found him on all fours barfing in the dark, and, with the bright stars of St. Paul shining down on his back, finally passing out and I know I speak for everyone in our little corner of the world who got splashed by his chunks, thanks to the large man who picked up Mr. Whirly and carried him off to safety.

Anyway, “Can’t Hardly Wait” might be the ultimate expression of “this urge that is the Replacements,” as one fan described it to me Saturday night, for sure an anthem of great joy and desire and anticipation, and by the time the remade ’Mats hit the stage around 9 p.m. at Midway, the excitement and mass hypnosis of rock and roll hoochie-coo was in full effect to the point where, when the band offered up touchstones by the Jackson Five, Jimmy Reed, and Jimi Hendrix – not to mention their ode to Big Star founder “Alex Chilton” – the entire baseball stadium was catapulted back to the free and freaky ’70s, when smiley faces, AM pop radio, disco, glam, and punk rock and partying with the Minnesota Kicks at Met Stadium was all the rage.

Or maybe that was just me.

At the very least, Saturday night was nothing short of a cultural moment, and a blow struck for rock & roll as one of mankind’s most enduring cries of freedom and fun. Speaking of which, before heading into the show, I came upon this scene by the railroad tracks abutting the Midway parking lot, which most of the late afternoon and early evening turned into something of a low-burn Burning ’Mats tailgating orgy, albeit with long port-a-potty lines. “If I don’t get a ticket to the show,” said a buddy, “I’m gonna sit by the railroad tracks and drink some cheap wine with [the ghost of] Bobby Stinson.” Consider these dudes in on the salute, seeking relief not long before the Replacements took the stage: 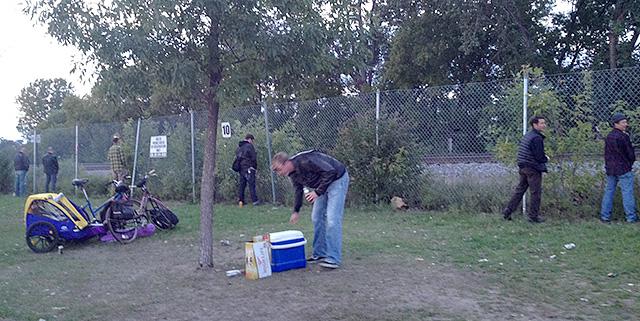 Maybe the best testament to the lasting effects of Saturday night’s concert came Sunday, when fans all over the metro area could be spotted sporting freshly purchased ’Mats swag. On a pole in the Midway parking lot Saturday night before the show, someone had hoisted a black and red lumberjack shirt – flying the flannel – and that was the drill all day Sunday, as T-shirt-clad denizens of Replacements nation gave one another a nod, a quick review, and posed the question that was on everyone’s mind, and likely will be for a long time to come: 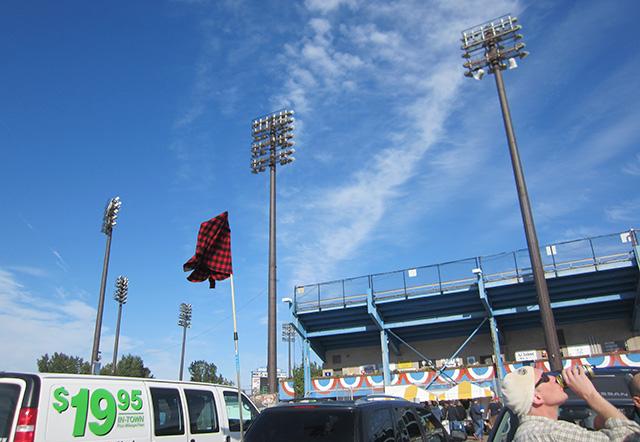 MinnPost photo by Jim Walsh
Flying the flannel at Midway.

If you were, you felt it – the tremor of all those feelings conjured by all those songs in all those souls for the first time en masse.  If I heard it once I heard it a hundred times Saturday and Sunday, the one about how lives were changed by the show, performance, by one song or another, or just the whole of this singular and singularly moving 80-minute concert. Which is to say for many it was a heady – if not exactly intimate – experience to bear witness to this great band coming back to life, beyond the recordings and Youtube videos that have kept their legacy and catalog alive all these years.

Incredibly enough, Replacements Saturday kicked off with the news that a thoroughbred racehorse named after the band’s founding drummer, Chris Mars  (who has not taken part in the recent reunion shows), won the fifth race at Canterbury Park that afternoon.

A few hours later, the accomplished painter and filmmaker’s former bandmates, after 23 years in mothballs, won a race against time and hit homerun after homerun in a doomed minor league baseball stadium on a gorgeous autumn night. As my mother likes to say, will wonders never cease? 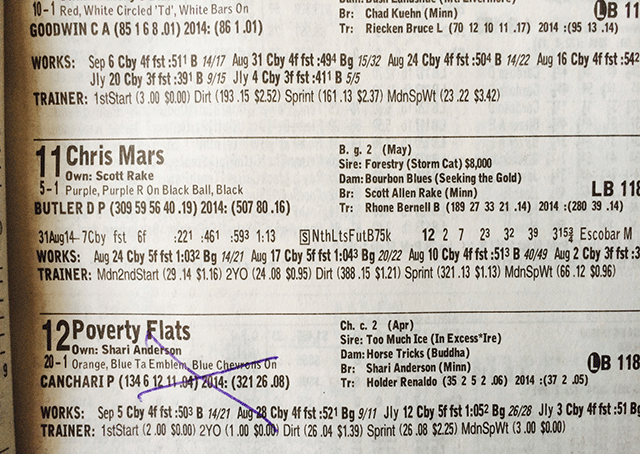 MinnPost photo by Jay Walsh
The Daily Racing Form program from Sept. 13, 2014. Chris Mars, the horse, a 3-1 favorite, won the 5th race at Canterbury Park Saturday and paid $8.40 to win.

At the end of a week that brought to the Twin Cities jubilant concerts by first wave punks Paul Weller and the Buzzcocks, the remade Replacements took the stage looking like a forever-plaid hybrid of the New York Dolls and Bay City Rollers, and ripped through a muscular set of rock & roll that had 14,000 people digging up the dirt infield and outfield for souvenirs.

That’s my review, but the fact is that in this case, words fail. Other than to say it’s no exaggeration to say that Saturday’s triumph of so many spirits is a testament to all sorts of mysteries and mysterious forces, and proves, perhaps more so than ever, that the cauldron of live music and memory can make for a profound, illuminating, inspiring and combustible energy exchange. 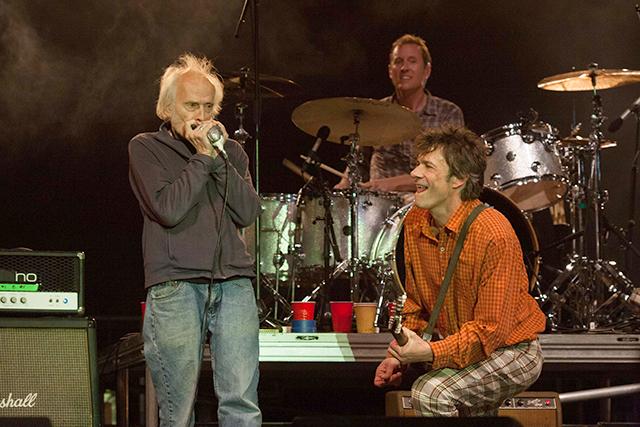 The fuse for this explosion was lit 23 years ago, the last time anything called the Replacements performed live locally, and that alone fueled the fun, the time machine, the mass catharsis. Highlights abounded, including the brotherly love obviously on display between Tommy and Paul, a couple of pals grateful to have refound each other; Tony “Little Sun” Glover joining the band on harmonica and the songs – “Favorite Thing,” “I’ll Be You,” “Takin’ a Ride,” “Androgynous,” “I Will Dare,” etc. — being played with such a massive engine and over a PA befitting Olympus.

Chill after chill came with various songs, most memorably “Bastards of Young,” “Unsatisfied,” “If Only You Were Lonely,” “Valentine,” “Kiss Me on the Bus,” and the singalongs for “Androgynous” and “Swingin’ Party.” My knees went weak when the opening chords to “Left of the Dial” rang out across the big sky and Westerberg sang to a throng made up of thousands of people who came of age on independent music, media and art, “Read about your band in some local page, didn’t mention my name,” like he was still ticked off about it.

The wistful lyric disappeared into the drums, guitars and night, and so eventually, too, did the Replacements – but not the memories of what they’ve given us all these years, especially of that Saturday night in September, when the swingin’ party down the line never felt more powerful or relevant. Long may we hang. 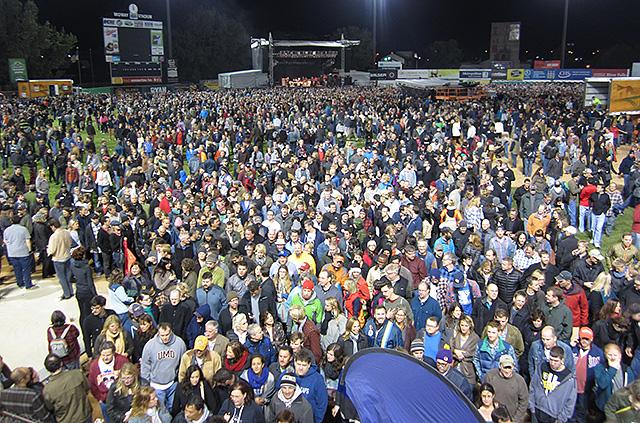 The Replacements at Midway: A night to remember