“It’s pure serendipity,” said William Schrickel, music director of the Metropolitan Symphony Orchestra, during a rehearsal Tuesday night at Central Lutheran Church in Minneapolis. “I’d love to take credit for it, but I can’t.”

Schrickel was referring to the fact that in a concert Sunday he will lead the orchestra in the premiere of a work by Dominick Argento, “Ode to the West Wind,” subtitled Concerto for Soprano and Orchestra, 58 years after it was written. A week later, to kick off its 46th season, Vocalessence will present a work of Argento’s at Orchestra Hall that the 86-year-old composer says – firmly – will be the last he will ever write, a choral piece titled “Seasons,” a setting of poems by St. Paul poet Pat Solstad.

This conjunction of first and last, early and late, works by Minnesota’s most eminent composer, suggests intricate planning, when, in fact, it’s no more than chance. As Schrickel tells it, Argento approached him at a concert by the musicians of the Minnesota Orchestra last year during the lockout. (Schrickel is the orchestra’s assistant principal bass.)

He asked if Schrickel would be interested in programming his Ode, a setting of the Shelley poem, which he had composed while a graduate student at the Eastman School of Music in Rochester, N.Y. After a school performance in 1957 that featured Argento’s wife, Carolyn, in the solo part, and thoroughly impressed the Eastman faculty, the work was accepted by Argento’s publisher, Boosey & Hawkes, but the manuscript remained on the shelf for decades gathering dust.

Said Schrickel, “When Dominick approached me about doing the piece, “I jumped up and down, saying ‘Are you kidding? You tell me when the parts will be ready, and it will be on the next concert.’”

‘A brilliant and dramatic work’

“It’s a brilliant and dramatic work,” said Schrickel. “If one didn’t know the background of the piece, there would be no reason to think it wasn’t composed within the past year rather than 58 years ago.”

Argento gave him a tape of the Eastman concert. “She was tremendous,” Schrickel said of Carolyn Argento’s performance. Only 23 at the time – the Argentos had been married just a year – Carolyn, Argento always said, was her husband’s muse and constant companion. She died in 2006 of an undiagnosed ailment. “When Dominick says that every note in the piece was written with her voice in mind, it’s no surprise when you hear how good the performance is,” Schrickel said.

Maria Jette, who will sing the Ode in Sunday’s concert, is no stranger to Argento’s work. She has sung many of his songs, and she performed the soprano part in the recording on the Virgin Classics label of Argento’s orchestral work “Mask of Night” with Philip Brunelle conducting. She, too, had heard the Eastman tape and for some years had been suggesting to Argento that he arrange for a public performance of the Ode. Earlier, she had secured from Boosey a score for the work. The publisher had sent her the original manuscript written the old-fashioned way — painstakingly by hand in ink. They never asked for it back.

“Maria actually stole this manuscript,” Argento said, laughing, as he turned the pages of a score he hadn’t seen for more than half a century. The work has now been officially published, both parts and piano reduction, all in the contemporary manner, by computer.

“Actually, I’m not surprised the piece wasn’t done all those years,” Argento said. “A half-hour work for soprano and symphony orchestra isn’t going to be a best-seller.”

He recalled the first performance. “Carolyn spent all of that day at Eastman practicing it over and over. We went out to dinner, after which she ran through it one more time. I said, ‘I’m surprised you have any voice left.’ And yet, at the performance, she was stunning.”

A teacher, noting Argento’s flair for vocal writing, suggested that he set Shelley’s famous Ode to music. He wasn’t enthused about it, but when he learned that Shelley had written the poem while sitting on the banks of the Arno in Florence, where Argento had spent a year on a Fullbright fellowship, he got to work on it and composed it in five weeks. “My teacher, Bernard Rogers, was impressed with the score. He said, ‘There’s your Ph.D. thesis. What do you want to do next?’ I hadn’t thought of it as my thesis.

“Later when the composer Howard Hanson, who had conducted it, finished playing a tape of the performance for my doctoral oral examination committee, he said, ‘Carolyn ought to receive a degree of some sort, too, for her wonderful rendition, perhaps a Ph.T – Putting Hubby Through.’ ” 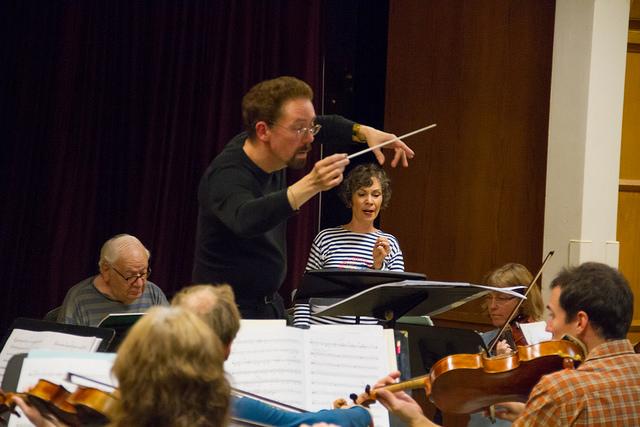 The veteran choral conductor Dale Warland will conduct Argento’s “Seasons” in the concert Oct. 26, a program titled “Made in Minnesota.” Philip Brunelle will conduct the remainder of the program. “Seasons” is dedicated to Warland, who conducted the premiere in Winona in July.

Calling the four-movement a cappella work “a masterpiece,” Warland said, “When I first looked at the piece, I wasn’t sure I could bring it off. It didn’t speak to me as quickly as I had hoped. But as soon as the voices took over in rehearsal, it was just magic. Dominick’s writing sticks in my aural memory like that of no other composer I’ve done for a long time. Weeks after I had rehearsed and performed it, certain phrases were still ringing in my head.”

Solstad retired in 2001 from the School of Music at the University of Minnesota, where she had known Argento for many years. Their friendship had been especially meaningful in the period after Carolyn Argento’s death. “He was so grief-stricken, and I thought he needed some support. But he got through it,” she said.

In 2007, she showed him a poem she had written on “a gloomy autumn day.” She called it, appropriately, “Autumn.” Argento encouraged her to write three more poems and the quartet became “Seasons,” which he set to music. Hearing the performance in Winona was “an absolute thrill,” she said. “To hear my words come to life with that music was really something.”

Solstad plays a ukulele in her spare time, and she has – jokingly – suggested that Argento compose a concerto for ukulele and orchestra. Argento, however, is adamant. “Seasons” will be his last work. Widely considered one of the most important opera composers of his time, a Pulitzer Prize-winner (“From the Diary of Virginia Woolf”) and Grammy-Award winner (“Casa Guidi”), Argento has been a vital force in Twin Cities music for more than 50 years, a co-founder of Minnesota Opera, a composer for many productions at the Guthrie Theater, composer laureate for the Minnesota Orchestra and a respected teacher at the University of Minnesota.

Argento remains a hearty 86-year-old who works out at a gym three times a week. The problem that ails him is his hearing, an inner-ear malfunction that distorts not speech so much as musical sound. “When I sit at the piano improvising, what I hear isn’t exactly what I’m playing,” he said. “When I put notes on paper, they don’t sound right. And there’s no way to treat it, short of implants, and I don’t want to go that route.

“Frankly, I’m happy. I’ll be 87 in a few weeks. Just about every composer I know died before that age. I don’t know how much more I could write. I’ve composed 14 operas.”

‘Postcard From Morocco’ in Cape Town

His works, of course, live on. A revised version of his “Valentino Dances” was a critical hit for Minnesota Opera last season. Schrickel has programmed “Casa Guidi” for the final concert in the Metropolitan Symphony’s season, and on Oct. 27, the composer’s birthday, Brunelle will fly to Cape Town, South Africa, to conduct “Postcard From Morocco,” Argento’s most often-produced opera.

In a conversation after the rehearsal Tuesday, Jette asked Argento, “Let’s say you had five more productive years left, and they could put a thing in your ear and it would help. What then?”

He sighed. “I don’t know. I guess I feel like Rita Shane, who just died. I read her obituary. (Shane, who originated the title role in Argento’s “Miss Havisham’s Fire” at the New York City Opera, was quoted in the New York Times Monday as saying, concerning her early retirement, “Nobody will ever hear me less than I was. I’d rather it said ‘too soon’ than ‘oh, finally!’ ”)

“I’d rather quit now than have people say, ‘Is he still writing?’

By chance, both Argento’s first and latest works to be performed in October