At one point during Eric Robel’s excellent and essential new documentary “The Color of Noise,” Tom Hazelmyer tries to explain what makes the pushing-50 noise rock pioneer tick: “I have this propensity for, if I really like something and nothing’s happening around it, I feel a need to make something happen.”

Therein lies the simple infectious bug behind Hazelmyer, the ex-Marine and punk band leader who, in the ’80s and ’90s in Seattle and Minneapolis, built from the ground up a label (Amphetamine Reptile Records), bar (Grumpy’s), music scene, poster art scene, and an enduring aesthetic by making flipping the bird into a fast, furious, funny form of entertainment, expression, and real rock & roll rebellion  – all of which is crucially captured by Robel and crew in “Noise,” which gets its one-night-only area premiere Wednesday at the Riverview Theater (9 p.m., with a Q&A with Robel to follow).

See it. Like Haze himself, the doc is smart, passionate, irreverent, and a historic snapshot of an all-but-lost slice of the pre-Internet American punk rock underground. With Hazelmyer at the helm, AmRep brought together some of the freest and freakiest outsider artists of our time, and created a hilariously hooligan community whose raison d’etre is more in line with Groucho Marx’s “I’m Against It” than any political party. If that sounds like a hippie dream come true, rest assured that the musicians and artists in the film give each other as much grief as they do their fearless leader and skewer the idea of “music community” even as it blossoms around their puritanical punk rock lives (“What is this, a commune?” accuses Rich Kronfeld, aka the notorious Dr. Sphincter, during a tour of the old AmRep headquarters).

“The Color of Noise” captures all that – along with Hazelmyer’s uncanny penchant for finding undiscovered talent that jibes with his exacting and eternally curious tastes – in all its loud, politically incorrect glory and fury. The live footage of the Cows and interviews with the band members alone is worth the price of admission, bringing back as it does a Jagermeister-fueled time when the Cows’ incendiary shows at the Uptown Bar and 7th St. Entry upped the ante for every band in town.

“I visited Minneapolis while drumming with Shannon Selberg and his band the Heroine Sheiks, and that’s when I met Tom,” says Robel by email from his home in Baltimore. “I kept looking around his restaurant, the posters, the vinyl, then out back to the OXOP gallery. The different artists that showed there, the toys, the stock room and posters, I thought, ‘I can’t believe no one has made a film about this man.

“A few years later I was looking to do a film project and then heard about the AmRep 25th anniversary show. I wrote to Haze and told him I wanted to shoot all the bands every day and night with five guys. He agreed and when I saw him that weekend, I gave him a multipage presentation with the whole film outlined, and with every person listed I wanted to interview. I did my homework, and had an art angle to the story so that is what he liked about it. It wasn’t just going to be about the bands, but about the art as well.”

Hell if “The Color of Noise” doesn’t feel like a refreshing blast of true alternative rock, which was festering in the AmRep grooves before, after, and when Nirvana hit the mainstream. But more than fame or anything else, over the course of the film’s two hours it becomes clear that the single common denominator shared among all the AmRep bands is a Ramones-like simplicity and a free-jazz-like penchant for sonic experimentation and improvisation, and an all-consuming desire to play as loud as is humanly possible towards self-entertainment and putrid poetry and the pushing of every envelope available. Or, as Today’s The Day singer Steve Austin told Robel, “This [stuff] was enough to make any redneck want to kill you.”

More highlights abound: We learn that Hazelmyer discovered Helmet, the New York noise boys who inspired a post-Nirvana major label bidding war, via Twin/Tone Records’ Jill Fonaas, who heard the band’s demo tape and passed it along to Hazelmyer. God Bullies singer Mike Hard comes off like a jacked-up pulp fiction writer and preacher gone to hell and back and back again. The footage of Hazelmyer’s band Halo of Flies performing their last show in Europe is invaluable, as are the interviews with the many musicians who talk candidly and angrily about the heroin abuse that permeated the punk and grunge subcultures of the day and claimed the lives of AmRep artists Kristen Pfaff (Janitor Joe) and Sean McDonnell (Surgery).

Then there’s the music, and a helluva lot of screaming, from the likes of Boss Hog, the Melvins, Helmet, Hammerhead, Unsane, Supernova, Nashville Pussy, Calvin Krime (whose singer/keyboardist, Sean Tillman, went on to star on the worldwide stage as Har Mar Superstar), and a glorious round-up of the most unusual suspects from the noise scene, including Hazelmyer’s partners in AmRep crime Pat Dwyer and Mike Wolfe; his wife, Lisa Premick, and their hilarious art- , rock- and comic books-loving kids; Neglecters/Cows/Jayhawks drummer Norm Rogers; First Avenue photographer Daniel Corrigan, and Your Flesh editor/publisher Peter Davis.

The last half of the film is devoted to illustrating, in glorious punk art-rock color, how Hazelmyer commissioned artists like Frank Kozik, Chris Mars, Coop, Sheperd Fairey, and others for vinyl, CD and poster artwork, and in doing so helped launch a resurgence of the concert poster as a serious art form. As Cleveland booker and record storeowner Derek Hess told Robel, “It’s two different art forms, feeding off each other. It’s kind of like the Impressionists, who were different but there was a common thread. The ideas expanded together and became a special time and place in history.” 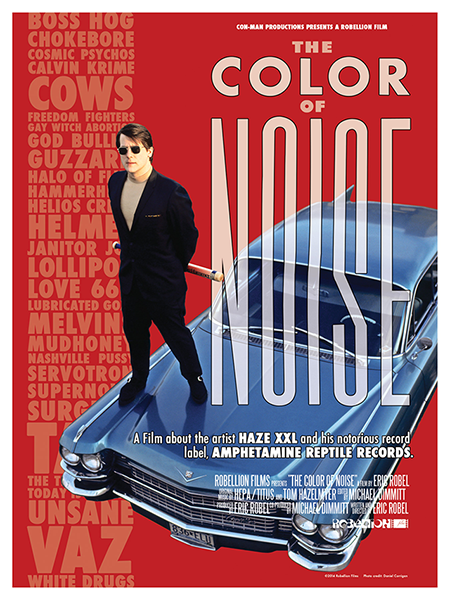 To be sure, as “The Color of Noise” attests time and time again, it’s no stretch to see that what Hazelmyer has created could have a similarly lasting impact. Just listen to Kozik, Fairey and Coop tell Robel, who discovered AmRep records as a young vinyl-collecting musichead growing up in Baltimore, what Hazelmyer has meant to their careers.

Kozik: “Peter [Davis] did an article about my stuff in his magazine, and I started doing stuff for either [Davis’s] Creature Booking bands or Amphetamine Reptile. If I had never gotten the articles in Your Flesh, if I had never done all the posters for Tom’s bands, I would never have achieved a certain level of credibility.”

Fairey, whose AmRep work predates his “Obey” and “Obama Hope” empire by a decade: “Frank Kozik was doing posters for bands I liked, like Mudhoney and the Beastie Boys and the Melvins, especially. He had also done posters for some other bands on a label called Amphetamine Reptile Records, and it was the perfect fusion of subversive pop art, psychedelic art, and punk rock. I think the first one I saw was a Helio’s Creed poster with Lee Harvey Oswald being shot, but holding a microphone. Frank Kozik made something like 200 posters in a year, and I thought, ‘Man, I’ve gotta get off my ass.’”

Chris Coop, whose smoking Satan lighter launched Hazelmyer’s sleek collectible Zippo line: “In ‘91 I started doing giant full color posters in all kinds of styles. My whole ethos when I was doing those posters was, I wanted to do the biggest nicest poster ever made for like, the smallest bands. To find someone in the music business, somebody who has any sort of decent character, it’s so … rare. And the fact that [Hazelmyer] also has good taste in the music he puts out, and the way that he presents the label – he designed all that product, he’s kind of underrated in that respect because I think all the AmRep product is as good or better than the SubPop stuff and I don’t think he’s ever gotten any props for that. “

“The Color of Noise” goes a long way toward giving Hazelmyer his due as an innovator, artist, and more. A good chunk of the last part of the film is dedicated to friends and collaborators singing the praises of Hazelmyer as a friend, father, husband, musician, artist and inspiration. As Hazelmyer’s best friend and bar business partner Pat Dwyer sums up AmRep’s two-decade run, “Things dissolve, things go out of business, but the big lesson for me is, did you do it right? Hazelmyer did it right. He informed everybody.”

Which is what “The Color of Noise” gets at so well – not that its subject matter takes too much of it too seriously.

“It’s just trying to break out of the norm,” says Hazelmyer early in the film. “To present art shows and rock shows in a different way just to change it up, to make people look at it in a different way. I wasn’t trying to reinvent the wheel, just make it wobbly so it’s interesting.”

‘The Color of Noise’ celebrates the legacy of Amphetamine Reptile Records