Cities throughout the country reacted with shock and mourning to the death Sunday of composer Stephen Paulus – in Atlanta, where Paulus had served as composer-in-residence with the Atlanta Symphony; in St. Louis, where four of his 10 operas were premiered; in Grand Rapids, where in 2012 that city’s orchestra and chorus presented what remains perhaps Paulus’s most powerful creation, the oratorio “To Be Certain of the Dawn,” inspired by the Holocaust during World War Two.

Even so, it’s in the Twin Cities that Paulus’s passing is most deeply felt. It’s where, in a bustling but orderly office in his home on Summit Avenue in St. Paul, he ran his own publishing company, Stephen Paulus Productions, which became a business model for composers everywhere. The son of a chemical engineer who was also a serious amateur organist, Paulus was one of the few composers of his time not connected to pop music who was able to live off his commissions without taking a teaching job.

And it’s where the majority of his vast output of compositions were first heard – works for chorus, orchestra, band, chamber ensemble, piano, organ and solo voice.

Paulus’s own musical voice – tonal in its harmony, mildly dissonant, lyrically rich, rhythmically pungent – had been silent for the past 15 months, due to the stroke he suffered July 4, 2013. There was occasional word of slow recovery, followed in recent weeks by rumors of decline. He died in an assisted care facility, survived by his wife Patty and sons Greg, 30, and Andrew, 25. He was 65.

To people who knew him, Paulus’s stroke and passing seemed inexplicable, given his relentless productivity and his aura of youth and quiet energy. In his early 60s, he looked 10 years younger. He was an even younger-looking 30 and fresh out of graduate school in 1979 when he composed his first opera, “The Village Singer,” on a commission from the Opera Theater of St. Louis. Prior to that, he had hardly even seen an opera production, he once admitted. The first one he attended, just a few years earlier, was his teacher Dominick Argento’s “Postcard From Morocco,” given by Minnesota Opera.

“Village Singer” was well received, but it was the follow-up in St. Louis, in 1982, “The Postman Always Rings Twice,” based on the steamy, violent James M. Cain novel, that put Paulus on the map. Andrew Porter praised the work and its composer in the New Yorker, writing, “Like its predecessor, the new piece shows that Paulus is an uncommonly gifted opera composer. His vocal lines sing naturally. Vernacular inflections are made lyrical. His stage timing is effortlessly sure. His musical forms are shapely. His orchestra (a fairly small one, with six woodwinds and five brasses) is deftly handled.”

The critic of the St. Louis Globe-Democrat, James Wierzbicki, was less restrained in his praise. He opened his review, saying, “If ‘The Postman Always Rings Twice’ doesn’t make Stephen Paulus one of the most sought-after opera composers of the 1980s, I’ll turn in my music critic’s badge and forevermore keep my opinions to myself.”  (As it turned out, both predictions rang true. Paulus became highly sought-after, and Wierzbicki eventually gave up his critic’s badge, though for other reasons.) “Postman” earned the additional distinction of being the first American opera to be presented at the Edinburgh Festival. Twin Cities audiences saw a production of the work by Minnesota Opera in 1986. 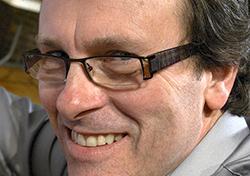 Remembering composer Stephen Paulus, a delight to audiences and mentor to artists

The prolific and gifted composer leaves behind more than 500 works of classical music and a legacy for helping other artists.

From 1982 to 1986 Paulus held the position of composer-in-residence with the Minnesota Orchestra. He composed four large works for the orchestra during those years: Concerto for Orchestra, Ordway Concerto (commissioned for the opening of the Ordway Center in 1985), Symphony in Three Movements and “Voices” for Chorus and Orchestra.

The recording on Nonesuch of the Symphony in Three Movements conducted by Neville Marriner prompted a comment by a critic in Opus magazine that seemed relevant as Paulus’s skills developed: “Throughout, Paulus’s rhythmic urgency is combined with a grace that, while not often encountered today, was a hallmark of such American masters as Copland, Barber and Piston. Paulus seems a natural successor to this tradition.”

Put differently, for this listener, Paulus’s music, rather tightly wrapped in its early years, almost neo-classical in its formal perfection — at times impersonal — took on warmth and color as he moved into his middle years, a development that, while expanding his expressive range, connected him with the great Americans of an earlier era. As evidence, his three pieces for trumpet and orchestra became progressively looser and more American-sounding: “Concerto for Doc,” 1991, written for Doc Severinsen; Concerto for Two Trumpets, 2003, for Severinsen and Manny Laureano; and “TimePiece,” Paulus’s collaboration with his son, Greg, a trumpeter, which premiered in 2011, with Osmo Vanska conducting the Minnesota Orchestra.

The project with his son seemed to give Paulus a special joy, as a visitor to the Paulus home noted that year. They were, one could surmise, from different musical worlds — the father, a traditional classical, albeit contemporary, composer, the son, a practitioner of far-out jazz and up-to-date electronic dance music.

“I think we’re pretty compatible, don’t you?” said the father. “What kind of magazine would we be on the cover of?”

The father:  “Yeah, and it would be only two pages long.”

Paulus’s final opera, “The Shoemaker,” a retelling of the Good Samaritan story, was premiered in 2012 at Plymouth Congregational Church in Minneapolis. The production, staged by Gary Gisselman and conducted by Philip Brunelle, was gentle and moving. Paulus’s prowess as a theater composer had continued to develop. The words of an early collaborator, Colin Graham, rang true. “The critics most often compare Paulus to Benjamin Britten,” Graham said in 1987. “It’s because he has the same facility for setting the voice to the English language and for coloring the words orchestrally. But Steve’s voice is personal to him. There’s a lot of steel in his music, a bittersweet quality and a great deal of wit.”

The gifted poet Michael Browne, Paulus’s most frequent collaborator, wrote the libretto for “The Shoemaker” as well as for what is probably their most memorable project, “To Be Certain of the Dawn,” a work premiered at the Basilica of St. Mary by the Minnesota Orchestra in 2005 and subsequently recorded for the Swedish BIS label and repeated at Orchestra Hall in 2008.

Commissioned by the Rev. Michael J. O’Connoll, rector at St. Mary’s, as a gift to Temple Israel and, more generally, to the Jews of Minneapolis, the work’s premiere coincided with the 60th anniversary of the liberation of Jews from the Nazi death camps and with the 40th anniversary of the church’s 1965 declaration that the Jews weren’t responsible for the crucifixion of Christ. Its subject being the long history of Christian anti-Semitism, the event carried added extra resonance: In 1946 Minneapolis was named, famously, “the most anti-Semitic city in America” by the journalist Carey McWilliams.

The work’s title quotes Rabbi Abraham Joshua Heschel: “This is the task: in the darkest night to be certain of the dawn, certain of the power to turn a curse into a blessing, agony into a song.” Browne’s deftly woven three-part structure proved to be an apt vehicle for Paulus’s subtle and dramatic score in a production that was visually stunning. Photographs of Jewish children playing in the street who later died in the Holocaust were projected onto the stage, and at the end the basilica’s vast space was ablaze with 1,500 candles held by audience members. Following the repeat performances in 2008, the work was given in St. Cloud and in a series of concerts in Germany near the former sites of concentration camps.

No doubt, Paulus had many more such works, large and small, yet to write. His goal as a composer, he said in an interview in 1999, was “to move or transform an audience, so that they might come out thinking, ‘That piece had some magic, some sizzle to it.’ Maybe it might make them think a thought or idea they hadn’t thought before. Maybe it could suggest a memory or a desire or an accomplishment that’s transforming, that’s connecting.”

To be sure, it was a goal he achieved time and time again.