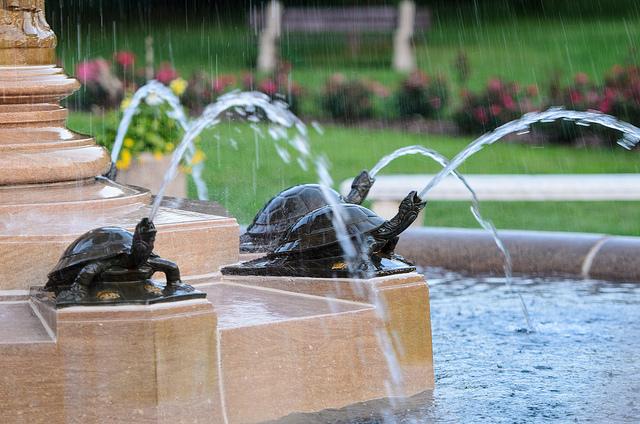 CC/Flickr/m01229
Public art is sometimes messy and politicized and you might get a call from Joe Soucheray, but ultimately no amount of facilitating through work groups and studies can replace a city’s commitment to putting its money where its art is.

In the summer of 2008, I was ambushed by Joe Soucheray. A producer for KSTP’s “common sense” curmudgeon had called me and asked if I was the guy who had defended artist-designed drinking fountains in the Star Tribune that day. Thirty seconds later, I was on the air, answering for the sin of supporting public art.

What kind of moron spends half a million bucks on outdoor drinking fountains in Minneapolis, Soucheray asked, something you can’t even use half the year? The same kind of morons, of course, who built golf courses, beaches and soccer fields here. Or built the fountains in Central Park or the reflecting pool in Washington, D.C. But that’s not what I said. In the vise of Soucheray’s animus, all I could eke out was Richard Florida’s trope that creative cities become affluent cities. I might even have mentioned the “bean,” the popular public artwork anchoring Chicago’s Millennium Park. Soucheray yanked my pantywaist and hung up.

Art is messy. Public art even messier. And now Minneapolis Mayor Betsy Hodges has stumbled into the tar pit. In her proposed 2015 budget, slated for public hearings today (Nov. 18) and Dec. 10 at City Hall, she zeroed out the annual half-million dollars or so requested for public art. Conservation of the city’s 60-some public artworks would be deferred along with new projects — missed opportunities to integrate art into construction at 29th Street, Webber Park, the 40th Street pedestrian bridge over I-35W, and the like. It’s something that hasn’t happened in 30 years of public art programs in Minneapolis, even during the Great Recession.

Hodges is now struggling to defend herself, pointing to other money she has approved for the arts, noting the public art allocations that haven’t been spent yet, and promising to reinstate the funding in 2016. But she’s under no obligation to do so. And following the money reveals a tug-of-war over art that threatens to pull apart Minneapolis’ ambitious bid for creative city-hood.

Back in 2008, when the drinking fountains were under fire, I was the vice-chair of the Minneapolis Arts Commission, the citizen board that advises the city on public art. Over the years, through the Art in Public Places program, it’s overseen the construction and maintenance of dozens of artworks, from neighborhood gateways to the Hubert Humphrey statue in front of City Hall. It’s Ayn Rand’s nightmare, basically, full of committees and community forums. But done right, you get a civic icon — and done wrong, you still get people snapping selfies with Sid Hartman’s statue.

Around that time, Minneapolis began a parallel initiative based on Richard Florida’s theories of creative cities. Every few months, representatives from city departments and the Arts Commission would meet in the office of then-City Coordinator Steven Bosacker, the mayor’s right-hand man, to discuss how creativity was being directly integrated into operations. Mostly it wasn’t. So in 2006, the city upped the ante, hiring its first artist-in-residence and, in 2011, a director of Arts, Culture, and the Creative Economy. There would now be two tracks for art in the city: one through the time-honored, if unpredictable, democracy of the Arts Commission, the other running directly through the upper reaches of City Hall.

Over the years, the buzzwords in City Hall have shifted from Florida’s ambiguous ideas to the more actionable “creative placemaking” — neighborhood revitalization through art projects. But the city’s goal remains the same: involving artists “upstream” in urban planning, as an imagination filter, such that blight comes in and coolness goes out — “a city,” as Minneapolis’ latest placemaking manifesto states, “that is a living work of art.”

And suddenly there’s a lot of money behind it, mostly from outside sources. Like Ford, Mellon, Rockefeller, Bank of America, MetLife, and National Endowment for the Arts money in the form of ArtPlace, the New York-based consortium that over the past couple years has jumpstarted Minneapolis’ Creative CityMaking initiative with more than a million dollars to embed artists in city operations. This is where Hodges is placing her budget bets for 2015: $75,000 for Creative CityMaking generally; $35,000 for a plan called the Creative City Road Map; and $60,000 for a Creative Index Report measuring the vitality of the city’s creative community.

It sounds undeniably progressive, European, the Finnish fantasy of a designed society: artist-engineers unraveling the knots of growth, transportation, obesity, and health care through creative thinking, when they aren’t hiking the urban forest. The North Side and Central neighborhoods could be structurally reinvigorated, not just boarded up with colorful murals. Resolving the light-rail conundrum around Cedar Lake, saving Block E — it’s hard to think of a chronic problem that wouldn’t benefit from someone who paints the sky green and horses blue.

But the fear among longtime advocates of public art is that the city is pulling back on the traditional way of investing in a beautiful city through signature art in favor of smaller, cheaper, grant-funded initiatives. Last year, when Hodges was running for mayor, she stated her public-art interest in “things we could do without money … things we can do inside the city’s work that won’t require as much resources for project A or project B.” She cited a piano placed during the summer in a Linden Hills pocket park.

The next three years, as Creative CityMaking artists are deployed in up to five city departments, ought to tell if the strategy has legs. More and more artists are being enlisted as “collaborators and consultants,” largely volunteers. And some are getting restless. In October, artist Chaun Webster resigned from his volunteer role on the initiative’s Artist Support Work Group — meant to explore how city government can boost the fortunes of local artists — by comparing it to “colonialists’ mining of raw minerals and exploitation of labor.” Artist D.A. Bullock resigned in solidarity a few hours later and encouraged others to follow. 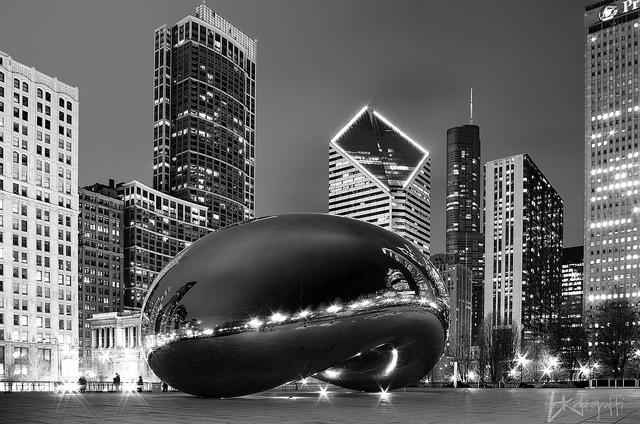 At some point, artists want to create art and get paid for it. They don’t want to be cogs in the system, or wielded as a tool. They want to make the Picasso in Daley Plaza. The bean. And we want to stand in front of it and put our picture on Instagram. It’s sometimes messy and politicized and you might get a call from Joe Soucheray, but ultimately no amount of facilitating through work groups and studies can replace a city’s commitment to putting its money where its art is.

Minneapolis has never formally committed. Its tradition of annual public-art spending (one to two percent of the net debt bond, for budget geeks) is referred to as just that: a tradition, not a rule. Which is why Hodges could zero it out.

That differs from many major cities, including St. Paul, where 1 percent of capital improvement costs goes to public art by ordinance, and another half percent to maintenance. Cementing that commitment might take some of the politics — and anxiety — out of public art. And it might actually help the city build the trust it needs to truly integrate art and design into civic planning. You can’t have art without the artists. That’s the rub, and the opportunity.

How Minneapolis got itself in a public-art pickle