Johnny Thunders is probably the biggest reason why I can’t stomach Garth Brooks.

Brooks, in town for a record-setting multinight stand at the Target Center, is by all reports a good guy, a hugely successful corporate partner and citizen, and a careful God-loving politician who plays to his all-American fan base with the same broad strokes brushed by Kentucky senator and likely minority leader Mitch McConnell, who on election night took to his victory podium accompanied by, incredibly enough, Toby Keith’s jingoistic anthem “Made in America” (which promptly catapulted me to John Prine’s “Your Flag Decal Won’t Get You Into Heaven Any More”).

Ugh, and sigh. “I wish I was like you/easily amused,” sang Kurt Cobain not long before he killed himself, summing up lo these many years later how it still feels to be “outside of society” per Patti Smith, and perpetually at odds with mainstream entertainment, inundated as we are by the sort of suffocating feel-goodery embodied by the likes of Garth, Cracker Barrel, strip malls, and all the other soul-sucking but easily understood and easily digested entities built for ultimate blandness and mass consumption.

Thankfully, there’s a so-called dark side to the human experience that artists like Thunders have been tapping into and expressing since the beginning of time, and we’re all the richer for it.

To be sure, a dumbed-down world that lambastes Bruce Springsteen for playing “Born in the U.S.A.” and “Fortunate Son” at a Veterans Day concert is to account for play-it-safe pabulum like Garth, the king of normcore and crowd-pleasing who will be yee-hawing it up at Target Center when Danny Garcia’s sadly beautiful “Looking for Johnny: The Legend of Johnny Thunders” makes its Minneapolis debut tonight (9:15) at the Trylon Microcinema as part of the 15th annual Sound Unseen movies and music festival. UPDATE: A second showing has been added; it will be at 9 p.m. Sunday, Nov. 16, at the Trylon.

Apples and oranges, perhaps, but I couldn’t get the week’s giddy Brooks coverage out of my head as I watched “Looking For Johnny,” knowing full well that Thunders and his bands – especially the trans-dressing New York Dolls – would’ve been booed off stage by the Garth faithful. It also probably says something about me, a normally pretty open-minded music lover who would rather sit in a dark room and watch the story of a junkie guitar player whose life ended pathetically in 1991 at age 38 than go see a live-and-in-person aw-shucks family man and savior of the recording industry, but there you go.

“Gimme danger,” sang Iggy Pop, who turned Thunders on to heroin, and make no mistake, danger or the suggestion of danger – not safety or comfort food – is what the best rock & roll has always flirted with, if not outright embraced. The artist’s journey and job has always been to go as far out as possible, then return with the mystical goods and share. Thunders did that every time he got high and wrote a song, every time he danced with “The Beast,” as Peter Perrett of the Only Ones dubbed heroin, and who appears briefly in “Looking for Johnny” as a latter-day Thunders co-conspirator who bore witness to the Sex Pistols’ Sid Vicious’ hero-worship of Johnny.

“[Heroin] helps me get through all the slush you gotta go through to get on stage, but it doesn’t help me write or perform,” said Thunders, who temporarily cleaned up at Hazelden in the ‘80s. “You can’t run a rock and roll band and be a drug addict.” 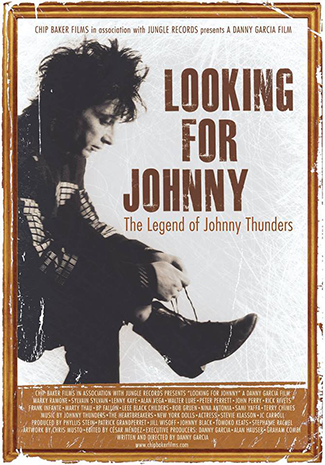 Music and hallucinogens have a long and stormy marriage, and Thunders remains one of the oeuvre’s patron saints; an angelic waiflike tough kid who loved the girl groups of the day, ’50s rock, and stimulants. The live footage of Thunders and his bands (Jerry and the Jaywalkers, the New York Dolls, the Heartbreakers, the Living Dead, Gang War) is electrifying, though the film itself occasionally falls as flat as Thunders’ dope-deadened eyes and gets weighed down by drug-addled rock clichés.

“He had a magnetic quality, he was passionate, he was intuitive,” Perrett and Thunders biographer Nina Antonia told Garcia of Thunders, while Dolls guitarist Sylvain Sylvain claimed Bob Dylan said he wished he’d written the Thunders classic, “You Can’t Put Your Arms Around a Memory.”

Most important, in terms of a lasting legacy and influence on today’s punk bands, “Looking for Johnny” makes the case that it was the simple tinny sound of Thunders’ guitar that launched the Dolls and a New York punk scene that spawned the Ramones, Television, Blondie, and Thunders’ first post-Dolls band The Heartbreakers.

“By the early ‘70s,” the Only Ones’ guitarist and writer John Perry told Garcia, “when John starts playing, those single pick-up Les Paul juniors with that P-90 pick-up, you could find one for $90 in a junk shop. It was an unfashionable instrument, with a really distinctive sound.”

“For me, that’s one of the best rock and roll guitars you can get,” said guitarist Steve Hooker. “It’s so simple, it’s one pick-up, tone and volume [knobs], wrap-around bridge, really easy to re-string and tune up.”

Perry: “You stick that through a Twin Reverb (amp) and you just turn everything up to 10, including the reverb, and you get this unholy noise, which is Thunders.”

The sound signaled a return to rock’s raw roots, and the beginning of an underground American rock scene that was seeded a few years earlier by the Velvet Underground and the Modern Lovers. “Somewhere in the early 70s,” Patti Smith guitarist and rock journalist/producer Lenny Kaye told Garcia, “I was working as a record clerk at Village Oldies on Bleecker Street, and I saw a sign on the wall and it said ‘The New York Dolls at the Mercer Street Arts Center.’ I love local bands, and though it’s hard to believe, at that time there was no local band scene.”

Like Will Hermes’ excellent “Love Goes to Buildings on Fire,” “Looking for Johnny” is a slice of New York City at one of its most fertile moments. At the heart of it is the glammy, drunken, drugged-out and debauched Dolls, about whom former Dolls manager and Sex Pistols mastermind Malcolm Mclaren told Garcia, “I never realized you could be so good at being bad, and that made me follow them.”

“So good at being bad.” That about sums up the appeal of Thunders, just as “Looking for Johnny” celebrates the importance of the very human antihero in a world gone Garth.

‘Looking for Johnny’ celebrates the antihero in a world gone Garth