Fourteen years later, it’s down to a handful of hangers-on — including singer/songwriters and recording artists Rich Mattson and Germaine Gemberling, who own the former church-turned-recording studio Sparta Sound, which is suddenly one of the few buildings in town left standing.

“Sparta was mostly built on mine property; they own the rights to the land, and they’re not renewing the leases to tenants,” said Mattson by phone, while building a fire to warm the house. “So everybody is moving out, trashing their houses on the way out and burning everything they don’t want to take with them. Fortunately, yes, we are staying. Our house and Sparta Sound is not on the leased land. But it’s been a wild ride for this little haven. From what I’ve heard, the premises must be vacated by March.”

Inspired by the sheer weirdness of the fast exodus, Mattson wrote and recorded a new song, “This Town (Ghost Town),” with his band the Northstars. While it’s not a political take on the area’s mining and environmental wars, the song does get at how corporations affect the land and its people:

“It’s not like they’re drilling for oil,” said Mattson, leader of beloved Minnesota bands Ol’ Yeller, the Tisdales, the Glenrustles, and, with Gemberling, Junkboat. “It’s open-pit mining, so it’s not as harmful to the environment as copper mining. They’re gonna start mining for precious metals up at Ely, and that’s kind of upsetting because it could really mess up the water and everything. The open-pit method is basically just digging up dirt, and after it’s all dug up they let it go back to nature but it’s all scarred.

“I don’t know if they plan to mine this neighborhood or what; my guess is that they’re not going to do anything with it for a long time. It’s just going to sit here. We’re close enough to the main road or something, and I guess where we’re at, maybe they found the vein of iron oar doesn’t come anywhere near our house. Most of the people that are moving out grew up here, and these are 60- and 70-year-old people. One day we walked around with a video camera through all these abandoned houses and took video. We’ll stitch ‘em all together for the song, eventually.”

Mattson grew up in West Eveleth and, after immersing himself in the Twin Cities music scene for a couple decades, moved to Sparta in 2005. Since opening Sparta Sound, he has recorded numerous timeless-sounding recordings with some of Minnesota’s best rock, folk, and alt-country musicians, including Gemberling, Martin Devaney, Jennifer Markey, Trampled By Turtles, the Belfast Cowboys, and Dan Israel. Many Twin Cities musicians make the trek up north, lured as they are by a creative solitude that’s about to get even quieter. 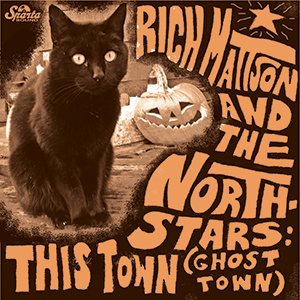 “It was really vibrant when I first moved here, there was a grocery store, a church, a skating rink. It’s just kind of wild to see everything going away before my eyes,” said Mattson. “The fire department burns down [abandoned] houses and puts ‘em out for training. They’ve dug up most of downtown Sparta, but there’s this old lady on the edge of town and she keeps up her lawn and garden and everything and she just seems oblivious to the whole thing. Right across the street from her, these people tore down their perfectly nice garage and house, because if they don’t tear it down they’ll get charged for it, and she’s just living her life just like nothing’s happening.

“It’s us and about four or five neighbors that are staying. On the other side of the railroad tracks, there’s Ely Lake and that’s part of Sparta, too. But Sparta’s gone, it’s history. It’s really not uncommon for people on the Iron Range to get uprooted and have to leave their homestead. A lot of these areas are leased land. Where I grew up, in West Eveleth, the neighboring town is Leonidas, and they had a school and everything — that’s where my mom went to grade school — and they kicked everybody out of there, too. I remember as crazy kids we’d run around in the abandoned school house; I’ve always had this fascination with abandoned buildings, and now it’s happening where I live, here in Sparta.”

The flipside to “This Town (Ghost Town),” is Gemberling’s “Points North,” an ode to the natural wonders of the Iron Range that she and Mattson won’t forsake anytime soon. While former neighbors flee, Mattson plans ski trails in their new big backyard, and Gemberling continues to write songs and sing to the great expanse.

“Living up here has been a very inspiring place to be, with all the natural surroundings of trees, rivers, lakes, and beyond,” said Gemberling, who grew up in the Twin Cities.

“[The song] is our tribute to the Iron Range and all the things going on here – not only the obvious things with the mining and all the political stuff, but just the beauty of the simple life and living where we do and drawing energy from the natural surroundings.

“We haven’t had TV in 17 years, and now I just don’t know when I’d have time for it, because we’re so busy. We have to walk the dog, go get firewood… I always say this, but I like who I am better up here. Taking a walk in the woods is my version of church.”