In the summer of 1984, there may have been no bigger Prince fan than Alan Light. That summer, Prince and “Purple Rain” were everywhere, and 18-year-old Light started keeping notes.

His “Let’s Go Crazy: Prince and the Making of ‘Purple Rain’ ” hit stores last month. A writer and editor at Rolling Stone, Vibe, Spin, and the New York Times, Light has penned biographies on the Beastie Boys, Tupac and Gregg Allman, as well as “The Holy or the Broken – Leonard Cohen, Jeff Buckley, and the Unlikely Ascension of ‘Hallelujah.’ ”

A few days before tonight’s Current-sponsored celebration of “Purple Rain” takes to the Fitzgerald Theater stage and screen, he spoke with MinnPost about a pop moment in history that still captures the imagination:

MinnPost: How did you become a Prince fan, and when did you first see “Purple Rain”?

Alan Light: It came out in the summer of 1984, which as it happens was the summer I graduated from high school in Cincinnati, so what was happening is super vivid in my head. My friends and I were already big fans and had gone to the “1999” tour and so we were really counting down when they were going to premiere the first single on the radio, and staying up ‘til midnight with the cassette tape recorder held up to the radio for the first time when they played “When Doves Cry,” and then counting down the days until the release of the soundtrack, and waiting in line for the premiere of the movie, and spending all that summer, really, immersed in going to the movie over and over, and then going to college [at Yale] and going to the movie again over and over with new friends. … You know, I don’t think there’s any record or music project that in real time meant as much to me as this one did: You discovered Dylan records or Beatles records after the fact, but in terms of actually living with it, this was probably as crucial as anything else that I can remember.

MP: How many times did you see it that first year?

MP: What was it about Prince that you as a high schooler discovered? What were you drawn to?

AL: It really was this sense that this was a crystallization of all the things that I liked, that we all liked – this rock & roll spirit and the band feel and guitar playing with the strongest funk rhythms and dance feel and super provocative words and images – all these things that you’d be fascinated with when you were 16, all in one place. In high school, you’re listening to all this stuff, James Brown and the Beatles, and here was this guy who sort of seemed to embody all of that — and then, as now, was better on a stage than anybody else alive.

MP: After seeing the film, what was your impression of where he came from, from afar? 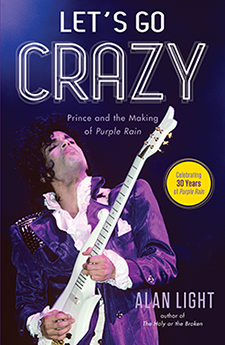 AL: I knew that Minneapolis was part of this story, and that it was this weird place. I was also in the Midwest, so I think I just thought of it as another city in this part of the country, but colder.  Other than the Twins and the Vikings, I didn’t have any sense about Minneapolis as a place.

But I think when you go back and look at “Purple Rain,” he didn’t do a single interview the entire cycle of “Purple Rain.” The last interview he did was for “1999,” with [the Los Angeles Times’ Robert] Hilburn, and he said, “That’s it, I’m never doing it again.” And he didn’t do another interview until “Around the World in a Day” came out.

So we were just fascinated by any scrap of anything, and that sense of, “How much of this is real life and is it his story?” We didn’t know anything. We knew it was where he was from, but we didn’t know if it was really like that in Minneapolis. It was totally mysterious, and I think that was really central to the whole fascination with it.

AL: I’m happy to say that when I came to Minneapolis last year to do interviews for the book, it was at the absolute worst moment of the Polar Vortex and I got to be there when the high was 16 below or something, and was very pleased that I got the full-on Minneapolis experience.

MP: From where you sat, what was the perception of Prince coming out of seemingly nowhere to conquer the music world?

AL: When I’d talk to friends, especially people who grew up in and around New York, there was a feeling that there was something sort of corny about him and his showmanship, and I guess because I grew up also with these Midwest clubs where you gotta go out and win a crowd, I related to that more and knew that, “No, you have to bring it.”

Every step was maximized, and it gave him the space where it didn’t feel stiff because he was always improvising on top of all that [choreography and rehearsal]. But I just think that that version of “Purple Rain,” the one everyone knows – it’s the first time they ever played it in public. It was the ’83 First Avenue show, [guitarist] Wendy [Melvoin]’s first show with the band, the first time they played “Purple Rain” in public, and they nail it so hard that “OK, that’s it. We have it.” That’s incredible.

MP: How many times did you watch it while writing the book, and what did you learn as a chronicler versus as a fan?

AL: I watched it probably half a dozen times and then going back to certain scenes throughout. The most interesting time I watched it was with Questlove, who taught a Prince class at NYU last semester and I went in and did stuff with him, and he screened it for his students, many of whom hadn’t seen the whole thing before. It’s an interesting experience to watch it with people who aren’t true believers, but who are young and interested and just watching it. And you can get hung up on these things, but most notably, obviously, the treatment of the women in the film, and some of the very casual misogyny in the film, and hearing people gasp at the scene where the woman yells at Morris [Day] and Jerome [Benton] picks her up and throws her in the dumpster – not seeing it as slapstick but as something horrifying to these kids. It makes you aware of how different the time was.

Nobody’s done anything like it since. The performances feel as new as if you shot them yesterday, but a lot of the world around it stuff is where you realize that it was 30 years ago, a long time ago.

MP: How much of a Prince fan and listener have you been in recent years?

AL: Always a fan, which is not to say that I love everything he does. But always interested and always pay attention, and try to consistently when there’s an excuse to write about him and report on him so I can stay plugged in to what he’s doing.

With “Purple Rain,” it was the first time anyone had a number one single, album, and movie simultaneously, and they go out on tour and take over the world and he abruptly cuts off the tour six months in. They don’t go overseas, they don’t go to Europe, and I think that moment is really interesting and sets up everything that follows.

He reached the mountaintop and he saw what that was, and he realized, “If I do this, now I’ve got to go play the same show for the next two years, and I can’t do it. I’ve already made the next record, I’m already thinking about what’s after that, I can’t work like that.” But the other side of that is, he wanted to make “Purple Rain” and everybody around him thought he was nuts. The band didn’t understand, the management didn’t understand; they did it because he told them to do it. And then he was right and everybody else was wrong, and it was the success that it was, and it became very difficult to say no to him.

So the last thirty years is, “Is this guy the biggest cult artist in the world, and has a million people who will follow him no matter what he does, or is he a pop star that plays halftime at the Super Bowl and arenas?” And you just see that seesaw over and over again.