Bertolt Brecht was Germany’s most famous poet and playwright, credited with penning some of the theater world’s most oft-produced scripts, including “The Threepenny Opera,” “Life of Galileo,” “Mother Courage and Her Children,” and “The Caucasian Chalk Circle.”

“Rehearsing Failure,” a new play mounted by the 15-year-old Minneapolis-based independent company Novi Most this month at the Southern Theater, asks that question via the stories of the three women behind Brecht (played by Pearce Bunting) – his wife, Helene Weigel (Barbra Berlovitz), and two of his former lovers, writer Elisabeth Hauptmann (Annie Enneking) and director Ruth Berlau (Sara Richardson).

“Brecht was obviously a major figure in 20th-century theater, but he didn’t work alone at all,” explained Novi Most founder and director Lisa Channer, who co-wrote “Rehearsing Failure” with playwright Cory Hinkle with a lot of help from the company and Enneking and Dan Bonespur’s original score. “He worked always with a lot of people, who were probably equally as involved as he was, but it all lived under the name Brecht, and that was partly due to expediency or economic reasons, but that’s also how he wrote.

“You often hear, ‘Behind every great man there’s all these great women,’ but in his case it’s really true. These women were profoundly bright, profoundly skilled, profoundly talented, and then really uncredited. The scholarship on that is just coming out now, and we’re understanding the depths to which some of them should have been credited.” 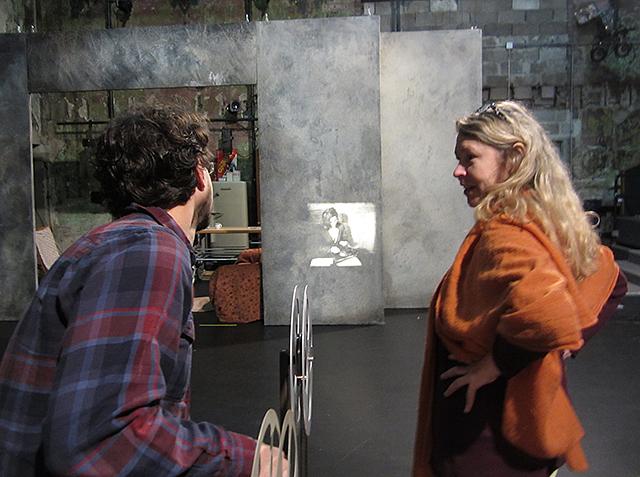 The promotional material for “Rehearsing Failure” says it “borrows from Brecht’s own playbook – it’s a play that reaches back into history to examine contemporary themes of politics, sex and complicity and asks the question: What do you need to survive, as an artist and a person, and what are you willing to sacrifice?”

That question has been on the mind of all concerned, including Berlovitz, who said at a tech rehearsal earlier this week, “Creating anything is next to impossible. It’s really hard, and everybody has their own difficulties and frustrations with it. I’ve had my own struggles with it. How do get your ideas out? How do you feel an equal partner in something that you feel is an equal situation?”

“Rehearsing Failure” takes place in the summer of 1947, with Brecht and his women, the lot of whom fled Nazi Germany and moved to Hollywood during World War II, living together commune-style and rehearsing “The Life of Galileo” before the playwright’s testimony before the House Committee on Un-American Activities during the McCarthy hearings.

“There’s a lot about what it means to live with integrity,” said Channer, “and about how to live your morals and values, and Brecht didn’t always live by the morals and values he preached. He contradicted himself a lot, which we all do.” 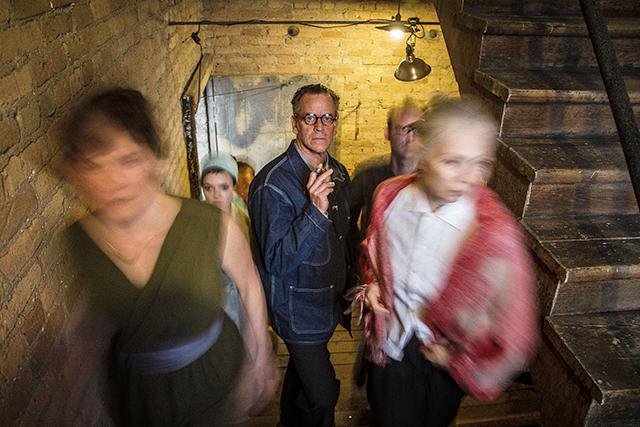 “When I started reading about Brecht, and all these relationships he had with these women, what I really got into was these really dark, sexy, weird, [messed]-up relationships that hopefully come out in a lot of the scenes,” said Hinkle. “I mean, the scenes that I wrote for the play, there’s the political backdrop, but they’re really about how these people worked together, how they lived together, how they collaborated.

“These women ran his life for him. I think he was just one of those guys who couldn’t have done it alone, and he never would have wanted to do it alone. Helene Weigel ran Brecht’s life like a business. I think Ruth and Helene were definitely muses, and I think he had a different relationship with Elisabeth, because Elisabeth was such an intellectual and they had a sexual relationship when he was very young into most of their adult lives.”

“Cody wrote it in collaboration with us,” said Berlovitz, “and we all come in and out of the play, and it’s so much about being human, and about relationships and about, how do you negotiate relationships with other people in an honest way, in an open way?”

The play’s musical score was penned by Bonespur and Enneking, leader of local rockers Annie and the Bang Bang. “We do a version of Brecht’s “Baal,” which David Bowie did, and I really believe ours is better,” said Bonespur, to nods all around at tech rehearsal.

One of the production’s highlights is a Sleater-Kinney-worthy tune delivered by a trash-can-pounding Richardson; a raw-throated Enneking, and Berlovitz, a musical vet who straps on the electric bass for the first time in her life for “Rehearsing Failure.”

“There are [Brecht] lyrics that are present in the play, there’s a poem that we translate, and then there’s a lot of original material,” said Enneking. “The way that he used music is in the middle of the play a song happens and the singers sing to the audience. It’s really a direct address, and the songs become commentary. There’s a rock song in the piece, and it comes after [the women] have all had their own conflicts with him and it all busts out in this rock song.”

“I think it makes you want to know more about this history after you leave, and about this female-male dynamic not only in art-making but in general,” said Hinkle. “Brecht wanted his audience to think, and to not only leave the theater moved, but thinking about an issue. Hopefully it makes you think, because I know I’m more open to thinking about an issue if I’m moved and entertained and blown away by some visuals and music.”

In the end, what does a play about a long-dead Marxist icon and playwright living, creating, and loving in post-war exile have to say to artists and theatergoers today? Plenty.

“If you go across the country, you’ll find that 24 percent of plays right now are being directed by women, when women are making up a good 70 percent of the graduates of the major directing programs and have been for decades,” said Channer. “And for women playwrights, it’s equally dire, if not worse. When you get to commercial theater, where money’s being made, it’s 7 percent.

“This is a huge conversation in the American theater, and even internationally. The Guthrie did a season two years ago that was all white men playwrights … and it got a lot of attention all over the world. So that’s a conversation that’s been ongoing: Why is this happening?

“Collaboration and credit in the publishing business insists on a single name, even though works are often done collectively. In Brecht’s case, it’s rather famous and was talked about for years in hushed tones though everybody knew. Now it’s being talked about a little bit more loudly, and that’s what our play is about.”

‘Rehearsing Failure’ shines a light on the women behind Bertolt Brecht