When David Carr came to bury his cousin Tim Carr at St. John The Evangelist church in Hopkins in the spring of 2013, the eulogizing priest noted that, “The Irish have a phrase for how Tim died: He went ‘out of turn,’ meaning too soon, too young.” That memory — and of David sitting in a church pew surrounded by family and scanning the hushed grief-stricken faces for meaning amidst the big mystery that is sudden death – is what first came to mind when news hit that the former Twin Cities Reader writer and editor and New York Times columnist died February 12 at the out-of-turn age of 58.

In the week since his death, Carr has been eulogized and mythologized by friends near and far, from his first journalism running buddy, David Brauer, and his first editor, Brian Lambert, to colleagues and sources worldwide, including Portlandia co-star and Sleater-Kinney singer/guitarist Carrie Brownstein, who commented from the First Avenue stage Saturday night, “We love Minneapolis because it was the hometown of the great journalist David Carr, who passed away this week. I had many fascinating conversations with that man. Thank you, Minneapolis, for giving us such a force in journalism and culture.”

Incredibly to anyone who worked and/or partied hard with Carr, his funeral took place Tuesday at the Church of St. Ignatius Loyola on the Upper East Side of Manhattan, which has hosted funerals for the likes of Jacqueline Kennedy Onassis, Lena Horne, Oscar de la Renta, and Mario Cuomo.

Thursday night in Minneapolis, about a hundred of Carr’s closest personal friends gathered at a church slightly more befitting the guest of honor, Liquor Lyle’s in Uptown, for the Lambert-hosted “Irish Wake For David Carr,” which consisted of an extremely rowdy if sorrowful bunch of ink-stained wretches, drinking and telling stories about one of the most voracious gone-not-gone spirits the Twin Cities has ever known. 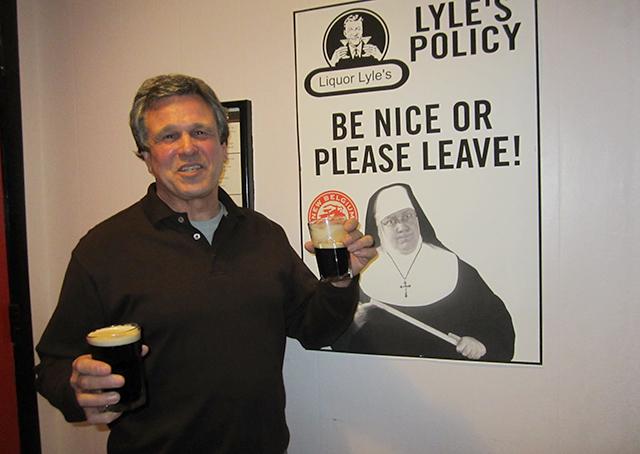 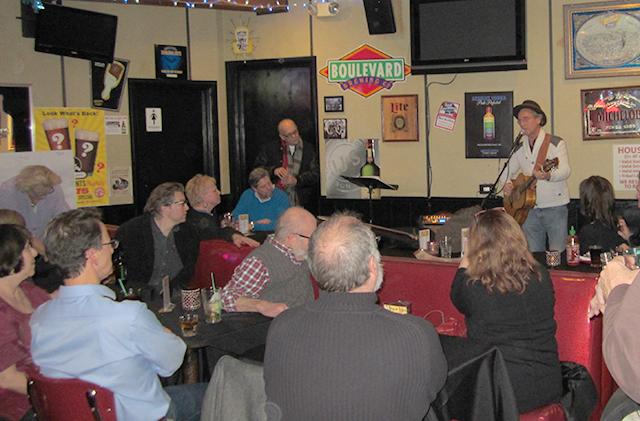 “The overwhelming theme was a life well-lived,” Carr’s brother Joe told the Lyle’s crowd about the funeral services in New York for David, whom Joe said blanched at being called “Davey” and once asked his big brother to instead “call me ‘sweetheart.’” “It was a resurrection, if you will, from the bad-ass coke-snortin’ Hunter S. Thompson journalist he was here in Minnesota to the New York media big shot he turned into. The family who knew David, who loved him, had no idea of his impact, and the coolest thing is finding out about the people he mentored and helped along.”

“He died with his boots on,” said Carr’s old friend Paul Metsa, who, along with Nate Dungan, Larry Long, and John Fenner played tunes for their departed pal. The six-hour gathering proved to be something of a family reunion for members of the alt-weekly wars of the ‘80s and ‘90s, when City Pages and the Twin Cities Reader were the main games in town for non-mainstream journalism.

Lyle’s was a favorite haunt and breakfast spot for Carr and his old friend Eddie Nagel, and hell if the old watchdog’s spirit didn’t fill the joint in his absentia, packed out as it was with the likes of such Minnesota-bred journalists as Susan Hamre, Martin Keller, Emily Kaiser, Keith Goetzman, Kevyn Burger, Rick Shefchik, Jim Leinfelder, Bridgette Reinsmoen, Tommy Mischke, Sara Janacek, P.D. Larson, Jim Meyer, Britt Robson, Neal Karlen, and many more, near and far. More memories:

Jennifer Jones: “I worked with David at the Reader and when he had one of his birthday parties at McCready’s, he had these [t-shirts] printed. If you went you got one. I babysat for him when I was in college, and he always encouraged me to pursue [journalism]. He taught me a lot.” 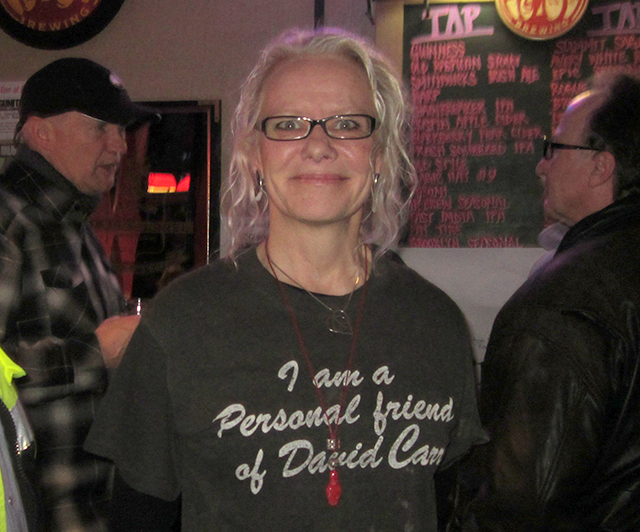 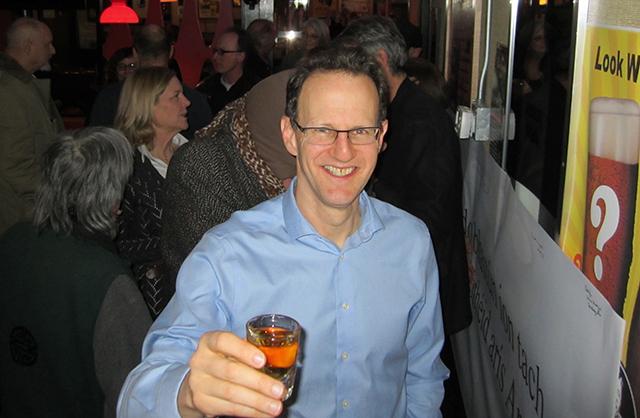 David Brauer: “I knew him when he had a lot of rough edges, and it’s been such a pleasure to read the remembrances from all the people from the East Coast side of the family and how positive and loving and how deeply touched they all were, and they saw the David where a lot of the thorns had fallen away. And I just think about that redemption, and how we all want that, right? We want our best selves to emerge, however it emerges, and it really sounds like that happened with David and it hit deep in my heart and healed some of the wounds.”

John Fenner: “I knew David when he was at his worst and I was at my worst. We were goddamn drug addicts and users and it was a horrible, horrible life and I’m not happy I lived it and I’m not proud of myself. David Carr and Emily Carter wrote those drug memoirs, and they’re wonderful wonderful people. When they say there are no second acts, that’s a lie. Mr. Carr had a beautiful second act, he made his mama proud.” 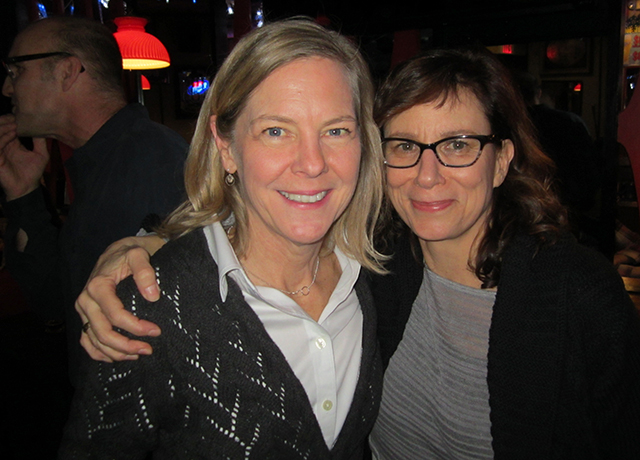 Teri Mach and Connie Nelson: “I was a cub reporter,” said Nelson, “and he took me out one night and said, ‘I’m gonna show you the town and I’m gonna show you how to do this.’ And I grabbed onto the back of his coat and 12 hours later I knew everything there was to know about Minneapolis, David’s Minneapolis.”

“I was an intern at the Reader, I had just graduated from St. Thomas and David was this larger-than-life guy but also really present and right there,” said Mach. “I had to interview a judge in Ramsey County, it was a personality profile and a cover story, way beyond anything I’d done. I remember David sitting down with me, word by word, a couple of trips to Moby’s, two packs of cigarettes, and rebuilding this thing and making it worthy of being published. What a ridiculously generous man.” 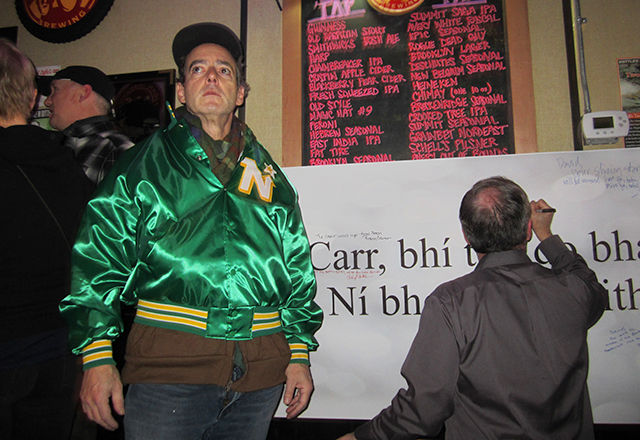 Neal Karlen: “I’ve had editors at the New York Times who I’ve known for 15 years who if you get five yards away from their cubicle they freak out. I went there and he showed me all around the place, and he barely knew me. The Times is filled with guys and women who are the people who get As in sixth grade and don’t share, and there are only three Pulitzer Prizes so everyone hates each other, but everyone loved him.” 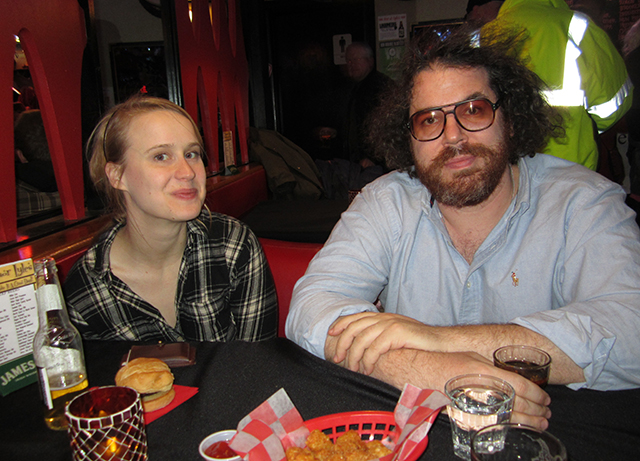 Hannah Sayle, managing editor at City Pages, and writer Steve Marsh: “I’m most impressed by the idea that he was such a straight shooter,” said Sayle. “If he was going to do something that was even mildly going to come off as a ‘hit piece,’ he’d call you up and let you know. And I just think that’s the honorable way to go; he was as honest as anyone could be and in this profession and that says a lot.”

“He was my hero,” said Marsh. “He f—ed up and came from here and wrote beautifully for all kinds of people. Sometimes in Minneapolis when you’re feeling down about yourself, whether you’re in between jobs or it’s not going how you’d like it to go or you have a new boss or a new editor or whatever it is, that was a guy who was in a worse hole than you were in and came out of it and blew up.”

I had the honor of introducing Carr and conducting the Q&A at his reading for “Night Of The Gun” at Magers & Quinn in 2008. It was a jubilant night given the drugs-to-riches story the book so rawly chronicles, and near the end of the program before we all headed for a post-gig cocktail, I asked Carr what kept him going, what kept him inspired.

“I’d disappear if I wasn’t typing,” he said, simply.

Lucky for the rest of us, David Carr hasn’t disappeared, but his words and archives live on. Whether it was in conversation, or in the pages of the New York Times, or in his wonderfully personal “Because I Said So” parenting column in Family Times, Carr’s enthusiasm for life, music, people, stories, and journalism was and remains inspiring. For all the journalists gathered at Lyle’s Thursday night and beyond, it’s heartening to think that his eagle eye will be looking over our shoulders from here on out, lending a pat on the back and a kick in the butt as only he could. 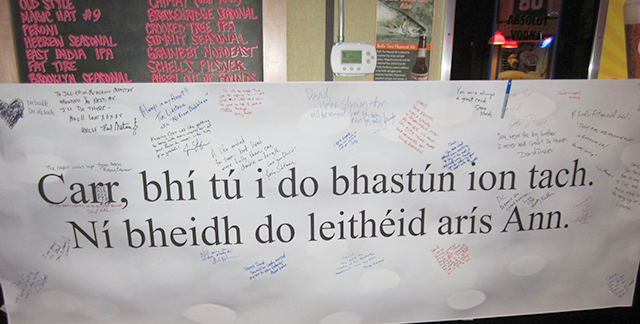