Last month at the Dakota jazz club, yours truly was forced to shush four chatty tables who were obviously unaware that a set of sublime acoustic music was taking place a mere 80 feet away from them in one of the best listening rooms in the world. My plea for quiet, delivered to a partying group of oblivious 20-something loudmouths with my best crazed dad/youth-sports coach glare and followed with a quick bow of thanks and “Namaste,” elicited kudos from a few bar-goers and staff alike – a heartening development in my lifelong mission to actually hear live music above the din of conversation.

Also heartening is the fact that there are still music lovers and listeners out there like Jim Vick, whose vision as booker/manager of Papa Charlie’s has made the chalet at the foot of Lutsen Mountain a model for all other clubs looking to create and cultivate a true listening scene.

“We designed it based on music clubs I’d been to; shallow shaped balcony with good viewpoints, kind of like the Fine Line and First Ave., and it needs to function as a bar and restaurant,” said Vick. “But when we do it as a music room, 500 people can be in the room and see and be part of the show. It was actually put together with that in mind.

“It started in 1996, just with Saturday nights, first show was the Jayhawks.

I’d known [late legendary concert promoter] Sue McLean; she loved to ski. I called her and traded her lift tickets for advice and she was able to connect us with the Jayhawks, a national touring act, and it was huge.”

Since then, Papa Charlie’s has became a dance and big band-fueled music club on the weekends, featuring high-octane acts like the Suburbs, the New Standards, Leftover Salmon, the Gear Daddies, the Honeydogs, Trampled By Turtles, the Big Wu, Presidents Of The United States of America, Iffy, G.B. Leighton, and Wookiefoot, who recently celebrated 10 years of hosting the club’s multinight Snowball festival.

As a rockin’ romantic getaway, it’s hard to beat – for bands and music fans alike. The combination of skiing, music, middle-of-nowhere nature, a hot tub, pool, sauna, and good bar food make for an environment that is, as Vick puts it, “the best week of the year for most of our guests.” But in the last four years, the weekend rock shows and dance nights have given way to Papa Charlie’s Monday and Wednesday night Songwriter Series, and Vick’s vision of the club as a world-class listening room has become a reality. 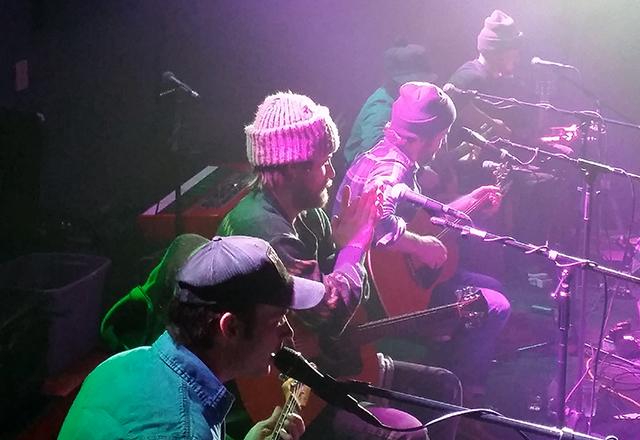 “It took a while for people to get used to it, but we’ve trained audiences and the staff, and now it’s just expected,” he said. “The reality behind it all is that there is a different experience between going out to a place that has music and listening to music. We’ve discovered that people don’t want to be in this room when there’s this music club scene, but they would come to a concert.

“We started casually talking about it, and then we learned if we put out fliers that reminded people, ‘quiet, please,’ the room would stay quiet. I was counting on my staff to do all this, with me there hosting, and the staff was reluctant because they felt like anytime they told people to be quiet, they’d lose guests. But we quickly learned that if we didn’t do that, there’d be only a dozen people in the room, and now there’s 40, or 200, and people are coming specifically for it.

“Now we put it out there with the calendar listings and promotional material: “This is a listening room.” So we started presenting everything about it that way, and it worked. I have folks who come specifically to listen.”

A great listening room is a marriage between sound system and vibe. It’s not a church, or a theater, or a studio; it retains a lived-in atmosphere where memorable sounds and stories have happened in the past, with a promise of more to come. Along with the Dakota, the Twin Cities is home to several fine clubs-slash-listening rooms, including the Cedar Cultural Center, the New Century Theater, the Aster Café and it’s River Room, Icehouse, Harriet Brewing, the Amsterdam Hall and Bar, the Fine Line and First Avenue. 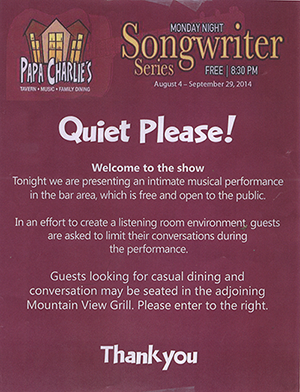 But in a noisy and competitive world in which too many clubs try to make money off food and booze first, and provide a stellar music listening experience second, Papa Charlie’s is a reminder of what can happen when the club takes control of the environment. To be sure, an intimacy takes hold when the performer isn’t distracted by the sound of people blabbing a few feet away, as can so often be the case with live acoustic music in this town.

“If people are talking over the music, we’d rather have them leave,” said Jerry LaVigne, who has been running sound at Papa Charlie’s since the beginning and has missed just one gig in 12 years – for his son’s wedding. “We might be losing 20 dollars worth of drinks, but we’re gaining people who really want to come there all the time and listen and have it be a neat scene. And Jim is all about the scene, he’s all about trying to make something, and he’s doing a good job at it.”

“It works, and as soon as you get critical mass, as soon as 80 percent of the room is listening, it becomes more obvious to everybody that that’s the deal,” said Vick. “Just last week we did a songwriter circle with Dead Man Winter and the Pines and Erik Koskinen, and there was this one gal whose voice just carries across the room, and I finally just went over to her and slowly led her up to the front of the room, where she got completely absorbed into the music and in the end she was thankful.

“You keep trying, and when it’s working it’s great and the room sounds great and that in turn goes to who I can bring in. I have a wait list for Monday nights now, because we’ve built a reputation amongst the artists that this room plays differently than any other place they play. Which goes to the future vision of when, someday when the rest of the world understands what’s going on, Mondays and Wednesdays are the times to be here.”

“In Cook County, there’s a bunch of super quality musicians who just love their music,” said LaVigne. “They’re more folk and bluegrass musicians and they love coming on Monday and Wednesday nights and not having their ears bleed. Jim’s been looking for that for a while, and it’s working pretty well. It’s advertised as a listening room, and with singer/songwriters there’s usually a story with every song, and I think people are interested in listening to that, and getting to know the songwriters.” 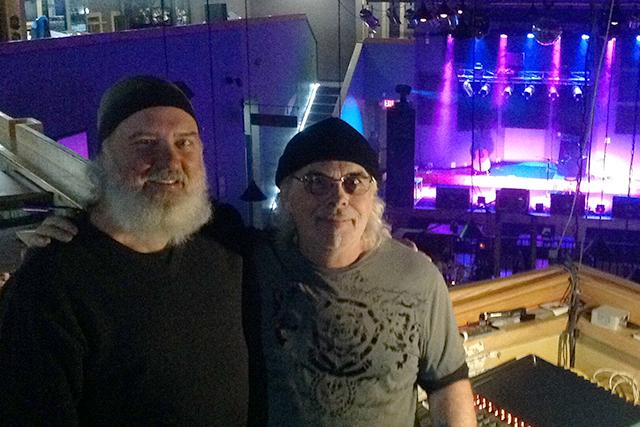 “There have been times when the room is just so dead quiet we have to put signs on the bathroom blow dryers, telling people not to use them and we put paper towels out instead,” said LaVigne. “That’s how quiet it can be. There’s no drinks made with blenders or firing up anything. We bring the lights down to nothing, and if you’re talking, you’re made to feel like you shouldn’t be talking.”

Which could come off as precious or annoying to free-thinking music lovers who are used to blabbing whenever and wherever they want, but slowly and surely Vick and LaVigne have seen the fruits of their labors.

“I have a cadre of very staunch supporters that love what I do,” said Vick, a singer and guitarist who occasionally takes to the Papa Charlie’s stage. “At the end of every show they say, ‘How can we get more people?’ And I say, ‘Well, you have to invite them.’ It’s not that they don’t know, it’s that they don’t understand what it is and they aren’t patterned into doing it. We dance on the weekends, but on Mondays and Wednesdays it’s the smaller intimate thing, and that’s the best. That’s what gets really personal and has a much deeper meaning to it.”