Everybody’s in show biz these days, what with the 24/7 news cycle and our Facebook/Twitter/Instagram/Vine/Snapchat selves adding to the “we live in public”  ways of how we live and work nowadays. Self-promotion and self-everything has become part of the art itself, with new communication technologies allowing everyone and their finger-painting kid to promote ideas, lives, food, shows, artwork, and images with just a few keystrokes.

“Adapt or die” was the conclusion Thursday evening at Walker Art Center, in a fascinating Mn Artists-sponsored panel discussion called “Upload, Then What?,” which explored how the panelists – advertising branding guru David Schwen, video and cable TV provocateur Chris Cloud, and musician/reality video performance artist Ana Voog  — use the communication technology of the day to distribute their work. 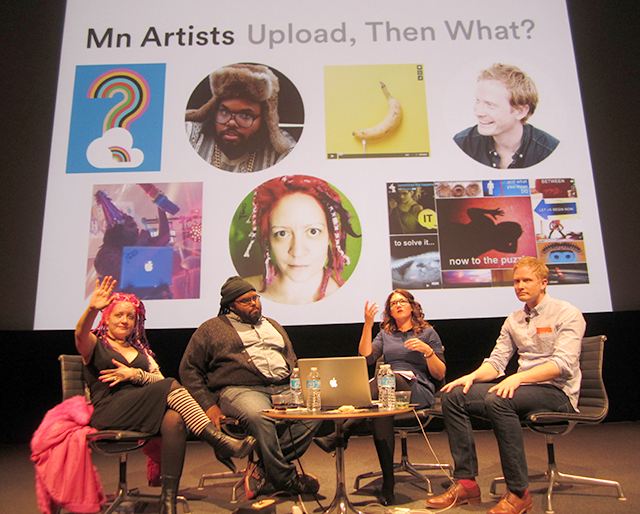 Expertly and eruditely moderated by Mn Artists’ Jehra Patrick,  the panel discussion was part of Mn Artists’ “4 x Forum” series, which seeks to bring experts “together for issue-specific, moderated dialogues… geared toward taking some of our cultural scene’s most intriguing, hot-button conversations offline and in-person.”

To that end, with their vast experience in trend-surfing, Schwen and Cloud had much to offer, while Voog’s over-indulgence in the pre-gig wine made for a somewhat amusing if ignorable artist-at-work-and-play sideshow, but didn’t add much to the conversation about fast-moving communication trends and creativity. Which is a shame, since Voog’s pioneering experience of broadcasting her life to the world from her Loring Park apartment across the street from the Walker could have been illuminating when juxtaposed with the other artists’ experiences. 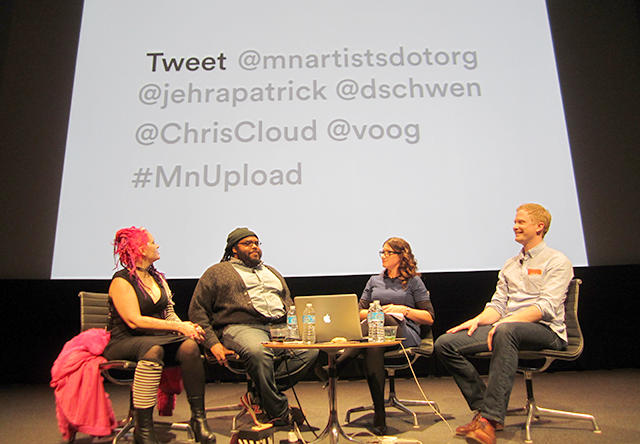 Patrick started off the discussion with a quote from Lauren Christiansen’s “Redefining Exhibition in the Digital Age” that said it all about the night’s fare — and the wild new world we traverse hourly: “With today’s burgeoning potential for digital mass viewership, transmissions become just as important as creations.”

That much was agreed upon by the panelists, who told tales of making and circulating their art, building audiences, and developing professional and creative persona. Schwen’s approach is to make things for himself first and foremost and constantly, without a specific client in mind, blast his creations out on Instagram, and see if it sticks. For a story in Wired magazine about balancing social media time, he made a yin-yang sign of the Twitter bird. His simple and stylish Pantone mustard and ketchup squares were seen and picked up by McDonald’s, with the end result and process itself suggesting an updating of Andy Warhol’s Brillo soap boxes for the digital age. 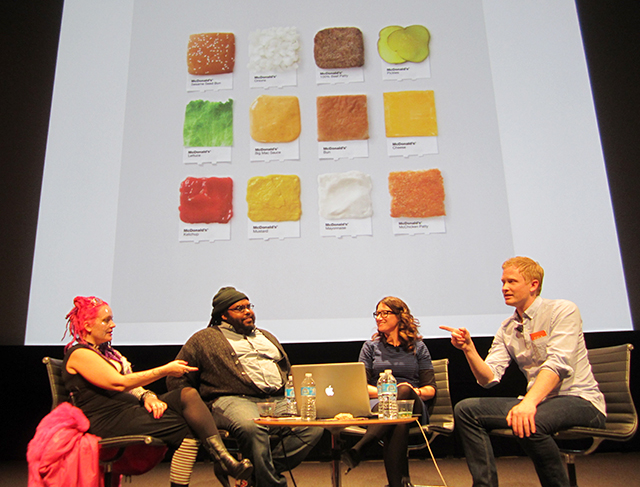 “It’s interesting, because I feel like more clients are coming to me because of the Instagrams and social media instead of a traditional website, and I think that’s a really interesting age to be in because when I graduated from college, there was no Instagram or social media and you had to post things on your website and meet actual people. It just opens so many more doors,” said Schwen.

While working a full-time job at an advertising agency, Cloud and a friend launched MPLS.TV  a few years ago, the popularity of which has been achieved solely by not network or even cable television, but distribution via social media. Recently Cloud and his partner in collaboration Lea Devon Sorrentino launched Negative Jam, a truly forward-pushing and often hilarious attempt “to understand the changing climate of American culture in a digital age and to determine if ‘the struggle’ (between online and offline) is real.”

To that end, the duo also recently launched the terrific podcast “Last Month On The Internet,” a wry look at the memes, videos, and moments that blow by us and forgotten forever – by everyone but our trusty curators Cloud and Sorrentino.

“That’s the whole point of it,” said Cloud. “We take offline what happens on the Internet so people can always have…”

“They can always have the Internet,” said Patrick. 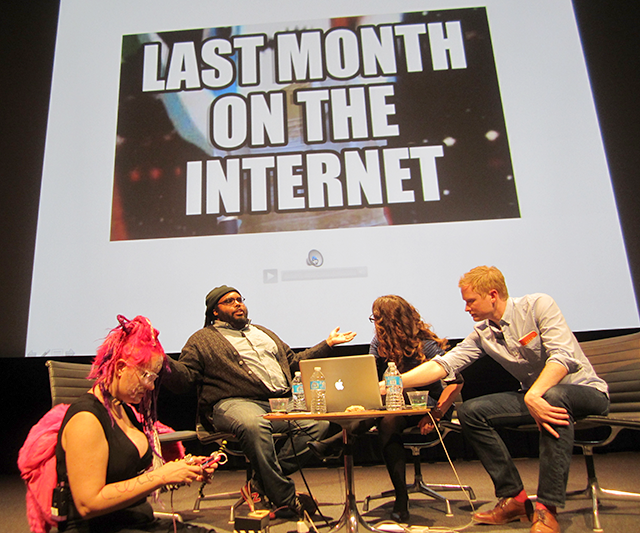 None of which would matter if the artists weren’t so good at what they do. Point being, if the content is great, it gets picked up or noticed and the artist gets paid – critically and financially.

“I’m making stuff that I just love making,” said Schwen. “It’s something that brings me a lot of joy and I’m happy to share it. Some people are going to love it or hate it, but you’re just throwing it out there because you want to keep creating things, whether it reaches an audience or not. We’re making this stuff for ourselves, and people might not get it. Sometimes I post something and it doesn’t get a lot of ‘likes’ or comments, but I’m still happy with it and people might not know about it but it’s something you love making.”

“I have a strong view on sparkling water,” responded Cloud. “I know I might get quoted on this and it might come back to bite me in the ass, but I feel like sparkling water is a really big thing with Caucasian people. My buddy, who is black, posted this La Croix article from the New York Times and I was like, ‘Yo dog, that’s just not right because black people don’t like sparkling water.’ And he’s like, ‘bra, no, that’s not cool,’ and so I posted something about La Croix water and asked what people’s favorite flavor was and it got all these responses.

“But then I’ll post a podcast that I’ve been working on and it gets like two ‘likes.’ So sometimes it’s tough to see your work not get ‘likes’ but at the same time we’re going to keep doing it, we’re going to keep making it because we love it. You have to do stuff for the passion, not for the ‘likes.’” 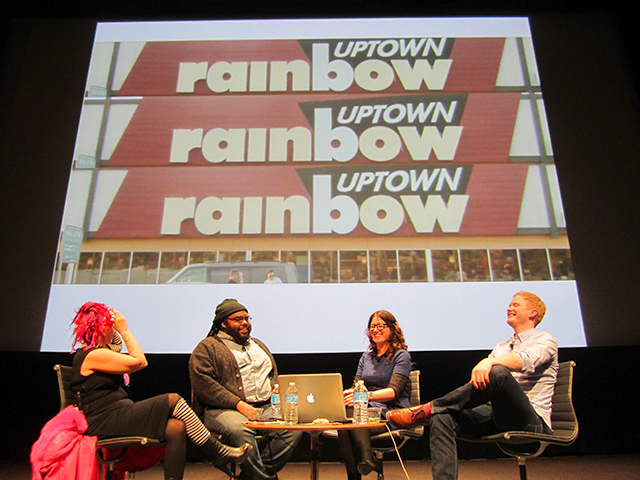 “What matters more is build yourself around a hashtag, or a very good mobile site, responsive sites,” said Cloud. “It bothers me so much when I go to artists’ websites on my phone and it’s really garbage. You’re an artist, represent yourself well. If you’re an artist, you should be embracing tools and new technologies and reading Mashable for a good flow of social things. It’s also important to experiment. You have to try things out.” 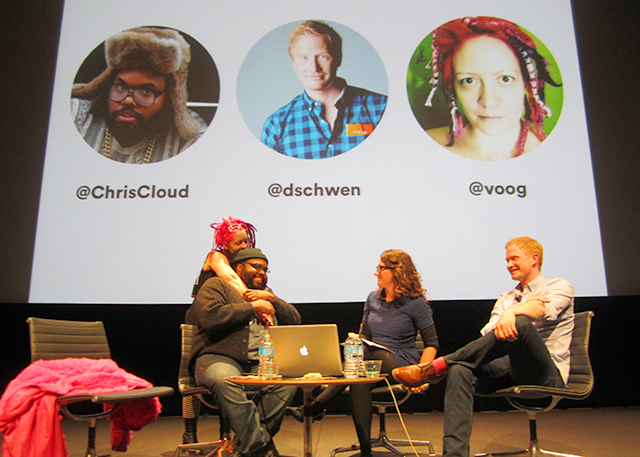 Talking art and social media at the Walker Art Center