“I’m 69. What’s happening to me with this play, with the feeling I’m getting and the strokes, has been the highlight of my life.”

So said Joe Minjares Friday afternoon, sitting in Pepito’s, the Mexican restaurant, theater and community hub he has owned and run with his family in South Minneapolis for over 40 years. These days, the father of five, grandfather of 11, and great-grandfather of five is riding high on the debut of his new play, “River Road Boogie: The Augie Garcia Story,” which has received rave reviews and is playing to full houses (through May 31) at the History Theater in St. Paul.

Prior to telling the story of St. Paul’s all-but forgotten rock & roll pioneer Garcia, who died of throat cancer in 1999, Minjares has had an off-and-on career as a stand-up comic and Hollywood movie actor. His first forays into playwriting came with “King of the Kosher Grocers” and “Minniecanos,” but it’s “River Road Boogie” – named for the Mendota club the River Road, which the Augie Garcia Quintet regularly lit up in the ‘50s – that has Minjares currently feeling the creative spark.

“My last big play that I consider successful was ‘The King of the Kosher Grocers,’ and that was 20 years ago, so that means my next successful play, I’ll be like 92 years old,” cracked Minjares as he settled in to talk with MinnPost about himself, Garcia and the Mexican-American neighborhoods of St. Paul’s West Side Flats, and more.

MinnPost: What is your personal history with Augie? When did you first hear him?

Joe Minjares: I first heard Augie when I was about 10 years old, when I heard his song on the radio. “Hi Yo Silver.”

Everybody was singing it. That was 1954. I never saw him play. Growing up, I heard about him all the time. I was living in North Minneapolis, and that was an interesting time. I fell in love with rock and roll when I was about 8 years old when I saw “Blackboard Jungle” at the theater on Nicollet there that’s now the Music Box Theater. I went in there and “Rock Around the Clock” was the theme song, and I can just remember going ape over that – walking up the aisles and dancing. We would go down to Mexico, and rock and roll was so new, and I remember the little Mexican kids saying, “Do you like rock & roll?” I would say, “Yeah, it’s the most.”

MP: How much connection did you feel to him and the music, and the Mexican-American bent he brought to it? There weren’t many Hispanic rockers at the time?

JM: Growing up in North Minneapolis, we knew about the Westside and Augie and my aunts would go to see him. And there were a few — Rodriguez, a folk-rock singer in Detroit, and no one heard of him until “Searching for Sugarman.” There was Sam the Sham and the Pharaohs; there was Richie Valens, and quite a few Latino artists. Trini Lopez came along in the late ’50s and ’60s, but I think the Latin name kept them down. I think that was a little barrier for them. The same holds for the movies back then, too.

The Westside was like going to the old country for us. Most of the Mexican community in Minneapolis lived on the Northside of Minneapolis, and there was maybe 200, 250 of us. And we’d go to the Westside to get Mexican products.

MP: How did you come to research Augie’s story and write the play?

JM: About two years ago, I got a call from [artistic director] Ron Peluso from the History Theater, and he asked me if I would be interested in writing a play for them about Augie Garcia and I said, “Let’s talk about it.” I had an interview with him, and with Augie’s family, and I have to admit I got a little bit intimidated. Because I knew this gigantic Westside family had certain expectations. I had a lot of responsibility: He’s considered the godfather of Minnesota rock & roll, and there’s still a lot of the community over there who remember him and who knew him. 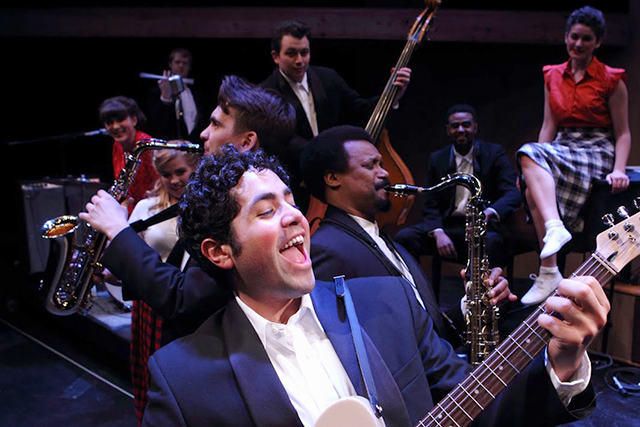 So I backed out, and told Ron and then I thought, “You know what, Joe? Just give it a shot.” So I called him back. I’ve always lacked self-confidence. People tell me I’m an achiever, but I’ve never been able to own that. Without tooting my own horn, I’ve accomplished some things that I don’t believe I did.

MP: You and Augie share a lot – similar backgrounds and a flair for show business.

JM: Right. Our families got here the same way, working the migrant streams, and my grandmother even came from the same part of Mexico as his mother. His family settled in St. Paul in the late ’20s, and my family settled in Minneapolis in the late ’20s. They went through really hard times, and my family went through really hard times; there were deportations, and right after the Depression hit, they were grabbing U.S. citizens off the street and sending them back to Mexico. Both families loved music.

MP: You interviewed people like Cornbread Harris, who played piano for Augie, and others. What stories did you hear and what did you learn that you didn’t know going in?

JM: He had a jump-blues band before he went into [the Korean War] called the Continentals. And he had a small three-piece combo that played Mexican music. He’d been on stage since he was a young guy. I wanted the play to be a deeper look into the man, and after meeting his family and his war buddy, this theme about this special guy started to grow out of this research.

He touched lives in a way that … there had to be a reason why he was so magnetic on stage. What was it about him that people dug so much? They say you can’t teach stage presence and charisma, and from my experience, people who have that — there’s something else in them. Whether it’s born of tragedy or of privilege, there’s a reason behind that presence. And with Augie, I wanted to know what that was and I found out a lot of it was born of poverty, and born of pride, and this fierce determination to drive forward after seeing his best friends die in Korea. 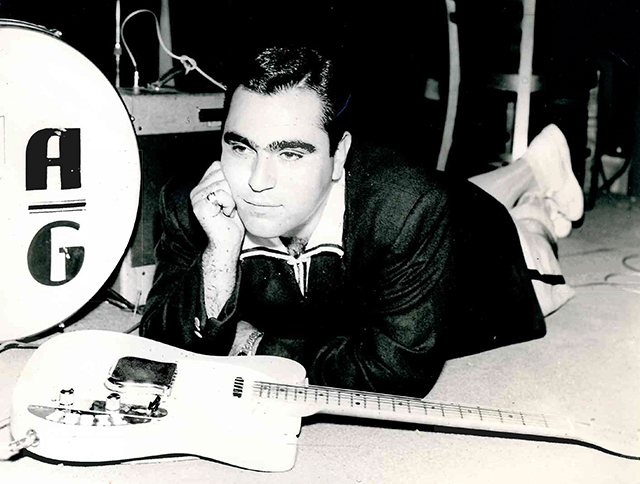 I spent a day with Cornbread, and I wanted to know about the River Room club, which was a hub of energy, and this early nucleus of rock & roll energy. He said they got paid really well and they were riding high on the hog. I met a guy named Joe Leon, who was his war buddy. He said, “I don’t know when I met him. One day he was just there. There was this guy who looked like an alien dropped from outer space, and we all just watched him. He had his own walk, his own talk, his own way about him. He was a freak, and before long we started to talk like him, we started to walk like him, everybody wanted to be like him, and to be his friend. And at night, he’d take out that guitar and we’d drink our beer rations and guys would play drums on anything they could get their hands on and we would sing. We forgot about some really ugly things.”

To me, that’s the heart of the story. It’s about this guy who affected people in the River Room club, and in this horrible situation in Korea that would’ve really blown most men. And when he met Cornbread Harris, Cornbread really brought the rhythm and R&B to the band and Augie brought the Mexican to it. They recorded, and got very popular and broke down a lot of barriers and got offers to play out of town, but they didn’t take it and stayed put and eventually guys started dropping out of the band.

MP: Is there a personal connection to Augie’s story with you, in terms of show business and choices?

JM: Man, I didn’t even want to get into that. I had a shot, too. Out in Hollywood. And I couldn’t take it. I had a choice to make – my family and this restaurant, or that. I had it pretty much handed to me out there, and I didn’t take it. Do I have regrets? Yeah, I have some regrets, but it’s always about the trade-off.

MP: And the fact of the matter is, this play would likely not exist if you had not traveled that path.

JM: Right. It would not exist. And you know what? All the stuff I did out there, all the big TV shows and movies and stuff, they were shallow moments for me without my family out there. I’m 69. What’s happening to me with this play, with the feeling I’m getting and the strokes, has been the highlight of my life.

MP: The reviews have been great, and you’ve had sold-out houses. It must be fun.

JM: I go there almost every night, because I want to see the pacing and I want to listen to the actors in case there’s something I want to change. They always introduce me at the front of the play, “We have a special guest.” They point me out and I stand up, and whenever I hit that lobby I get a thousand questions and comments from the audience, wanting to know how I did it and about Augie. It’s fun, I’m having a lot of fun with it.

‘The highlight of my life’: Joe Minjares brings back Augie Garcia for a rockin’ encore