As hopeful as everyone was when the Minnesota Orchestra landed in Cuba last week, I don’t think anyone could have prepared for how profound the experience would be. I struggle to recall another situation where I’ve seen music so literally change people’s lives in such a short amount of time. People weren’t just inspired by what happened, they were transformed … in very concrete ways.

This tour has created ripples that will continue to spread, in ways we can’t yet foresee.

For example, it transformed the way Cubans viewed Americans — and how both sides relate to each other. Take Music Director Osmo Vänskä’s masterstroke of playing the Cuban and American anthems together on Saturday night. It was a bold gesture, and it is nearly impossible to express the magnitude of that gesture for everyone who heard it. Hearing these two anthems played side-by-side in a spirit of mutual respect, Americans and Cubans wept openly. That simple gesture melted years of tension away like ice under Havana’s sun.

But there was more, too. While the weekend’s marquee concerts at Havana’s Teatro Nacional were the nominal headliners of this tour, they were neither the most memorable or nor the most important thing to happen.

No, the most important element of the tour was the human interactions with the Cuban people.

I firmly believe that during those few days they spent in Havana, the musicians transformed a generation of Cuban music students. The musicians didn’t drop by a school for a photo op, or limit themselves to master classes for a few handpicked students. They did much, much more, and it was profoundly humbling to watch. Trombonist Doug Wright provided mouthpieces for a student to help him with his tone production; others provided students with music scores, valve oil, or even bows.

More than this, the musicians provided encouragement. They provided wisdom and support. And they provided practical knowledge.

MinnPost photo by Scott Chamberlain
In a show of hospitality, Cubans welcomed the orchestra’s arrival with drums, signs and stilt walkers.

Harpists Kathy Kienzle and Ann Benjamin took one look at the dilapidated, Soviet-era harps the students were using and said, quite simply, “No.” They cleared the rest of the afternoon and gave those students a master class in harp repair, using the harps they had brought from Minneapolis to illustrate their points. Then they gave another master class in harp performance — and then sat down with students to help petition the administration to expand the conservatory’s harp program.

The students’ gratitude knew no bounds. Many students made it a point to come to both concerts, and to seek out their Minnesota mentors before, after, or sometimes during the performances. Some wanted to introduce them to other family members, some wanted additional advice, but some just didn’t want to lose these important human connections. And despite the difficulties in communications between the United States and Cuba, the students promised to find a way to stay in touch.

It wasn’t only the musicians who took part in the tour, however, and it wasn’t just the musicians who had an impact. The trip was notable in that several business and community leaders, along with members of the Minnesota Orchestra’s board, took part; the power of their “person to person” diplomacy cannot be overstated. This group embodies some of the best aspects of American culture — generosity of spirit, a wonderful curiosity about the world, and a deep commitment to supporting the arts. If we are to show the strength, ingenuity and values of our country, who better to send than Marilyn Carlson Nelson, Luella and Stanley Goldberg, Warren and Linda Mack, or any other of these cultural ambassadors? The connections these people made will similarly create ripples in Cuba’s economy, society and politics that will spread for some time. 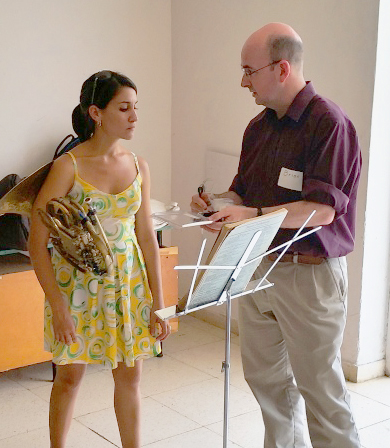 MinnPost photo by Scott Chamberlain
Horn player Brian Jensen, right, provided a lightning-round tutorial to a
student on how to make repairs to her instrument, and then handed his
tools to the excited player.

But perhaps the most intriguing transformation came from within the organization itself. This tour was unique — when a group goes to Europe, for example, the participants usually have a whole range of built-in connections to people, places, or memories. The tour attendees split off and run in their own directions, essentially creating their own personalized mini-tours.

On this tour, however, everyone stayed together. Some of this togetherness was the result of regulations put into place by both governments, leading to restrictions on what people were allowed do. Some was dictated by the hugely compressed timeframe, which meant there were few chances to get away. Some was because of the language barrier. But a great deal of it was because by and large everyone was off the grid; Internet service was severely limited, and most people abandoned any effort to check emails or Facebook.

Bonds created within the orchestra

Whatever the source, this time spent together with a shared purpose created deep bonds among all participants. Everyone got to know each other as people and as professionals. And more important, everyone had an up-close and personal view of how each individual contributed to the overall success of the Minnesota Orchestra.

These newly forged connections will transform the organization as a whole, leading to a new sense of shared purpose and collaboration. Coming after the labor difficulties of the last few years, this will lead to an organizational renaissance.

Everyone is home now, but I firmly believe the ripples created through this tour will continue to grow and spread over time, both in Minnesota and in Cuba. The tour will one day pay dividends we cannot even imagine now. This tour was a game changer.

Minnesota Orchestra in Cuba: Connections forged in Havana will have lasting effects