As part of their historic tour in Havana, the musicians of the Minnesota Orchestra made a visit to one of Cuba’s most important conservatories to meet with Cuban music students, and it was hard not to get swept up in the excitement. At the initial meeting, nervous smiles gave way to increasing laughter. Eyes sparkled. Curious souls darted from room to take in as much of the activities as they could. Questioners peppered each other with a mish-mash of languages and gesticulations whose incomprehensibility sparked even louder laughter. They were loving every second of it.

And the Cuban students were pretty giddy about it, too.

This exchange program, and others that followed, served as a clear reminder that although this tour is certainly historic, and will likely have all kinds of political and economic ramifications, it is at its heart a cultural exchange between people who are hungry for a chance to learn about each other. And to share the wonderful, global language of music.

The various workshops and rehearsals with music students have taken up an enormous amount of time and energy for this tour; the orchestra musicians have worked with the Escuela Nacional de Arte (a high school) and the Instituto Superior de Arte (a college) that together form one of Cuba’s top music academies. Also, there has been an open rehearsal with the Orquesta Sinfónica Juvenil del Conservatorio Amadeo Roldán, plus another side-by-side rehearsal with the Instituto Superior.

For the Minnesota Orchestra musicians, these interactions have provided the tour’s most powerful, gratifying moments.

Cellist Marcia Peck, for example, was deeply impressed not only with the students’ talent, but their welcoming openness. “We were fast friends,” she explained. “It was remarkable. They were so excited to meet with us, and didn’t want to let us go. There was such camaraderie as they asked about advice, mentors … everything. No reserve, no holding back. They knew they only had a few brief minutes with us, but they wanted to make each and every one of those minutes count.”

But the students’ questions were also savvy, and showed how much attitudes have changed since President Barack Obama announced he was attempting to reset relations with Cuba on Dec. 17 of last year. Indeed, the date has already become an iconic milestone for the Cuba people. One young woman asked, “After December 17, anything is possible, and I have new horizons. Maybe when I graduate I can take a job with an American orchestra. Maybe in Florida so I can still get home easily to see my family. What are the pieces I need to know to do well in an American audition? What do American judges look for?” 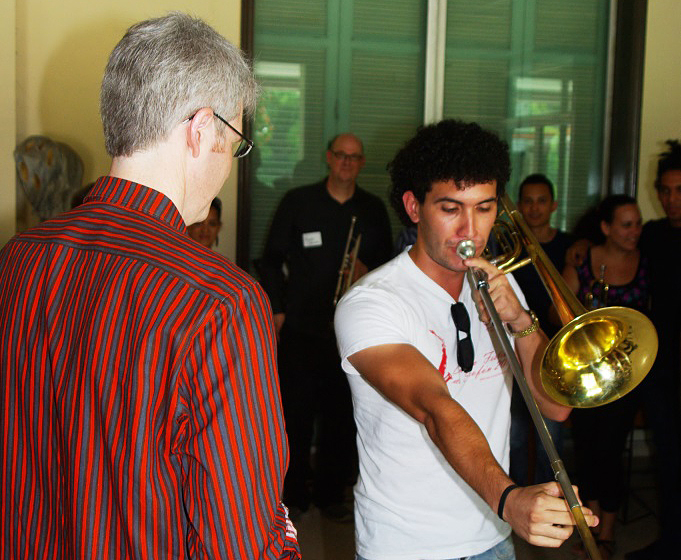 In other cases, the exchanges were a little more … well, literal. Trombonist Doug Wright was working with a university student, providing tips that the young man might use to improve his technique. With some consideration, Wright suggested that a slightly different mouthpiece might help his tone. Then, without missing a beat, Wright pulled two mouthpieces from his case and asked the student to try them, to see if he noticed a difference. The student thought the first one was fantastic, but then completely fell in love with the second. Wright smile broadly and said, “Well, our governments allow us to give ‘friendship gifts’ to each other. You’re my friend, so they’re both yours. The student looked on with absolute shock, but Wright continued, “I always carry extras, but you need these, right? Good musicians need good tools.” The student’s look of shock transformed into a grin brighter than Havana’s daytime sun. He repaid Doug by presenting him with hand-made copies of the music he was working on.

Again and again, the students remarked how thrilled they were to be mentored by the Minnesota Orchestra. Conducting student Milva Cala Pino had a quick, intense question-and-answer session with Music Director Osmo Vänskä, and again, made the most of it. She had particular questions regarding Stravinsky’s Rite of Spring, and remarked how important it was to hear perspectives of someone who really breathed this style of music. She particularly loved his ideas of balancing your heart and head, and Vänskä’s suggestions about how to demonstrate each in her gestures.

Sometimes, the students’ reactions were a bit less lofty. Tony Ross demonstrated Mark Summer’s “Julie-O” for solo cello, a piece the composer wrote in honor of his girlfriend. He went on to explain that it was so popular with his students in Minnesota that he ultimately had to work it into his own repertoire. The students listened with rapt attention. When it was over, one young woman leaned over to the guy next to her, and demanded, “When are you writing something like that for me?” He responded simply by kissing her cheek. 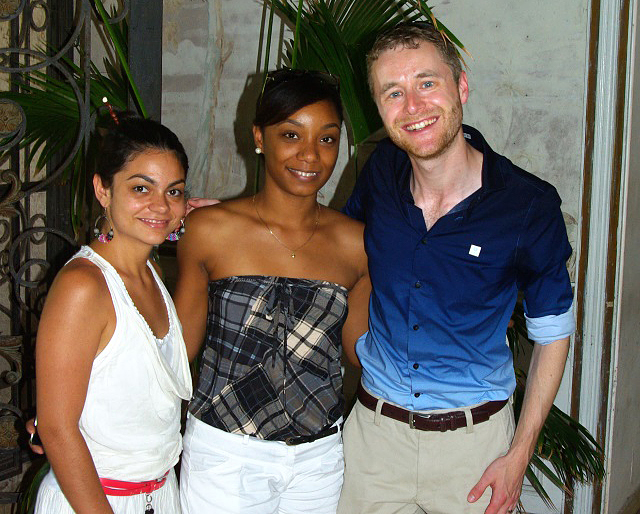 In all, many musicians commented on how similar these Cuban students were to their own students back home. Trumpeter Manny Laureano found this particularly striking. “Those workshops had the same rhythm, the same dynamic that my rehearsals have with the Minnesota Youth Orchestra. Anyone who teaches would pick up on that same vibe immediately. It’s so surprising, and it sounds so cliché, but it really does show that across cultures, across boundaries, kids really are the same.”

He added, “And I have to say, the kids here just melt your heart. They want to learn everything they can from you to improve their game. They love music, and throw themselves into it with all their gusto. That’s what makes them such wonderful musicians. It’s not just the talent — although they have that in spades — it’s the passion they have for music that makes them great. They are phenomenal.”

But the exchange didn’t flow in one direction only. As percussionist Brian Mount noted, “We’re doing López Gavilan’s “Guaguancó” for the side-by-side rehearsal, with the conductor on the podium, and it’s a real treat for me to play it. The piece incorporates a fantastic mix of local Cuban percussion. I’ve studied and played these instruments for years, and I love working with them. But this is a fun chance to work with these drums in their traditional home, alongside kids who have grown up playing them. That’s the perfect kind of cultural exchange.”

In truth, Mount’s words speak to the orchestra’s tour as a whole — it really is the perfect kind of cultural exchange.

Scott Chamberlain is a classical singer who writes the blog Mask of the Flower Prince. He is in Cuba this week traveling with the Minnesota Orchestra. Look for two more articles from the trip on Monday and Tuesday in MinnPost.