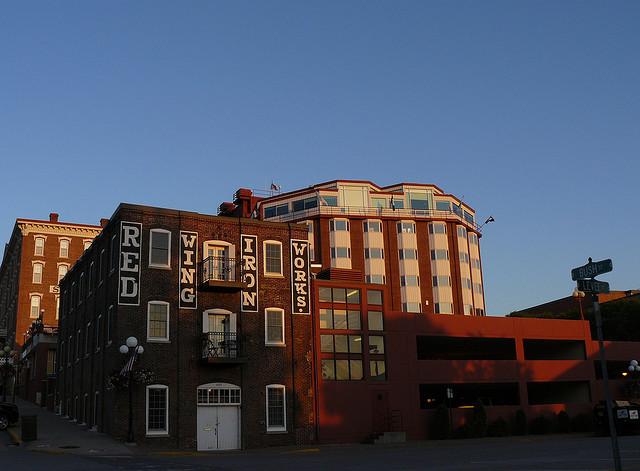 CC/Flickr/cursedthing
The community in Southeast already making the most of its creative appeal is Red Wing, a small river city with a bustling downtown.

The McKnight Foundation commissioned writer Jay Walljasper to do a series of reports looking at the prospects and challenges in Minnesota’s 80 counties outside the metro area. This is the first of four articles excerpted from the first report, focusing on Southeast Minnesota. (For purposes of this report Southeast Minnesota covers what’s south of the metro area and east of I-35, which is slightly different from maps used by Minnesota’s Department of Employment)

But it’s been in the headlines more than ever since last fall’s elections, in which Republicans won every single nonmetro seat in the state House of Representative except Rochester, Duluth, Moorhead, Winona, Northfield, Austin and northeast Minnesota. (And it could be argued that many of these places are more urban than rural in character.)

Some DFLers have been targeted as anti-rural for opposition to frac sand mining, sulfide mining, new oil pipelines, some large-scale agriculture practices and the easing of pollution laws. The argument is that environmental and other regulations hinder economic possibilities for hard-hit rural communities.

This leaves some people all over the state wondering if we’re experiencing a failure of imagination about Minnesota’s 80 nonmetro counties. Is more corn or mining the only hope for rural communities? (Especially when you factor in fluctuating prices, rising-and-falling employment and ecological risks.)

The success of the Mayo Clinic in Rochester, Fastenall industrial supplies in Winona, the revival of the Faribault Woolen Mills, and the tourist-driven renaissance of Lanesboro — to cite only Southeast Minnesota examples — point to the essential role of creative innovation in rural Minnesota’s future.

At this point Southeast’s economy shows the most promise of any region outside the Twin Cities metro, thanks in large part to the continuing growth of the Mayo Clinic along with diversified agriculture that better withstands upheavals in commodity markets and the area’s surprising scenic beauty and historical character, which draws increasing tourists and some new residents.

Still, a cloudy economic picture emerges in recent figures from the Minnesota’s Department of Employment and Economic Development. There are more than two job seekers for every position open — with 45 percent of those jobs part-time. The median wage for all jobs is $11 an hour, while DEED’s cost-of-living research shows $14.50 is necessary to support a family in Southeast. Three Southeast counties — Winona, Mower and Fillmore — have poverty rates above the state average. Meanwhile, broadband connections are spotty in some places and firms face steep hurdles in attracting young talent. 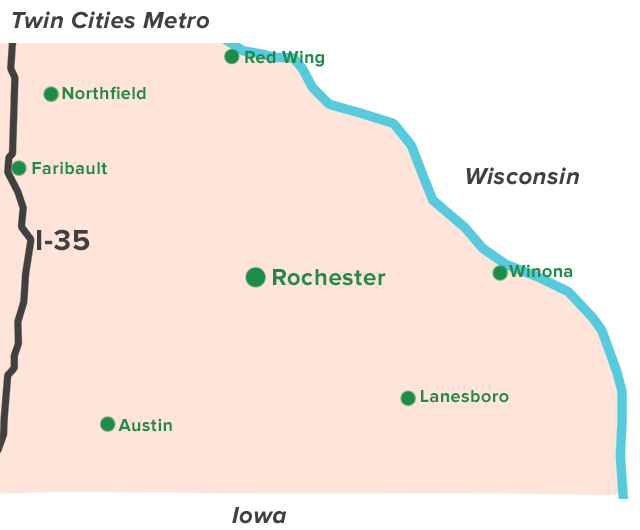 For purposes of this report Southeast Minnesota covers what’s south of the metro area and east of I-35.

Thriving in the countryside

The key to success in the changing economy of the 21st century “is for a community to be specialized — have something they are known for,” explains Tom Fisher, dean of the University of Minnesota’s College of Design and a national authority in the new field of community resilience. “And not just low wages or soybeans, which leaves you vulnerable if a decision in some far-off city closes a factory or changes the price of a crop. Small towns need help gaining the confidence to go in a new direction and stand out — that’s what you need to thrive.”

A bold example is Austin’s Spam Museum, which took a product whose reputation sank so low it became synonymous with unwanted email and turned it into a tourist attraction that figures in a downtown redevelopment push, which is part of the city’s broader revitalization initiative. The point here is not to replicate the museum’s success elsewhere with an ethanol theme park, but to channel this kind of creativity in new directions.

While a lot of Southeast’s plans for the future still focus on Rochester (the subject of Thursday’s story) and agriculture (the subject for Friday), the region as a whole possesses some assets that economic prognosticators like Richard Florida cite as important for future prosperity in a changing era when companies, investment and jobs can be easily uprooted: scenic beauty, recreational opportunities, arts attractions, historic downtowns, an authentic sense of place, and good colleges. With 28 percent of adults over 25 holding at least a bachelor’s degree, Southeast equals the national educational average, no small accomplishment for a largely rural region.

A tale of two creative cities

Northfield and Winona — each with two liberal arts colleges — look like top bets right now outside of Mayoland for generating the inventive energy and technical savvy that spell success in the 21st century. Both towns sport historically rich downtowns, which provide the inexpensive, interesting space that many start-up businesses favor. Northfield’s is postcard perfect while Winona’s rough-around-the-edges feel might inspire creativity in young entrepreneurs. Street life exists in both places, with an assortment of shops, cafés and bars to suit most young people’s tastes.

Both towns also punch way above their weight when it comes to arts. Northfield welcomes artists and artisans to show their work on the Riverwalk Market Fair, creating a premier art venue each Saturday June to October. The Northfield Arts Guild presents art shows, dance performances, classes and stage productions in two historic downtown venues.

Winona, meanwhile, is emerging as a full-blown arts destination, with the see-it-to-believe-it Minnesota Marine Art Museum, the Great River Shakespeare Festival, the Frozen River Film Festival (gaining prominence as a showcase for documentaries) and musical events ranging from the Minnesota Beethoven Festival to the Mid West Music Fest.

Winona also offers easy access to the great outdoors, another hallmark of places that win favor from so-called “creative class” businesses. The Mississippi River is dotted with islands, perfect for Huck Finn backwater adventures. Most of the steep bluffs towering the city are protected in parks and preserves, ready for hikers, mountain bikers and x-country skiers.

Arts mecca on the Root

Tiny Lanesboro (pop. 754) takes the cake for artistic output per capita in Minnesota, or maybe anywhere in the Midwest. In 2013, it was named one of the top 12 small towns for art by the influential collaborative ArtPlace America.

Feeling more like a village than a small town, it’s nestled below a cliff in the Root River valley, prized for kayaking, fishing and bicycle trails. Main Street, known here as Parkway Avenue, is home to the Commonweal Theatre Company, which stages classic and contemporary plays, including 20 world premieres and an annual production of Norwegian playwright Henrik Ibsen’s work — the only theater company in North America making that commitment. You’ll also find the Lanesboro Arts Center, a gallery showing top Midwest artists; and the St. Mane Theatre, an art deco movie house hosting far-from-provincial performances. Stopping by on a Wednesday night last December, I discovered that master storyteller Kevin Kling was collaborating with the experimental music ensemble Zeitgeist and accordionist Victor Zupanc. Wondering how that would turn out, I got a ticket and was delighted.

Lanesboro Arts, which runs the gallery and theater along with an artist residency program and arts in the park events, is dedicated to answering the question posed by Executive Director John Davis: “How do you use creativity to re-imagine your town?”

“How would we get scenarios where kids from here go to the U, go to Luther College, go to Harvard but have a reason to come back?” asks Davis, who grew up in Minneapolis but discovered he likes small-town life. Part of the answer might be the Arts Campus, a community-wide initiative to integrate the arts more deeply into the fabric of Lanesboro life.

The community in Southeast already making the most of its creative appeal is Red Wing, a small river city with a bustling downtown.

Red Wing Shoes, known around the world for sturdy quality, and other manufacturers have long anchored the local economy but town leaders see an opportunity for growing and attracting new businesses. John Becker, who owns a fine art printing and custom framing businesses here and in Rochester, ticks off Red Wing’s key assets: the river, the bluffs, downtown’s central role in the community, proximity to the Twin Cities, the elegant city-owned Sheldon Theater, a strong historic preservation ethic, a growing arts and handicrafts community, unique locally-owned businesses, growing ethnic diversity as seen by three Mexican groceries, low rent in handsome old buildings and, most of all, people embracing a big vision for the community.

The Red Wing Innovation Incubator nurtures creative sector entrepreneurs with low-cost downtown workspaces and other support while The Cultureshed aims to activate underused space and other assets in the community to shape Red Wing into “an economic hub for creativity, innovation and industry.”

Red Wing Ignite is a locally grown initiative partnering with US Ignite, a project of the National Science Foundation and the White House for making sure the next generation of Internet applications creates wider public benefits. In addition to state-of-the-art Gigabit Internet service reaching all households in town by the end of the year, Red Wing Ignite has launched a business accelerator connecting entrepreneurs with investors, mentors, and regional and national partners. They also host regular educational and networking events as well providing offices and meeting venues at a new co-working space in the former Red Wing Shoe headquarters downtown.

Additionally, Red Wing enjoys high levels of civic involvement, as seen in Live Healthy Red Wing, a coalition of 10 organizations promoting better health through projects like walking and biking guides, safe routes to school plans, community gardens, school nutrition programs and improvements to crosswalks and park trails. “People are drawn to big cities that are healthy,” says coordinator Michelle Leise, “and the same goes for smaller towns where you can walk, bike, garden and connect with people.”

John Becker muses how Red Wing could look in a few years: “The schools are full, there’s a strong sense of community and purpose, there are plenty of public gathering places, the city is more walkable and bikeable with lots of business opportunities, lots of independently-owned businesses, not a lot of franchises and large parking lots, everyone knows their neighbors.”

Jay Walljasper writes, speaks and consults nationally about how to create healthier, happier communities. His website:JayWalljasper.com.