In the summer of 1964, a fledgling British band rolled into town for a one-night stand at a suburban dance hall. Not yet the international rock icons they would later become, the Rolling Stones played to an unimpressed group of fewer than 300 concertgoers at the Danceland Ballroom at Excelsior Amusement Park.

When the Stones return to Minneapolis this week for their concert at TCF Stadium on Wednesday, they will receive a far different reception from a wildly enthusiastic crowd in the 50,000-seat stadium.

Gary Reins was in the audience at the 1964 Danceland concert. In a 2014 interview with KARE 11 News, Reins recalled that the event was poorly attended: “It was not a big concert and they (the Stones) were not even well liked. … There was some booing; I don’t think it was big like ‘get out of here,’ but yeah, there was some boing. Like ‘Who are these Beatles wannabes?” or ‘What are these guys?’ But I thought they were great.”

Reins remembered that the $6 ticket price for the concert seemed high at the time. “Mostly we were used to paying about a dollar and half, so the six dollars may have kept people away,” he said.

Danceland was clearly not a highpoint in the Stones’ career, but the Minnesota event deserves a footnote in the history of rock ‘n’ roll because of a chance encounter between Mick Jagger and a local character named Jimmy Hutmaker.

According to local legend, Jagger had gone to an Excelsior drugstore the day after the concert. While he was waiting to fill a prescription, Jimmy was ahead of him in line, ordering a cherry Coke, but the drug store had run out, so he had to settle for a regular Coke. At that point, Jimmy turned to Jagger and uttered the famous line: “You can’t always get what you want.”

Years later, Jagger used that line as the title of a song, and it became one of the Stones’ greatest hits. Jagger put the drugstore in Chelsea and cherry Coke became “cherry red” soda, but Mr. Jimmy got a mention in the lyrics.

At TCF Stadium, concertgoers will find that ticket prices have escalated substantially since that earlier time at Danceland. Front row seats in the open-air venue are now going for just under $8,000.

“You can’t always get what you want” may or may not be on Wednesday’ program, but many boomers in the stands that night, reliving their youth, will probably remember the lyrics, word for word. 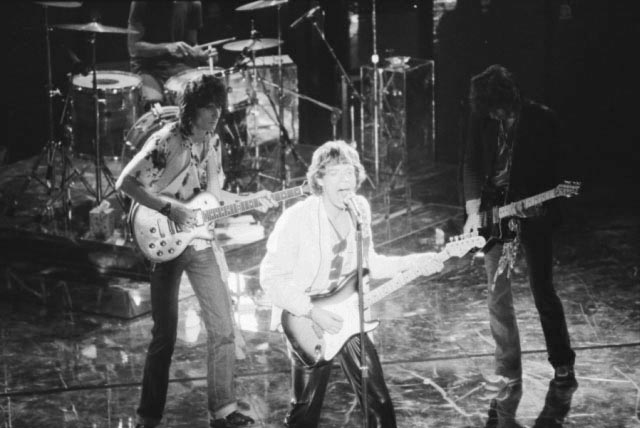 Courtesy of the Minnesota Historical Society
The Rolling Stones during a 1978 performance.