The reserve police officer who stopped me on Buford Road on the University of Minnesota’s St. Paul campus told me there was no public parking on the west side of the Minnesota State Fair. I could go back out and circle around to the east side, or I could park in a ramp on campus.

He didn’t roll his eyes at me, a fair virgin, he just told me that it was but a few hundred yards beyond the barricade. He was very patient. But it was only 9 a.m.

Washingtonians love their fair. They do not, however, have the same intensity of feeling about it as people do here, a rapture that flows from Minnesotans toward their state fair.

“Have you been to the fair yet?”

“Have you been to the fair?”

“When are you going to the fair?”

(Of course, nobody said, “Do you want to go to the fair with ME?” But that’s to be expected.)

The fact that I arrived last summer, before last year’s fair, and yet didn’t go made me suspect. I quickly learned that the Minnesota State Fair is like hot dish and the skyways. If you don’t have anything good to say about them, best not to bring it up.

This year was going to be different. I would definitely go to the fair, if only to see what the big dang deal was.

So here, without fear, favor or any transitions, is what I found:

1. No photography is permitted at the painted mailboxes booth. For obvious reasons.

2. Everyone talks about the seed art or crop art, that sort of paint-by-numbers exercise but with different kinds of seeds and beans and without numbers. It is pretty cool, but I was disappointed by how few “art” works there were. A few hundred or so, maybe more. What do these people do all year? 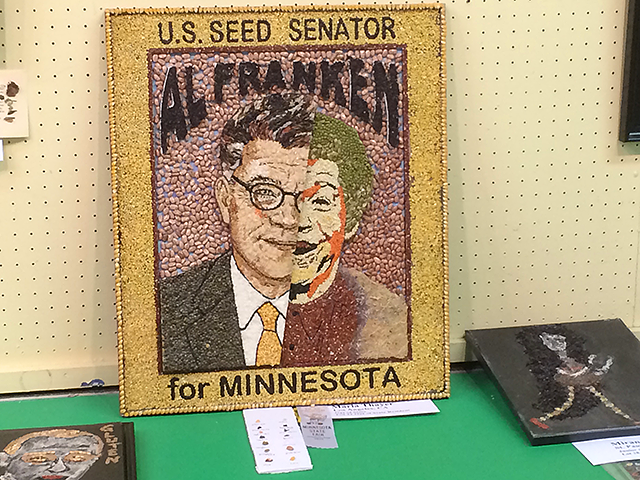 3. The prize-winning seed art featuring U.S. Sen. Al Franken as part senator, part Stuart Smalley (or is that a ’60s-era “The Joker”) was done by a guy from Los Angeles. Figures.

4. One acre of soybeans can produce 82,368 crayons. It’s true. I read it in the Agriculture-Horticulture Building, which is a delightful Art Deco structure shaped like a wheel, with different displays in each spoke. One was devoted to Dirt. I like that. In the beekeeping spoke, there was a sign that said that “Honey Candy Has Moved to The Dirt.” I still wanted some. 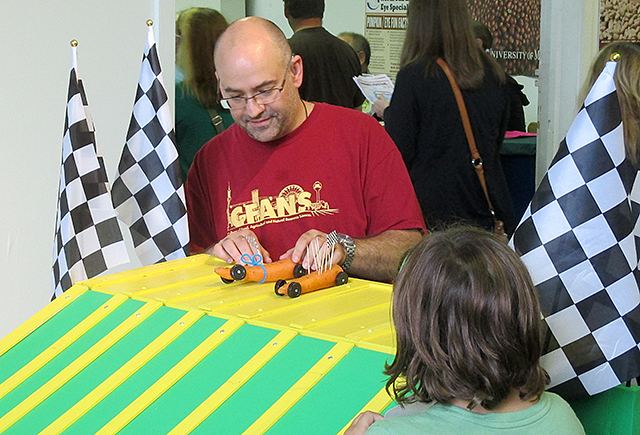 5. Apparently they race vegetables here. Two different places let kids put wheels and other stuff on carrots and race them. I wanted to use one of the giant zucchini, located by the giant pumpkins, but it wouldn’t fit on the track. (By the way, how hard is it to grow giant zucchini? Just leave them in the garden for a few extra weeks and they get so big no one at work will take them.)

6. The Al Franken booth was located just outside the ag building. I suggested they borrow the seed art portrayal of the senator; one of the women in the booth said she hadn’t seen it, even though it was right across the road. “I’m afraid of the fair, so I stay in the booth,” she said. I told her I thought that might be for the best.

7. The fair seems like a strange place to line up to buy Lottery tickets. Can’t you get those anywhere?

8. Trees. Big trees. Old trees. Trees with lots of leaves. And lots of shade. The state fairgrounds in St. Paul has lots of them. The Washington State Fair doesn’t have many trees.

9. They let people smoke in odd areas throughout the fairgrounds, marked by flag banners stuck in the ground. One such place was next to a rather dry looking piece of chainsaw art of a cow wearing a dress and hat. It looked a little risky, but I’m sure the fair people know what they’re doing.

10. I began to wish I’d rented an electric scooter. They’re $55 for the day but that seems worth it. 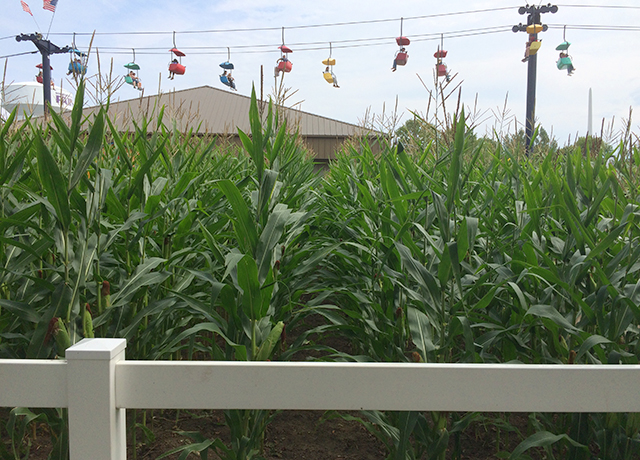 11. This fairgrounds has a lot of cool, historic buildings made of stuff that doesn’t burn down: brick and stone — Depression era designs, it seems. The Lee and Rose Warner Coliseum should be in a movie.

12. I passed a food booth that had pancakes. I really wanted some pancakes. But I figured getting pancakes at the state fair is like buying lottery tickets at the state fair. But I wanted pancakes, and the cook was patient enough to not roll his eyes when I didn’t understand the ordering logistics.

13. A lot of people talk about the Miracle of Birth Center, where folks crowd around pens where farm animals are giving birth.

“It’s a girl,” said the woman with the microphone. “We’ve got 12 now and the girls outnumbers the boys.”

“I knew it would be 12,” said a passerby to her companion.

Do they bet on these things here? Do bookies make a killing taking wagers on litter sizes and the vegetable races? I agree that it’s a miracle, but I’ve never really wanted to know where my protein comes from; and I certainly don’t need to see it born.

14. Minnesota people seem very concerned about how they rank and will readily fill any vacuum in conversation with rankings and statistics and comparisons in which the state does especially well. Let me add one: Minnesota animal barns smell way better than at the Washington State Fair. Maybe Minnesota livestock don’t stink or maybe the engineers here have mastered the concept of ventilation. Either way, it is quite welcome. I generally shy away from exhibits that suggest hand washing after visiting, but I like the ag areas of these grounds. It’s what state fairs are supposed to be about. Otherwise they’re just big carnivals. 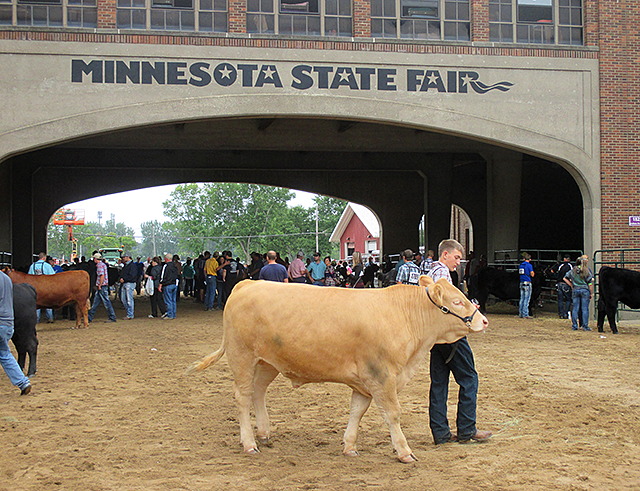 16. The cattle barn is nicer than the swine barn. Both are impressive. All of which makes their relative lack of odor even more remarkable.

17. You know you are at a state fair when you pass a sign that reads “No horses beyond this point.”

18. At a food booth advertising “Big Fat Bacon” was a woman taking a picture of her half-eaten Big Fat Bacon.

19. I like that they sell beer and wine at the fair and that people just walk around with plastic cups full of the stuff. But given how strict some of Minnesota’s liquor laws are, it seems out of sync.

20. There are surely examples of  too much of a good thing at the fair. Like the old drunk guy in the men’s room singing and trying to get other — uhh, patrons — to chat. I knew he was drunk because he was trying to engage Minnesotans he didn’t know in conversation. It was only 11:15, so I suggested he pace himself. He didn’t answer.

21. There were way more quilts than pieces of seed art. 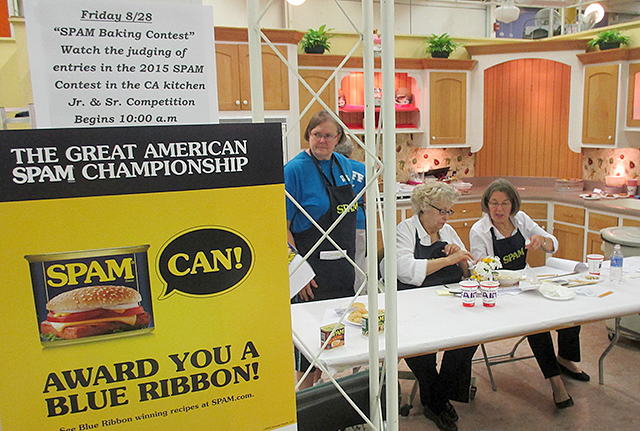 22. I watched the judging of the baking portion of the Great American Spam Championship. I felt there was really nothing left to see at the fair after that. Then I saw the winners of the bar-baking competition.

23. A glass case protected the winners of the snickerdoodle challenge. All snickerdoodles look alike to me. But then, I’m not from here.

24. I was really hoping some of the parents who took their kids out of school to attend the fair would make them spend the day in the Education Building (which looks like a remnant of the 1962 Seattle World’s Fair; apparently this is what the future was going to look like if we decided that Googie architecture was the future). Inside, every other booth was giving out paper fans. There wasn’t a big demand for them.

26. I’m not sure I get the Old Mill but I didn’t want to wait through a pretty long line to find out. Besides, I was by myself, which would have made it awkward to go on what the ride described as a tunnel of love.

28. I didn’t eat anything made with cheese. In fact, I didn’t have any of the high-fat, high-sugar, high-bacon dishes that people in Minnesota have been talking about for months. I did have a turkey sandwich in solidarity with the turkey farmers. Because that’s what we do here. 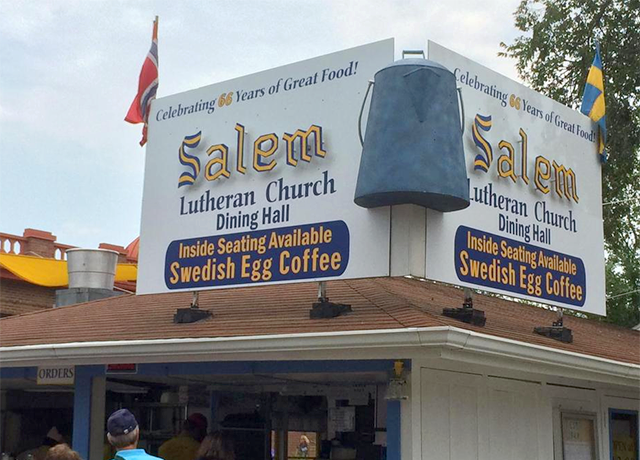 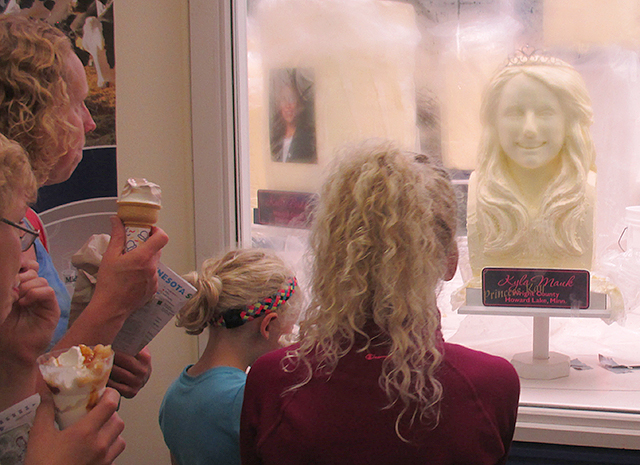 30. The windows were fogged up at the Princess Kay of the Milky Way window, where they display visages of the fair royalty carved out of butter. I thought I was missing out before getting up close and discovering only one had been finished. I guess it looked like her. The rest were still big blocks of butter. 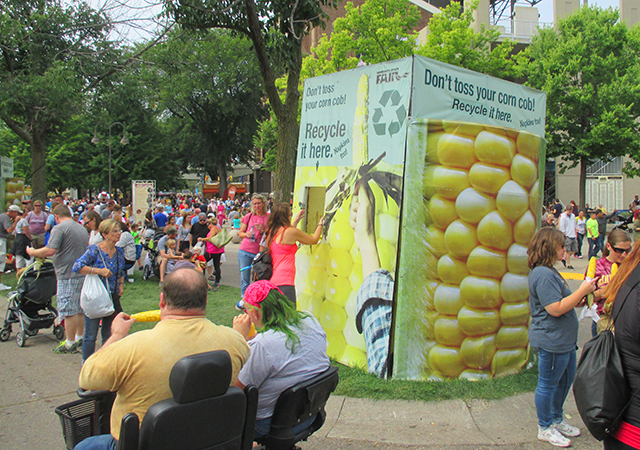 31. People who eat corn on the cob can recycle their cobs, which is pretty cool.