Despite such landmarks as Midway Books and the Minnesota State Fair, St. Paul’s Snelling Avenue is the road most often traveled to get somewhere else. That much was recognized by Jonathan Oppenheimer, a University of Minnesota student in the social work master’s program and the co-founder of the Friends of Hamline Park group, who wanted to bring some heavenly beauty to hardscrabble Snelling.

“This is my neighborhood and I want it to be everything it can be,” said Oppenheimer last week, sitting in the otherwise empty Snelling Café. “There’s a lot of cool stuff going on, but it’s also a state highway, so it’s never been pedestrian-friendly. So a lot of the folks in the neighborhood talk about it, sometimes disparagingly, about how it’s drab and dirty, or the businesses aren’t for them. Part of that is they’re immigrant-owned businesses that cater to their communities, which is awesome, and they’re super open to have people come in, but for some people there’s a discomfort in going in. This (the Snelling Café) is a prime example. 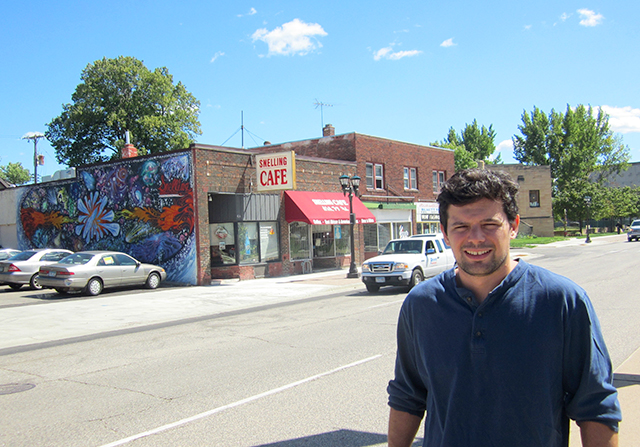 Oppenheimer lined up four muralists, applied for and won a $25,000 grant from the Knight Arts Challenge St. Paul (which was matched by area businesses) and – voila! – The Midway Murals Project was born.

“My total budget is about $88,000 right now, and it was very important for me to pay artists not only a living wage, but what really they deserve,” said Oppenheimer. “So I take a lot of pride in saying I’m going to pay them $50 an hour. Artists should have the freedom to do what they want, but for the murals there was a loose theme given to them, of ‘starting anew,’ which could be interpreted as the immigrant experience, or brighter future, or the changing face of St. Paul with the Green Line.”

The project will culminate in the murals’ unveilings at the Midway Art Festival Aug. 29 at Hamline Park, which will also include live painting, interactive art exhibitions from Dim Media and Rogue Citizen, music, dancing, sidewalk chalking, food, and speakers celebrating Snelling Avenue’s rebirth. MinnPost got a preview: 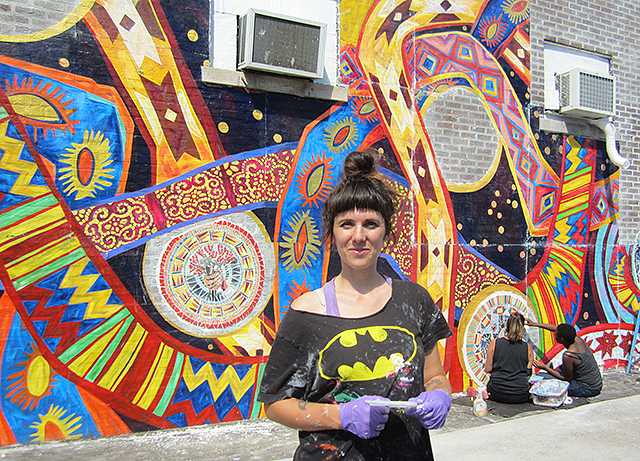 Greta McLean and crew at the Piazza Market and Sunshine Café and Beauty Salon: “The mural is called ‘braided,’ and what you see is a big braid of traditional textile patterns from different cultures that represent different people that live around this neighborhood and different immigrants that have their businesses here. We were really excited that the owner of this building is Ethiopian – or ‘Eritrean,’ now, because of more changes – and so we wanted the braid because it’s so female, and it crosses different cultural lines and speaks to the role of women in the whole immigrant story, a story that’s not normally told from their point of view. But it could be anyone, anyone who wants to relate to it; the thing about the braid is that the different cultures are maintained whole, even as they’re interwoven into our community.” 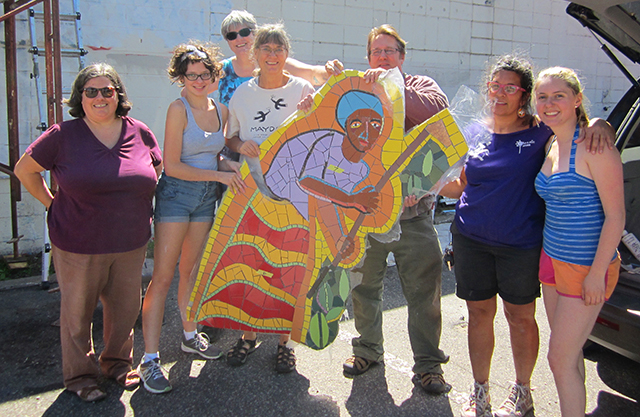 Gloria Green (far right in purple shirt) and crew: “It’s made out of ceramic tile, it represents East Africa, a woman farming the fields and a stream, something we can all relate to agriculturally, and it’s colorful. It’ll take a week to put up and grout. My studio’s two blocks from here, so I’ll be able to see it from my window. I’m hoping it will calm Snelling down a little bit, which is probably wishful thinking. We want it to be more pedestrian-friendly, and I’m hoping it will just get people to stop and check it out. All of these businesses here could use people coming in and checking them out.” 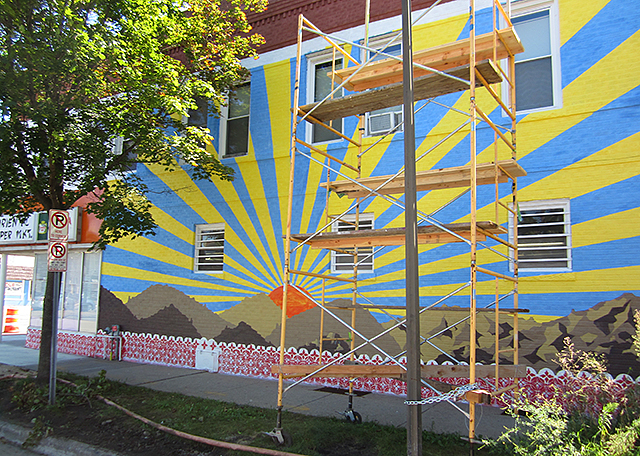