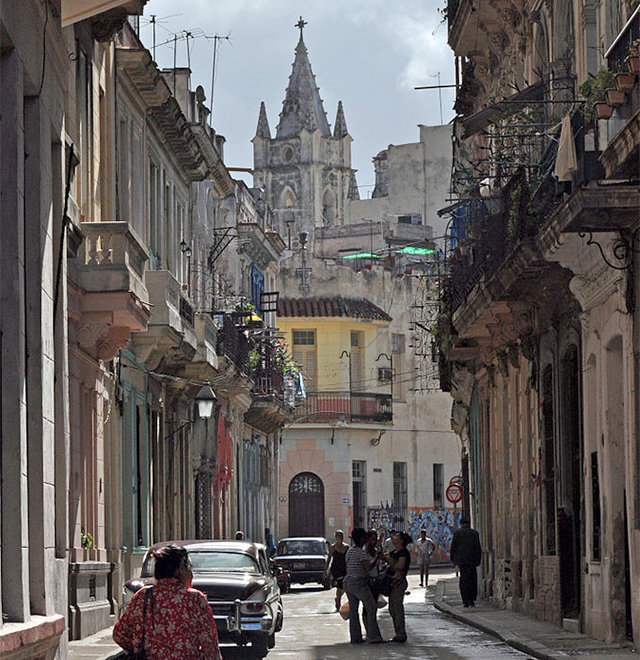 Creative Commons/Escla
This year there were more tourists and more tour buses in Old Havana than ever.

“Our Berlin Wall is the Caribbean Sea,’’ a woman in Havana said, summing up the past half-century of Cuban-American relations.

I hadn’t planned on jumping that wall in 2015, but I changed my mind earlier this year after President Barack Obama’s mid-December announcement about normalizing diplomatic relations with our next-door neighbor.

I wanted to see the island one more time before the U.S. travel ban lifts, and my countrymen start pouring in. And they will – we will – because Cuba has always been a magnet for Yankee tourists and Yankee interests.

This was my fifth visit in 15 years – always as a journalist, which makes me legal — and there have been noticeable changes over that time, usually in the direction of “more.’’

There were more tourists and more tour buses in Old Havana than ever, making the pedestrian-only street called Calle Obispo more crowded all day long. It’s even more crowded in late afternoon – like rush-hour traffic on foot – because that’s when Cuban families join the strolling throngs.

More of Cuba’s famous 1950s American cars have been spiffed up and put to use as taxis and tourist rentals. You still see plenty of decrepit ones, especially in the countryside, but in Havana, so many of the old Chevvies and Plymouths and Fords have been restored, repainted and freshly re-chromed that you’d think a car-collectors’ club was holding a rally in the heart of the city.

But other cars dilute the mix now. Some are ones nobody would bother to restore: junky Russian Ladas leftover from the Soviet era — the 30 years when the USSR stationed thousands of soldiers on the island and bought virtually all of Cuba’s lifeline, its sugar crop. Others are spanking new European models, including SUVs almost too big for the narrow streets of Havana Vieja, Old Havana.

That’s the oldest part of this 500-year-old city. It used to be beautiful, judging by its architecture, and now parts of it are again, thanks to Cuba’s massive investment in historic preservation and restoration.

When I was in Cuba in 1999, most of the buildings around Plaza Vieja were as decrepit as the side streets. But with each visit, I found more and more of them transformed.

It’s been been like watching wounds heal – albeit in very, very slow motion. Now this restoration effort is being extended to key buildings elsewhere in the city.

The National Theater, at the top of the Prado, was veiled in scaffolding during my visit, and so was the Capitolio, the national Capitol building, next door. “It’s just like the one in Washington, only taller,’’ at least three different Havana residents assured me.

Restoration is also beginning on the Malecon, the city’s faded but still-handsome seafront boulevard, which runs west of central Havana toward the Hotel Nacional and what is once again the American Embassy.

The restored areas draw tourists, just like the joint-venture hotels on beautiful Veradero Beach east of Havana, and the exquisite tropical town of Trinidad, and the green and rocky beauty of the Vinales Valley to the west.

About 2.5 million tourists a year – almost as many people as live in Havana – now come to this country of 11.2 million, and Cuba depends on the money they bring. There are now enough restaurants and pretty shops and good museums on the restored streets and plazas of Havana Vieja to keep most tourists entertained.

But deviate a block or two off any restored area, and you find yourself in a tropical version of the South Bronx – crowded, noisy, intensely human and in terrible repair.

With this major difference: Despite its run-down appearance, Old Havana is quite safe.

It’s my favorite part of the city and where I usually stay. I like the atmosphere of those time-worn back streets. People talk to you there, call to you, joke with you, ask where you’re from and invariably smile if you say “Estados Unidos.’’

That always surprises me. Cubans have suffered for more than 50 years under the harsh combination of the American trade embargo and the Cuban government’s own restrictions, yet they manage to distinguish between American policy and American people.

In all these visits, no Cuban I’ve met has ever directed resentment at me personally. I doubt I’d be that generous, if I were in their shoes.

A free tour of the grand hotel was just getting started in the lobby when I came in. I listened briefly to the diminutive white-haired lady leading it but decided not to join it. I wanted to go outside instead and stroll the Hotel Nacional’s luminous green lawns on my own.

The lawns appear to slope right into the Caribbean, though the grass actually ends at the edge of a cliff overlooking the Malecon, Havana’s wide seafront boulevard. 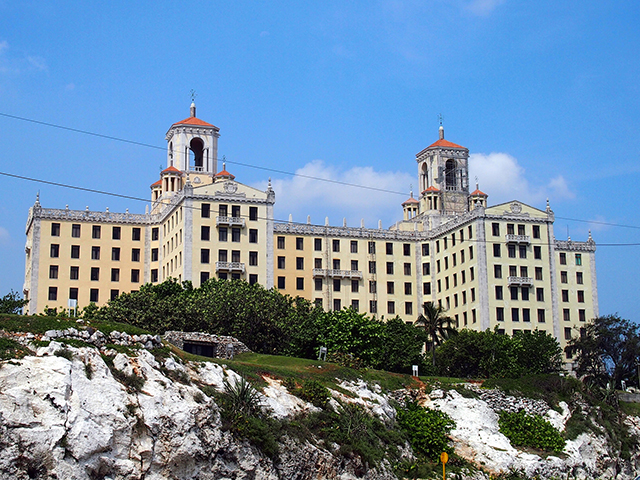 Creative Commons/momo
The Nacional has been a Havana landmark since it opened in 1930.

The view from one of the guest rooms might be more magnificent. But the view from the lawns was good enough, and it was free.

The Nacional has been a Havana landmark since it opened in 1930, and its history runs from the era of gangsters and gambling and glamour right through the Revolution. Now it’s a favorite for top-end tour groups.

Non-guests also come, as I did, for the view and the history, some of which has nothing whatever to do with movie stars and a disturbingly great deal to do with the Cold War.

The hotel’s groomed lawns hide a relic of the Cuban Missile Crisis – the two weeks in October 1962 when the United States and the USSR brought each other (and the world) to the brink of nuclear Armageddon.

A college student at the time, I hadn’t known how close war was until I reached the edge of the Nacional’s lawns and followed signs to a dark bunker, cut into the rock of the cliff below.

Displays at the bunker’s entrance explained the crisis in Spanish and English, and while I was reading them, the elegant little white-haired tour guide arrived with the rest of her flock.

But now her ladylike voice took on an edge, and there was no more mention of Spanish tiles or movie-star guests. Now it was like listening to steel.

A network of narrow, claustrophobia-inducing tunnels led away from the entrance. Following the guide into them gave me a chilling taste of the fear that gripped this city then. If the crisis really had turned into war, Havana would have been Ground Zero. 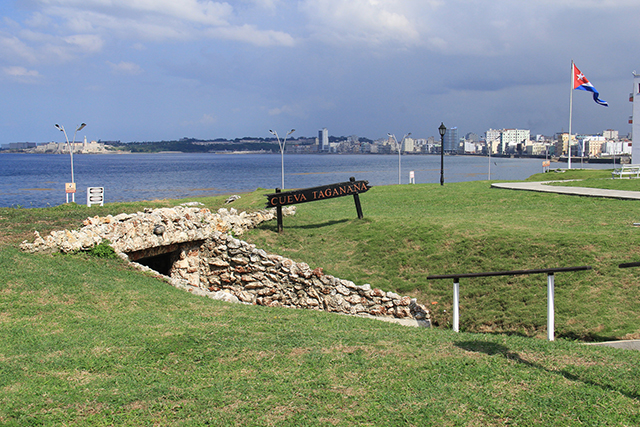 Creative Commons/Natalie Marchant
A college student at the time, I hadn’t known how close war was until I reached the edge of the Nacional’s lawns and followed signs to a dark bunker, cut into the rock of the cliff below.

Deep in the tunnel network, she brought us to a bay in the rock where an anti-aircraft gun had stood, aimed up through an opening in the roof. Beside it was a glass case displaying a fragment of a downed American U-2 spy plane.

U-2 photos had proved the existence of Soviet missiles in Cuba, forcing a confrontation between America and the Russians. There were two kinds of missiles, the guide said crisply: short range and long range. Long range would have hit Alaska.

The glass case also held two pieces of clothing — a plain blue shirt and a pair of dark blue pants, the uniform of the volunteer militias who had pledged to defend Havana. Then came the shock of the tour.

“That was my uniform,’’ the guide said. She had worn those very clothes. She was in college then but had left her classes to join the militia and defend her country.

Walking back to the hotel with her after the tour, I asked her a question that nags at me whenever I’m in Cuba. From this woman, I figured I’d get a straight answer.

“What do you think will happen when Fidel dies?’’ I asked.

“I – don’t – know,’’ she replied, emphasizing each word in her firm, fierce voice.

She paused then. She must have been picturing him as he is now, aged 88 and frail. Fidel Castro had clearly been her hero, and she was still loyal. Her voice softened.

“I don’t like to think of him old,” she said gently. “I would prefer to remember him as he was.’’

Because of the country’s good schools, Cubans typically have a good sense of world history and culture and – not least – themselves. They don’t cringe. They don’t defer. They meet your gaze as equals. And they let you know what they’re thinking. Especially the taxi drivers.

For example, when asked about the differences between the Castro brothers – Fidel, who has stepped down, and Raul, who has just been elected to another five-year term in his place – one young taxista just laughed.

“Everyone believes everything Fidel says,’’ he said, “but nobody believes anything Raul says!’’

Even allowing for its failures and hardships, which have been many, the Revolution did bring universal literacy and universal health care, and Cubans are proud of that. They are proud of what Cuba has accomplished on its own, without us. 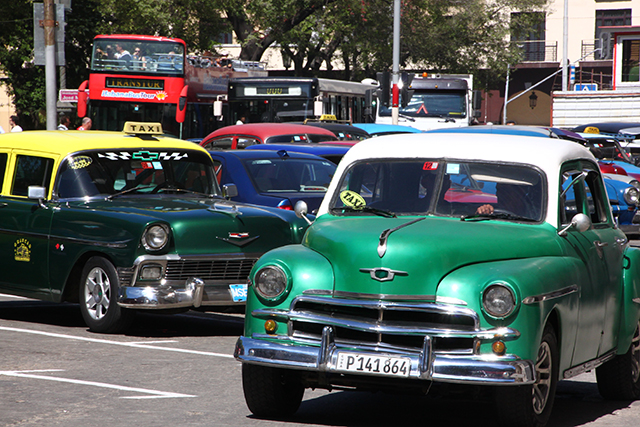 MinnPost photo by Catherine Watson
More of Cuba’s famous 1950s American cars have been spiffed up and put to use as taxis and tourist rentals.

Over and over, Cubans I talked to said they’d like American tourists to come back because it will mean more jobs and a better economy. “It’s the salvation for the economy,’’ an older man said. “It’s the only thing for it to get a little better.’’

My favorite taxi driver is a good example. A sweet-tempered middle-aged man, he drives a red Lada so decrepit that he has to keep the passenger-side window rolled down, because the outside handle is broken and you have to reach inside the car to open the door. When he shifts, it sounds as if the transmission is falling out.

He is fiercely proud of Cuba and of being Cuban. Driving a friend and me from a bed-and-breakfast in Vedado this winter, through gritty Central, to another B&B in Old Havana, he had to stop for a red light in a busy part of town.

“Look,’’ he said, gesturing at the scene. “People are going somewhere — with their kids or into a church or a store or a movie theater. Look! Nobody is homeless! Nobody sleeps in the streets!” He knew full well that we have people living in cardboard boxes and under bridges back in the USA.

Another day, another taxi ride. A different taxista. “Look at that!’’ he said in exasperation, throwing up his hands and hitting the brakes at a chaotic intersection near the University of Havana.

“That” was a flock of laughing high-school kids who had just dashed across the street, mid-block. But he also meant the flocks of everybody else, including four policemen, who were walking in the street instead of on the sidewalks, halting traffic, halting us. We even had a green light.

“Do they walk in the street like that in the U.S.?’’ the driver wanted to know.

I said it depended on the comparative condition of pavement and sidewalk, which led to a discussion about what freezing and thawing does to asphalt, unimaginable in tropical Havana.

My Spanish was working pretty well, so I went ahead and told him the classic Minnesota joke: “We say we only have two seasons – winter and road repair.’’

The driver roared with laughter. “We have two seasons, too,’’ he said, when he finally caught his breath.