‘Hello, my name is Vladimir’

The back streets of Old Havana are walled with old apartment buildings, and the streets are so narrow, they feel like canyons. Residents can stand on their balconies and carry on conversations with people on the other side.

And because everyone has been living in the same spot for more than 50 years – they are only now, in the last four years, permitted to legally sell and buy their houses – everybody on the block really does know everybody else’s name.

There are always people coming and going, walking past open doors and grilled windows, and the pet dogs inside don’t seem to pay the regulars much mind. But they sure can spot a stranger.

I was out on the balcony of my hosts’ apartment, leaning on its art-deco railing two stories above the street, while being barked at from the balcony next door by the neighbor’s guard dog, a little black-and-white Pekinese mix.

Because these buildings have different ceiling heights, the dog’s balcony was about 3 feet higher than where I was standing, so it and I were not just face to face, we were eye to eye.

Either he didn’t understand my gringo accent, or he didn’t believe my soothing Spanish words. Every time I appeared on our balcony, for the six days I stayed there, so did the dog. Eye to eye, and always barking.

Other canine encounters were sweeter.

As always, there were a lot of dogs around Havana – from a 3-month-old Pekinese named Toby toddling through a street market behind his proud owner to a rainbow of 8-week-old puppies for sale on Calle Obispo. They were attracting hopeful kids and some parents, despite being priced at the equivalent of 40 dollars apiece.

But there were fewer strays running loose, and I never saw any hanging around restaurants, as they had in the past. There were still ownerless dogs, all right, but with a difference: The ones I saw were hanging around museums.

They were also wearing paper nametags. “Hello, my name is Vladimir,’’ read the tag on a black terrier mix dozing inside the entrance of the Museum of Silverwork, near the Plaza de Armas. Several other dogs were also relaxing there, also with paper nametags, while the four uniformed ladies who guard the entrance looked on fondly.

Vladimir reminded me of my own dogs at home, so I asked if I could take his picture. Of course, the ladies said. “Vladdy,’’ one woman called, and he put his head up and turned his golden eyes straight into my lens.

But what were the dogs doing there? Taking refuge, it turned out. Being protected. These museums with dogs in their lobbies were ad hoc humane societies.

“We give them food,’’ the lady guard said proudly, “and a safe place to sleep at night, and they are all vaccinated and neutered.” And then everybody smiled, including me.

Hemingway — our man in Havana

“He intended to come back!’’ the young guide at the Ernest Hemingway house insisted this winter. “He left all his books! What writer leaves all his books?’’

Cuba’s favorite American author certainly did leave all his books – 9,000 of them, still carefully preserved on the shelves of the place he felt most at home, Finca Vigia in the Havana suburb of San Francisco de Paula.

The one-story villa stands on high ground with a sweeping view toward Havana and the sea beyond. Hence its name: Lookout Farm. It was built in the 1880s, but it’s not ostentatious – just comfortable.

It’s not the first place he stayed when came to Cuba. That honor belongs to a simply furnished room on the fifth floor of the pink stucco Ambos Mundos Hotel on Calle Obispo, overlooking the Governors’ Palace. It’s a Hemingway museum too, but Finca Vigia is the more famous.

This is where Hemingway spent most of his winters, from 1939 to 1960, when his mental and physical health broke down and his fourth wife, Mary, coaxed him away, first to Europe, then back to the U.S. for treatment.

By then, the famous author was paying the price for decades of heavy drinking, a lifetime of arduous travel, and multiple injuries, including war wounds and a couple of plane crashes in Africa, with series of concussions along the way.

Electroshock treatments at the Mayo Clinic weren’t enough to allay his depression and paranoia. He committed suicide in Idaho, with one of his beloved shotguns, a year after he last saw Cuba. He was just shy of his 62nd birthday.

“He couldn’t write anymore,’’ the guide at the Finca said. “That was the only thing he cared about.’’ 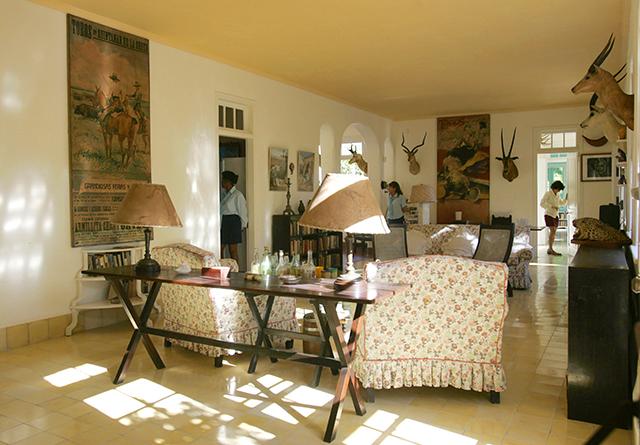 REUTERS/Enrique De La Osa
This is where Hemingway spent most of his winters, from 1939 to 1960, when his mental and physical health broke down.

He also cared, deeply, about Cuba and the Cuban people. The novel that won him the 1954 Nobel Prize for Literature, “The Old Man and the Sea,’’ was set in Cuba and is still taught in Cuban schools.

You can find copies of it, in Spanish and English, in bookshops all around the island, but the most picturesque source is at the Plaza de Armas, the small, tree-shaded square at the heart of Old Havana.

Booksellers and trinket dealers set up their stalls there every day. Browsing and bargaining are encouraged, whether what catches your eye is a child’s tattered schoolbook or bits of pre-1959 costume jewelry or cheap made-in-the-USSR plastic cameras left behind when the Russians went home in the early ‘90s.

Hemingway dedicated his Nobel prize to the Cuban people, but he met Fidel Castro only once, at the annual deep-sea fishing contest that still bears the author’s name. It’s said that Hemingway admired the young revolutionary, and the feeling must have been mutual because the Cuban government continues to protect Finca Vigia.

“Protect’’ isn’t accurate enough. “Preserve in amber’’ would be better, since virtually everything in Finca Vigia is kept as Hemingway left it, from the shoes in his bedroom to the magazines in the living room and the African hunting trophies on the walls.

So many small, personal curios are lying around, in fact, that the house actually looks lived in. Visitors are not allowed to walk through – you can only peer into open windows and doors. But this makes it easy to imagine that author is still at home, off in some corner you can’t see, perhaps planning his next safari or – better yet – still writing.

Yes, there are some, and if you speak Spanish, or your hosts speak English, sooner or later, somebody will tell you one. Here’s an example I heard this year:

OK, so it’s right after the Revolution — you know, New Year’s Day 1959, right after Batista flees and the Fidelistas march into Havana and take power. But now the victors have to figure out how to run the country.

So Fidel calls a meeting of his best men to decide who’s going to do what. They discuss it sector by sector, and the meeting goes on and on and on. Finally they get around to the banking system. 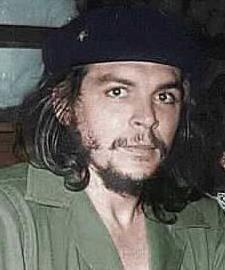 “I thought your background was in medicine,’’ Fidel says to Guevara, “but if you want banking that badly, OK.’’

Months pass, and the banking system is now in chaos. Fidel calls Che into his office and demands to know what the hell is going on.

Che just looks embarrassed. “You know, Fidel, when you had that meeting? And you asked if anybody was a good economist?’’

“Well,” Che says, “the meeting was so boring, I was falling asleep. I thought you said you wanted somebody who was a good Communist. And I’m a terrific Communist …’’