All over the world Thursday, Muslims celebrated Eid al-Adha (Feast of the Sacrifice), the Islamic festival that commemorates the willingness of Ibrahim (Abraham) to follow Allah’s command to sacrifice his son Ishmael. Allah ultimately showed mercy and Ishmael was replaced with a lamb, and thus an ancient tradition — and the phrase “lambs to the slaughter” — was born.

Eid celebrations traditionally call for the killing of the lamb to take place in a home ceremony, but in Minnesota, the killing and sharing happens for most metro-area Muslims at Jeffries Chicken Farm, a two-shack farm in Inver Grove Heights. Thursday morning, harried farm owner John Jeffries barked orders to farmhands and customers alike as he oversaw a steady stream of customers and the slaughter of hundreds of sheep.

“I’m so excited, because this is my first time here and I wanted to show my kids,” said a newly henna-festooned Iman Mahamad, who made the pilgrimage to Jeffries with her father, Mohmud, and her children. “We have to sacrifice for our prophet, and we have to do it on this specific day. It’s a joyful day.

“It’s a big feast back home in Somalia, and we get the goat and my dad cuts the goat and we have breakfast, dance, get gifts, all the kids get candy and we get money from the relatives. But here [in Minnesota] we have to come here. We had to get the goat ahead of time, and we don’t only do a goat, we do a cow, a sheep, whatever you can afford.”

It was a bloody scene in the farm’s cramped quarters Thursday, but also convivial and reverent. Men stoically corralled and the sheep and slit their throats, while Minnesotans hailing from Morocco, Egypt, India, Somali, Tunisia, Cameroon, Senegal, Nigeria, and other places bustled through, looked on, and joined in on the hauling of carcasses.

“This is all for our religion,” said Daha Abdala, a Sudanese immigrant who lives in Bloomington, wielding a knife and waiting his turn to slaughter his lamb. “This is the right way for peace, and freedom and everything.”

Muslim tradition has it that after the slaughter, the lamb’s meat is shared with the poor, family and friends, though to be sure, Eid sacrificial ceremonies have a much different feel at Jeffries Chicken Farm than in the Muslims’ native lands. 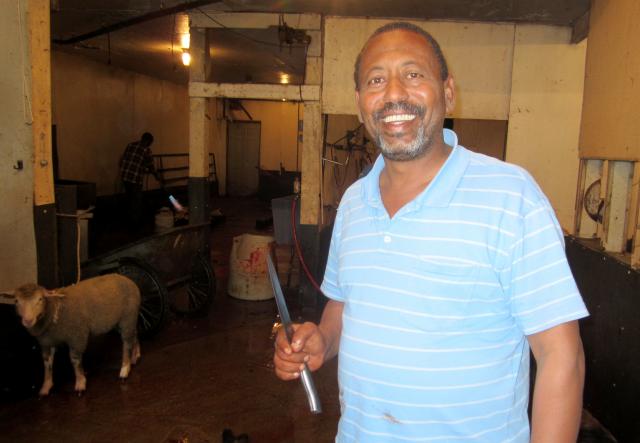 MinnPost photo by Jim Walsh
“This is all for our religion,” said Daha Abdala, a Sudanese immigrant who lives in Bloomington, wielding a knife and waiting his turn to slaughter his lamb.

Simo Alousch, a Moroccan-born South Minneapolis resident who made the trek to Jeffries with his son, Ilyas, and closely monitored his family and friend’s Eid celebrations around the world via his smart phone, noted, “It is against the law to take your own lamb to your house and do that, but this is how all the Muslims all over the world do this: You buy your own lamb and you take it to your house and you do everything at your house with the family.

“We like to do it in the richest way, not like this. You need to read some verses from the Quran before you touch the animal.

“You have to be very proper. You have to take a specific shower, and clean yourself. There are ritualistic things you have to do to be that clean person before you kill that lamb.

“In Morocco, my dad used to do it. You do that lamb for your kids. I do it now myself. You just slit the throat, and then there’s a guy who takes off the meat. But it’s not about the food, it’s about the sacrifice.” 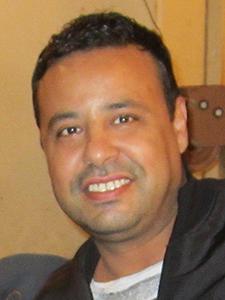 Alousch has been coming to Jeffries Chicken Farm to procure his lamb for ten years, but he said he and many other Muslims dream of an alternative that better reflects his religion’s ways.

“Here in Minnesota, it’s not like you’re in a Muslim country. It’s a big difference,” he said. “It’s a big problem, actually, because there are no farms that are taking care of these events and rituals. … The slaughtering is the most important thing that happens after the prayer, and the families all get together. It’s like Thanksgiving. I do it because I’m a moderate religious guy. I’m the only guy fasting in my [South Minneapolis] neighborhood, but it’s OK. I’m fine with that.”

Another Morocco native, Hishem Eblouze from Vadnais Heights, nodded as Alousch spoke. With three sheep carcasses at his feet and blood covering the cement floor, a beaming Eblouze said, “We do this to ask god for forgiveness, and we celebrate with our brothers and sisters who are in Mecca.” 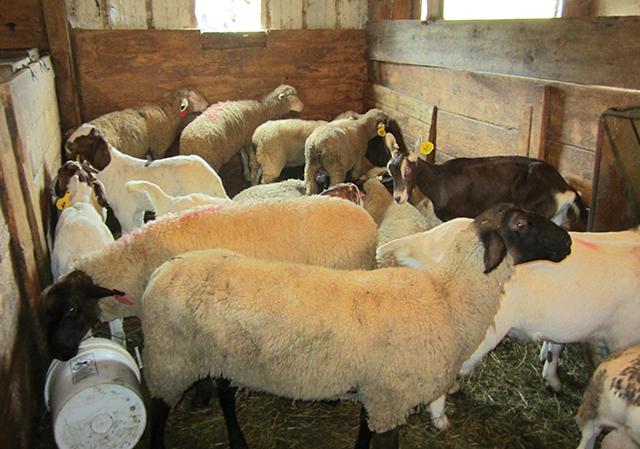 MinnPost photo by Jim Walsh
In Minnesota, the killing of the lambs happens for most metro-area Muslims at Jeffries Chicken Farm, a two-shack farm in Inver Grove Heights.