The following is an excerpt from the new book "Downtown: Minneapolis in the 1970s," photos by Mike Evangelist, text by Andy Sturdevant. Reprinted with permission from the Minnesota Historical Society Press.

To those who didn’t live through it — I count myself in this number — the downtown Minneapolis of the 1970s may seem quite unfamiliar. It doesn’t, however, seem alien.

I’ve seen footage of the old old Minneapolis from after World War II, the street scenes best captured in Johnny Rex’s 1950s-era Super 8 movies of the old skid row, which you may have come across at some point. That’s a Minneapolis that looks completely alien today, as vanished as Pompeii.

As unfamiliar as the Minneapolis of the 1970s looks, it is still broadly recognizable as a very early version of the contemporary city of today. It’s recognizable in the same way photos of your mom and dad at age twenty-two are today. Sure, they’re a little grayer and more wrinkled now, but you can still see it’s them in the brow line and the bone structure and in the eyes.

In many of these Minneapolis scenes, the names on the stores are different, but much of the infrastructure is the same. Demographically, the city seems whiter and older than it seems today—or maybe older people just looked older back then—but there is much that is unchanged. People cluster under shelters waiting not for streetcars but for buses. Nicollet Mall, despite some cosmetic differences, is firmly in place by this time. Although Dayton’s is now Macy’s and Young-Quinlan is now a jewelry store, the buildings are the same. The IDS Center towers over everything, and though its two 1990s-era skyscraping siblings aren’t on the scene yet, we can look at a photo of Nicollet Mall in the early 1970s, presided over by the fifty-five-story building, and still generally orient ourselves. As I said: unfamiliar, but not alien. 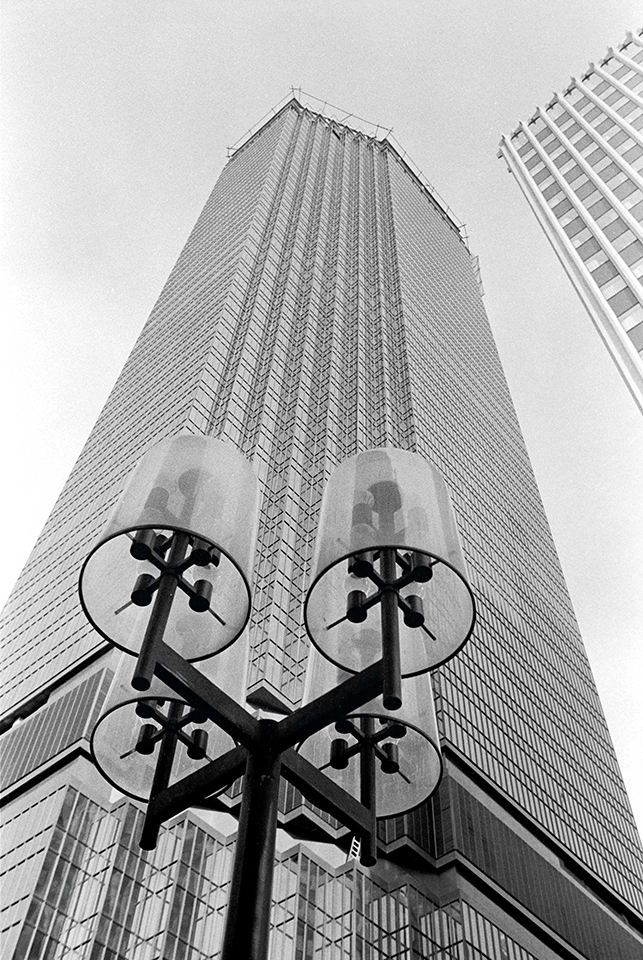 Photo by Mike Evangelist
The IDS Center towers over everything.

Downtown of that era still retains many of its midcentury neon lights and hand-painted signage, but these seem to be disappearing quickly, edged out by digital displays and more contemporary-looking billboards. The architecture seems caught between eras. The Gateway District of Johnny Rex’s skid row movies is a decade gone, and the more modern glass-and-concrete skyscraper architecture we associate with downtown today is already starting to crowd out brick storefronts and ornate stone facades.

Take a shot like the one of Seventh Street near Hennepin Avenue depicting three somewhat worse-for-the-wear businesses: the Greeting Card Center, Millie Owens’ Wigs and Things, and the Adonis Tie Shop. Aside from the psychedelic displays in the window of the card shop (and the bell-bottom jeans and long hair on the waiting customers), it looks right out of the 1940s. That is, until you look to the left of the frame and see the cast concrete tower looming there. It’s that “Park and Shop” garage that now has the Foot Locker and the Team Liquor Wine and Spirits shop. 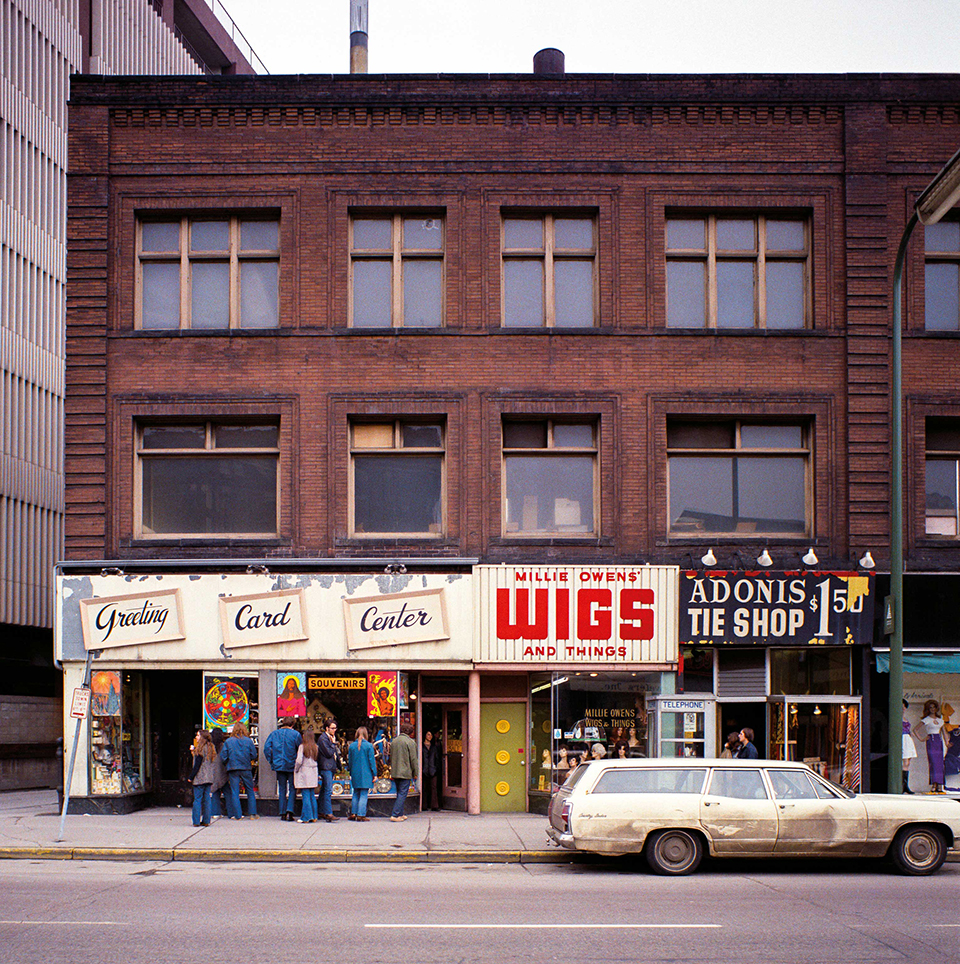 You may know the one. It’s still there today.

In the end, it’s the Park and Shops that defeat the Millie Owens’ Wigs and Things and Adonis Tie Shops of the world. Some of the buildings depicted in these pages would be torn down post-1970: Donaldson’s (replaced by Gaviidae Common after it burned down in 1982), the World Theater, Venice Cafe, and all the rest of the old Block E (torn down in 1988 and turned into a surface parking lot before being replaced by the new Block E structure in 2001, transformed into Mayo Clinic Square in 2015), and Powers department store (replaced by Dain Rauscher Plaza in 1992). 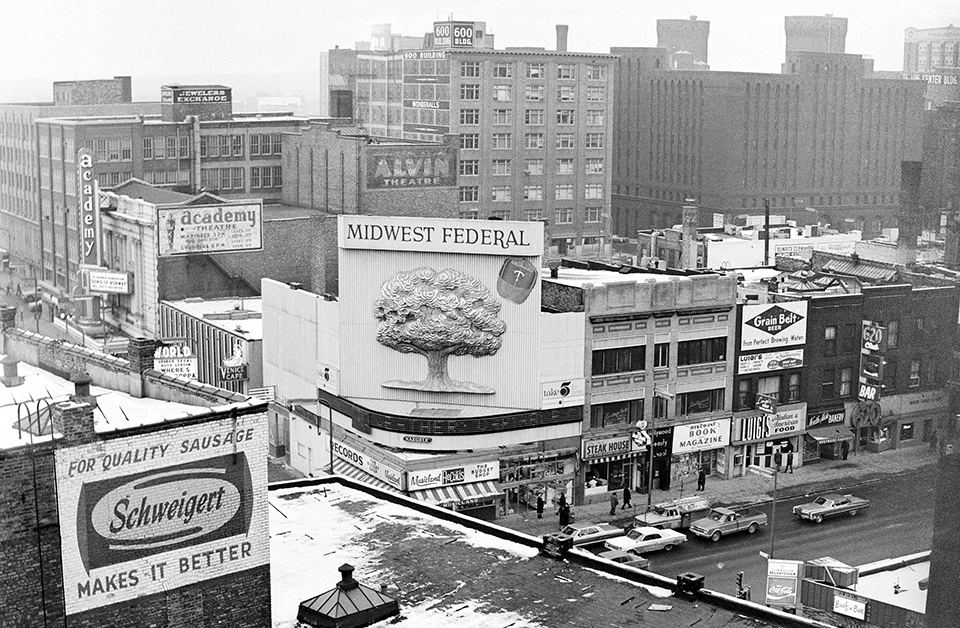 Photo by Mike Evangelist
Block E at the intersection of Seventh and Hennepin.

However, upon some reflection on Millie Owens’ and Adonis, you can also see that while those businesses are gone, the charming brick building that housed them still stands. This building was home to the Taste of Thailand restaurant for many years, until it closed in 2015. There’s little doubt that a new restaurant will open in that space in short order. As a piece of real estate, it’s too valuable for anything else to happen. While the signage has changed, it’s unmistakably the same building, and vacant or not, it’s most likely not going anywhere. Despite the obvious exceptions noted above, by 1970 most of the physical infrastructure that was going to be torn down had already been torn down. The vast majority of that was done in the 1950s and ’60s. By the early 1970s, if you were an old building downtown and you’d managed to avoid the wrecking ball up to that point, you had a fighting chance at sticking around for another forty years. 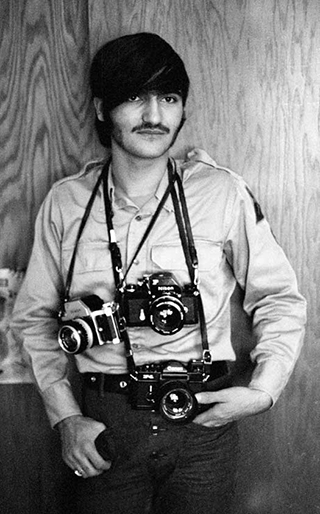 Mike Evangelist with the tools of the trade, in 1971.

This isn’t to downplay the incredible out-of-time quality of the photos collected here. The city has transformed greatly since these images were snapped. But it’s also that very quality of these images seeming just out of reach that makes them so appealing. I used to catch a bus at Eighth and Hennepin, a streetscape captured in one of Mike’s photos. I used to stare down this same vista, past the Orpheum and State Theater to the Plymouth Building on Sixth Street. I look at this photo, and while the signage and billboards are unfamiliar, the underlying bones of the buildings and city streets are not. It’s like peering at a recognizable scene through a thick veil of fog.

A launch party for the book and an opening reception for the companion exhibition “Downtown: Minneapolis in the 1970s” will take place tonight at the Mill City Museum. In the Mill Commons, from 6 to 9 p.m. Free. Remarks by Mike Evangelist and Andy Sturdevant at 7 and 8:30. Cash bar and food available for purchase. 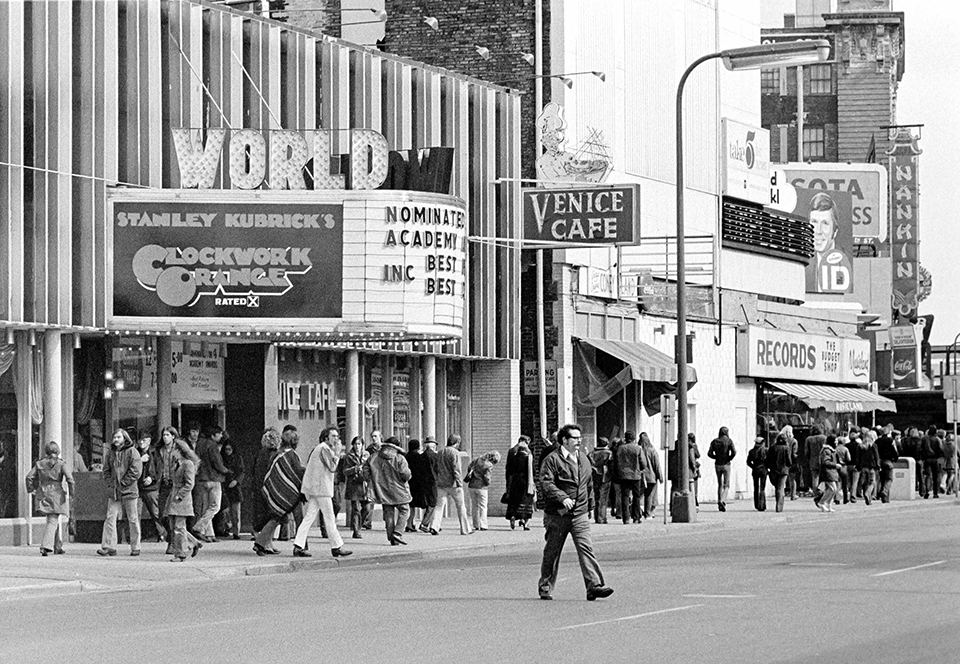 Photo by Mike Evangelist
“Clockwork Orange” lets out at the World Theater on Seventh Street, March 1972. 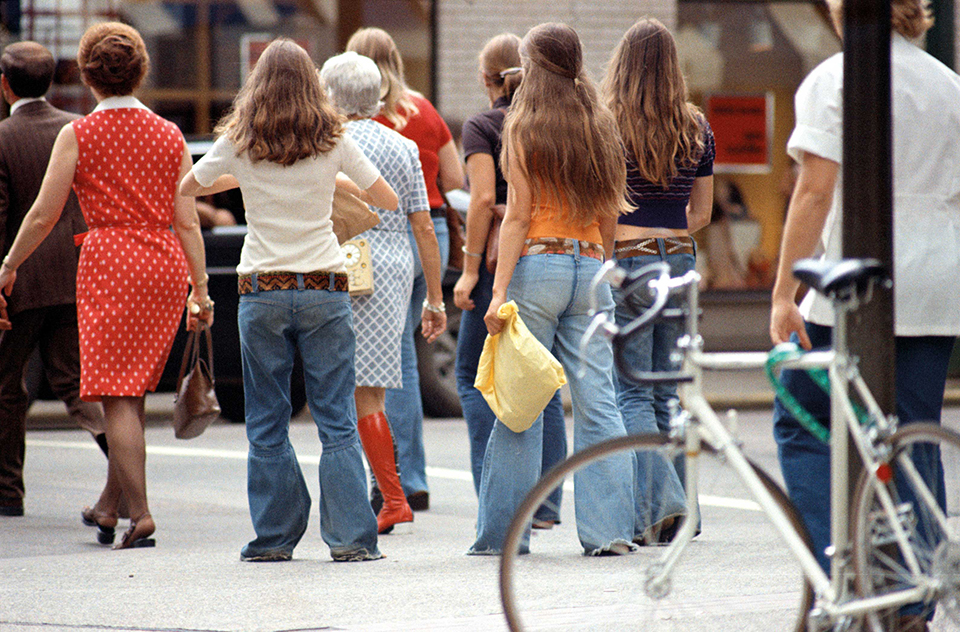 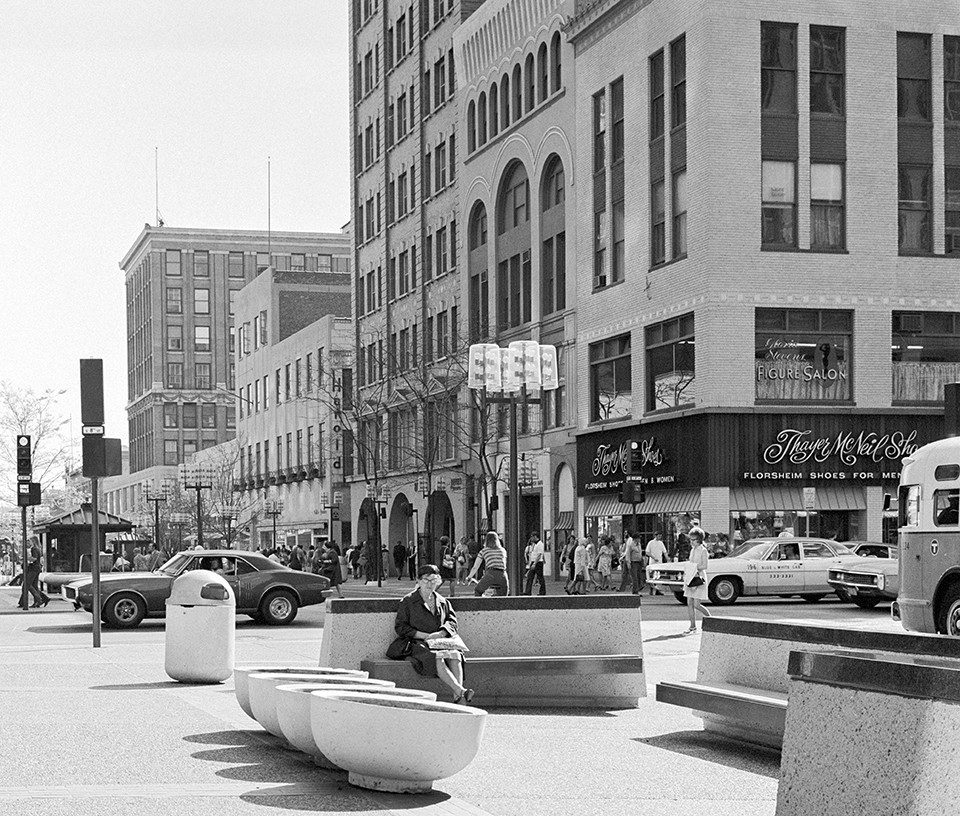 Photo by Mike Evangelist
Action at the corner of Eighth and Nicollet. 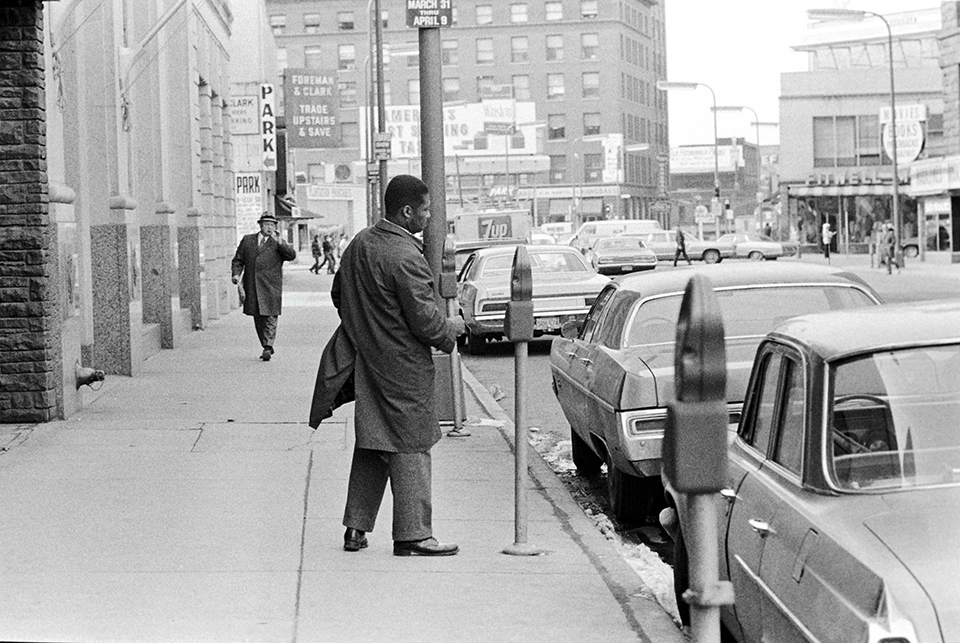 Photo by Mike Evangelist
Plugging a meter on Fifth Street, near Hennepin Avenue.

‘Downtown’: Mike Evangelist’s photos of Minneapolis in the ’70s

By Andy Sturdevant and Mike Evangelist