On Jan. 21 I stood at Paisley Park, watching Prince breeze through his brilliant one-night-only piano-and-a-microphone show. Over the course of two hours, the Minneapolis-born music genius made like his hero Mozart, singing and playing his heart out, bouncing giddily up from the piano bench, dancing, strutting, and rocking – all without the power or safety net of one of his legendary funk ‘n’ roll bands.

“This is the first time I’ve done a concert alone, ever,” the pink silk-clad little love god told the crowd of about a thousand. “And you’re here the first night. Congrats to both of us.”

To be sure, I felt lucky to be there that night, the last night I saw him live, as I did so often over the past four decades, bearing witness in small clubs and big arenas to the legend and legacy of Minneapolis’ favorite son who put “Uptown” on the map as some utopian neighborhood where “black, white, Puerto Rican” all got along. As was often the case with Prince, the piano-and-microphone show felt like the beginning of yet another exciting new chapter in his storied career, another new incarnation for an artist whose changeling ways came to him as naturally as the change of seasons come to his beloved Mother Earth.

That night, just 12 short weeks ago, Prince was so spry, so ageless, he could’ve been that kid I first saw playing pick-up basketball at Martin Luther King, Jr. Park in 1975, or the first time I saw him live, with his “Dirty Mind”-era band at Sam’s in 1980. At Paisley in January, with a massive afro and a yogi’s body so limber it was obviously imbued by the music that has flowed through it since birth, he looked like he’d outlive everyone in the room, and the world.

On a rainy Thursday in Minnesota, with KMOJ and the Current devoting their playlists to Prince, and as word spread around the globe that Minnesota’s most beloved export had shuffled off his funky mortal coil, the main feeling I and most everyone around these parts registered was a deep gratitude for having resided in the same orbit as one Prince Rogers Nelson; for rubbing elbows with him at one time or another; for seeing him in concert or at the record store, the movie theater, at Paisley, First Avenue, or just making dinner or love to the music of His Royal Badness, as writer Martin Keller so perfectly anointed him in the ‘80s.

“He was ours,” went Thursday’s refrain on social media, over and over again, and the rest of the world will have to forgive our provincial grieving at least for the moment, because Minneapolis and Prince were joined at the hip, now and forever. 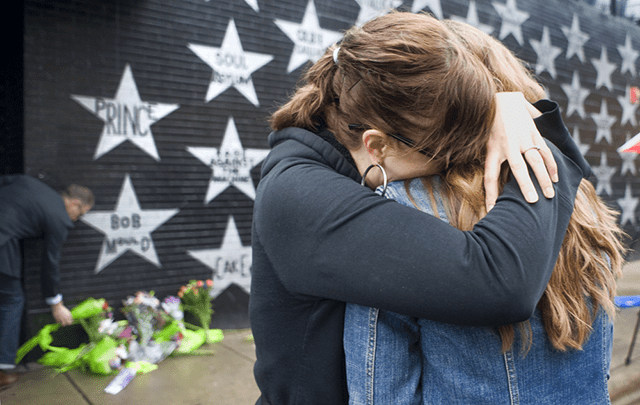 Photo by Tom Olmscheid/Workingpress Photo Agency
Kari Sharff, right, hugs her sister Annie Sparrows, left, (both of Minneapolis) as they became emotional after arriving at a memorial for Prince outside First Avenue in downtown Minneapolis on Thursday.

As a music fan, it was surreal and thrilling to bear witness to Prince’s ascent in the ‘80s. My friend Chrissie Dunlap at First Avenue would always alert me to the last-minute shows he’d stage with his “Purple Rain” and “Sign O’ The Times” bands, spoiling me for live music forever, and introducing me to that rare and raw electric exchange between band and audience that happens with a world-class funk band.

From then on, I was hooked, catching Prince every chance I could — in 1981 at an amazing free-form jam the night after the “Controversy” tour stopped at Met Center; in 1983 at the Minnesota Dance Theater performance at First Avenue, where much of “Purple Rain” was recorded; in 1984 the week “Purple Rain” was released; in 1987 at a warm-up for the “Sign O’ The Times” tour; at Glam Slam in 1990 working out material for “Graffiti Bridge,” and on and on and on …

As a music reporter for City Pages and the St. Paul Pioneer Press, I was thrilled to spend late nights at Erotic City, Glam Slam, and Paisley Park with him, chronicling an era that, incredibly, seemed to be happening well under the radar. In 1994, after I wrote about all these new songs he and his New Power Generation band was coming up with, he asked me to write the liner notes to his terrific 1995 album “The Gold Experience,” and what I wrote then reminds me of Prince’s penchant for alternative spirituality, and serves as some sort of balm on this stunningly sad day:

Above all, Prince wants it known that this is a record about the fight for freedom — personal, artistic, political — but anyone with half an ear can suss that much out. During the making of it, he was enamored with Betty Eadie’s book “Embraced by the Light,” a first-person narrative on near-death experience, and that theme also peppers the record, most explicitly on the reincarnation dream “Dolphin.” It is also implicit on several other tracks that ponder birth, death, life, and rebirth, and one man’s own expectations and perceptions of himself.

More than anything, throughout my own Gold experience, I heard a unique, and uniquely potent, mix of purpose, celebration, and fear. There is a palpable sense of urgency here, as if Prince knows that time is running out for all of us to make connections with ourselves and the outside world. Don’t believe me? Listen to the scream in the middle of ‘Endorphinmachine’ or the guitar solo on ‘Gold’ that concludes the album. The two things they share are desperation and liberation. Listen. Cue ’em up, back to back. Hear it? He isn’t showing off; he’s searching. Again. And like never before.

That was Prince, throughout his career, and that’s what we mourn today — the loss of an eternal seeker, which all great artists are at heart. Over the years, I was also lucky to have had a few conversations with him, and he was regularly brilliant, funny, warm, wise and wonderfully self-contained. His smile was mischievous and miraculous, and at the moment I’m finding it hard to believe we’ll never see it flash again. 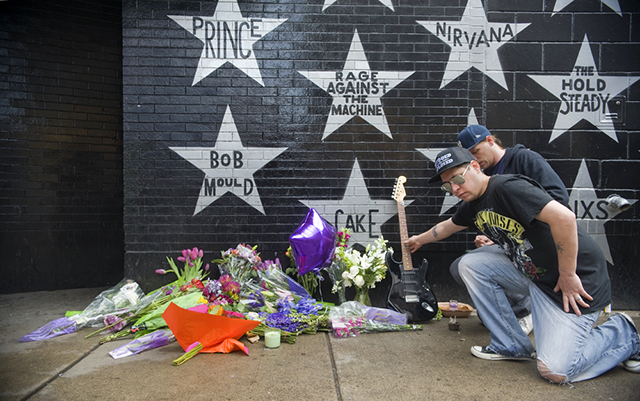 Photo by Tom Olmscheid/Workingpress Photo Agency
Christopher LaCroix, of Minneapolis, leaves a guitar at a memorial under the Prince’s star on the side of First Avenue on Thursday.

We’ll also miss his worldview, and his wisdom. This is from an in-person interview I did with him at Paisley on the eve of his “Emancipation” record release:

Q: What has [pending] fatherhood meant to you, creatively?

A: I don’t know if I know yet. What I do know is that it makes me conscious of, more than anything, education. The first time I saw a person of color in a book, the person was hung from a tree. That was my introduction to African-American history in this country. And again, going back to doing the total recall that I did, I know that that experience set a fire in me to be free.

You know that song, ‘Let It Be’? There’s a lot of heaviness in that song. We should pay attention to that. If I was in charge of the government, I would make it mandatory that, at least once a year, we have a Chill Day–where everybody just kicked back and watched. Everybody’s so caught up in (the rat race), that we never really sit back and watch.

Q: You, of all people, seem to be in need of a Chill Day. You’re so prolific, it’s like you’re working all the time. Haven’t you ever wanted to take some time off, like other artists do, to let the muse percolate a little bit?

A: I don’t work that way. I am music. I feel music. When I walk around, I hear brand new things. You’re almost cursed. You’re not even (its maker), you’re just there to bring it forth. You know, ‘Can’t I go to sleep?’ No. You can’t. But OK, now you can. And you go to sleep, and you don’t hear it, and then you’re lonely. No one wants to be on Earth alone.

And it all, always, comes back to God. We are all down here to work toward one thing—love.

Thanks, Prince, wherever you are. I was crying when I wrote this, so sue me if I went too fast.

‘He was ours’: Mourning the loss of Prince, music genius and eternal seeker