I’ve been known to be an extremely expressive clapper and enthusiastic demander of encores at live music shows, so I suppose it was in that spirit that, even after Prince orchestrated from, yes, “the after world,” one of the greatest three-day parties any American music city has ever hosted, by Sunday night I wanted more, and something more personal.

To be honest, like most of the world, I’d spent three days sobbing, singing, dancing, writing, and remembering how hard and long we pogoed and writhed to those fast, funky, fantastic records Prince pumped out in the ‘80s and beyond. “He was our northern star,” a choked-up Martin Keller poetically told CNN.

“We walked the same streets… he was like a ray of light in a very cautious place,” fellow ray of light Paul Westerberg told Rolling Stone.  “I thought I was going to grow old with him,” Sheila E told the Star Tribune, and didn’t we all?

As I read and watched the tributes and myriad stories about the man’s generous spirit with gifts and donations and autographs, and as an avalanche of tear-strewn tales about Prince shows and sightings came over the electronic transom, I kicked myself for not being more memorabilia-conscious, so late Sunday I set about gathering my scant few prized Prince possessions, collected mostly from when I covered him for the St. Paul Pioneer Press in the ’90s, now scattered amid eight boxes in my semi-organized basement archives.

I had no idea what I was looking for, but with all those sexy songs ringing around me, I hoped I had an artifact or some holy talisman that could help fill the hole in my heart that had been there and growing since hearing the still unbelievable news that Prince is dead. I got down on my knees and started digging around in boxes stuffed with photos of friends and family, newspapers, and lots of music memories. An hour later, I found it.

It had been a surreal, sad few days for everybody. Let the record show that not only did a rainbow appear over Paisley Park in Chanhassen Thursday afternoon, but everything was coming up Princely purple Friday afternoon in Minneapolis, with lilac bushes blooming and purple passions exploding everywhere. As hundreds of thousands made pilgrimages to First Avenue and Paisley, others hunkered down and massaged their broken purple hearts with private listening parties.

Others danced all night, sported purple fingernails, purple tattoos, purple clothes, and wrote purple prose all over the Internet, howling an unprecedented sadness at the wicked hot knowledge — intellectually, spiritually, musically, soulfully, and funkily — that such a blazing flame, our little love god, as I often referred to him in print, had been extinguished far too soon.

After writing a fast eulogy Thursday, and after singing Prince songs with friends Thursday and Friday nights away from the parties, I immersed myself in Prince all weekend. I monitored the stories and outpouring of grief, and drank in one amazing clip after another of live performances.

I watched “Purple Rain” in all its sexy rocking dopey misogynistic glory on MTV and the excellent if overlooked 2014 documentary “Slave Trade: How Prince Re-Made the Music Business” on AXS.

Throughout it all, I thought fondly of my time covering Prince – or the Artist, or [Prince symbol] as he was going by then – for the PiPress. It was a time when he was at war and seeking his freedom from Warner Bros., which inspired tons of backlash from the press and nonfans, but the fact is, those years also produced scads of great music with his supremely funky band the New Power Generation (Michael Bland, Sonny Thompson, Tommy Barbarella, and Morris “Mr.” Hayes). I wrote extensively on his under-the-radar late-night live shows and his records “Come,” “The Black Album,” “The Gold Experience,” “Chaos and Disorder,” “Emancipation,” “Crystal Ball,” “The Truth,” and more, and was honored and inspired to do so.

Like so many Minnesotans, I felt lucky to grow up in the same town and the same time as Prince, and the few times we hung out together I felt, like everybody who ever heard his music, truly connected on a music and soul level. If you know anything about me you know that I am not exactly the most distanced music reporter or objective observer; “write about what you love” goes the writer’s adage, and so I do and did, and Lord knows I love Prince.

Personally, we were the same age, and the product of almost the same neighborhood. In the late ‘70s when he was learning his genius trade at Central High School, I was writing and editing the school newspaper at De La Salle High School. We both loved music, basketball, and Minneapolis, and I have fond memories of laughing and sparring with him in the ’90s. “You got your [basketball] shoes?” he said at one point out at Paisley, during a playful two-hour discussion of one of my less-than-gushing columns about him, challenging me to a game of one-on-one that never happened but I always hoped would (similar summoned-to-Paisley bull sessions happened to several writers, including Jon Bream, Melissa Maerz, and Andrea Swensson).

Anyway, as so often happens with sudden death, I felt a need to gather up everything I could find in my fan’s archives and hold it close. I pulled together all my Prince vinyl, CDs, cassettes, and bootlegs, and spent the next few hours reading articles and liner notes and listening to The Current, whose all-Prince playlist provided a soundtrack for the funky shiva that the world gathered around all weekend.

I went through the boxes, some of which I hadn’t touched since the ’90s, and was happy to discover I’d saved some good stuff: press releases for all sorts of events, including the Valentine’s Day 1994 release of “The Most Beautiful Girl In The World” single. Magazines, including copies of the old Controversy fanzine, Neal Karlen’s Rolling Stone cover story, various Prince-related Village Voice Pazz and Jop polls, and cover stories from Vibe, Jet, Billboard, and SPIN. Catalogs from the old New Power Generation retail store in Uptown.

A short-lived CD-ROM experience called “[Prince symbol] Interactive” and the floppy disc with the software used for translating the Prince symbol into newsprint. The notebook and pencil I used to interview him, and hard copies of the three interviews I did with him. Napkins from the “Emancipation” CD release party and a napkin from the 1996 Prince-Mayte wedding reception, fashioned for the one-night-only bash with a combo ‘M’ and Prince symbol.

A small box of his favorite cereal, Cap’n Crunch, bowlfuls of which he’d provide guests with at his pajama parties. A press laminate from the 1994 NBA All-Star game party at Paisley Park, probably the most star-studded night in the studio’s history. A beautiful booklet/program from 1995 with my liner notes from “The Gold Experience” that I never knew existed; a cool one-sheet for the “Rock ‘N’ Roll is Alive (and it lives in Minneapolis)” single; some ticket stubs and a few photos, but it wasn’t enough. Nothing special.

I kept digging, and with every found bauble and reignited memory, I thought about what he meant to me. How his individuality, single-mindedness, sexuality and musicality so organically shaped me, how influential he was to me and so many people I know, and how proud I was of being from here, in part because of him. Just as the tears and weariness were getting the best of me and I was about to turn in, I looked in one last box.

There, sitting on top of some pictures and cassette tapes, was an envelope with my name on it, written backwards in purple pen. I have almost zero recollection of receiving it, other than it being sent to me at the Pioneer Press office around Christmastime in the late ’90s. Inside, I found a piece of typing paper signed by all the members of the New Power Generation, including Prince and Mayte, and a card with two photos of Prince on the cover and the Prince symbol.

I opened it up and there, scrawled in purple pen, was a peace sign and the message, “and be wild.”

I held it in my hands, amazed one more time, and couldn’t help but think that Prince had planned it exactly like this — that from “the after world” he’d make me grin and wonder yet again. And as these mournful days march on, more hidden Prince messages are sure to be discovered and deciphered, but “peace and be wild” is the one he left me with, and I swear to the little love god I’ll never forget it. 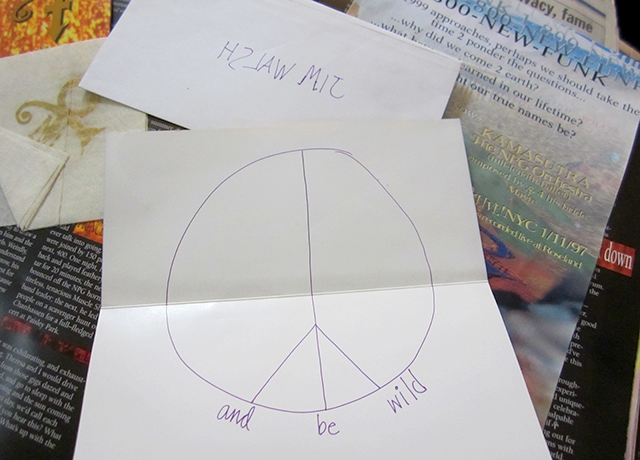 MinnPost photo by Jim Walsh
To Jim Walsh from Prince: “peace and be wild”

Prince: ‘Peace and be wild’