By now many of us are familiar with the Torrence family and their scary winter at the ghost-ridden Overlook Hotel in the mountains of Colorado.

Jack, a former teacher and recovering alcoholic, grows increasingly — and uncontrollably – homicidal. Prompted by the ghosts, Jack threatens to kill his wife, Wendy, and their child, Danny, who has the gift of the “shining,” which is to say that Danny is psychic. He reads minds and sees into the blood-drenched future.

Published in 1977, “The Shining” is the novel that made Stephen King famous as the master of page-turning horror stories. Stanley Kubrick’s movie version, released three years later, starring Jack Nicholson in what is surely his most electrifying performance, became an instant classic, the stuff of bad dreams and a work much imitated.

And now in its latest incarnation, the Torrence family sings. (The ghosts sing, too, acting as a kind of chorus.) Saturday night at the Ordway Music Theater Minnesota Opera will premiere an opera version of “The Shining” with music by Paul Moravec and libretto by Mark Campbell. (See Pamela Espeland’s Q&A with Campbell here.)

Based on the book

The work and its production are much anticipated. As of two weeks ago, all performances are sold out. (Standing-room tickets and/or turnbacks may still be available.) The company’s well-funded New Works Initiative, of which “The Shining” is an example, has propelled Minnesota Opera to the forefront of progressive-minded companies who are developing new operas in an effort to enliven the art form. The national media, it is expected, will take notice. And one of the things they will notice is that the opera is based on the book, not the movie.

The idea of an opera on “The Shining” was born in a restaurant in New York in 2010. Dale Johnson, the company’s artistic director, was tossing around ideas about new operas with Eric Simonson, a writer and director who was to become a significant figure in Minnesota Opera’s creation of new works.

“I had the idea of doing something in the horror-thriller genre,” Johnson recalled. “We don’t see much of that in contemporary opera. I was thinking of things like Wagner’s ‘The Flying Dutchman.” He had been trying, in fact, to secure rights to King’s “Dolores Claiborne,” which San Francisco Opera eventually got hold of and premiered in 2013. Simonson, a King fan, suggested “The Shining.” Johnson resisted the notion, thinking the story would rely too much on special effects that would be difficult to stage. But he agreed to re-read the book when he got back to Minnesota.

“I re-read it – it’s one of my favorite books, actually – and all of a sudden the opera appeared out of it,” Johnson said. “It’s scary as hell. But it seemed to me it’s less about spooks jumping out at you and more about this horrible thing that’s happened to Jack Torrence. This guy has spent his life struggling. He’s an alcoholic, his father abused him, he hit his son and one of his students, his marriage is falling apart. I thought, ‘That’s a good opera right there. How does he save his family? Sure, there are terrible things happening at the Overlook, but a bigger part of it is Jack and Wendy trying to save the family. That was fascinating. I hadn’t even thought about that when I read it the first time.”

As far as enlisting a librettist and a composer, Johnson knew – and trusted – Campbell, who was already working on “Silent Night,” and he admired Moravec, whose opera “The Letter,” based on the play by W. Somerset Maugham, he had seen – and liked – at the Santa Fe Opera in 2009. “Paul is what they call a ‘neo-Romantic’ or a ‘neo-tonalist,’ ” Johnson said. “I wanted ‘The Shining’ to have a Romantic quality, not some angular, atonal thing. I wanted people to feel for Jack and Wendy.”

He contacted Moravec, who, when he read the novel had the same reaction Johnson did. “Opera is about three things: love, death and power,” he said. ” ‘’The Shining’ has all those elements plus an incredibly well-made narrative and strong characters.”

Work didn’t begin for a couple of years. Campbell wrote his libretto for “The Shining” in just a couple of months in 2013 during which time he and Moravec, both of whom live in New York City, were in constant contact.

Moravec, who teaches at Adelphi University on Long Island, began composing the music in January 2014. Opera, he said, is the most difficult form for a composer. “This one, though, was a joy to write. I don’t write quickly, but I write consistently – every day. The difficult thing for me in this opera was the second act because it’s so dark. I had to go into this really twisted part of myself, a very dark place. I’m like a method actor. I have to feel in my own central nervous system what the character is feeling. If Jack Torrence is feeling this incredible homicidal rage, I have to feel that – in a safe way – myself. Otherwise it doesn’t work.”

He gave each character a leitmotif – an identifying theme – and what he calls a specific “sound world.” Even the hotel, representing the world of the ghosts, has its own sound, signifying an evil presence. And following the practice of Benjamin Britten in “Peter Grimes” he wrote several orchestral interludes that are staged in pantomime and aimed at showing the passage of time.

“I think of the whole thing, the two acts, as one composition,” he said. “It’s like a concerto for voices and orchestra. In an opera the music drives the agenda, whereas in musicals it’s more of an equal balance with the book, the lyrics and the music.”

An odd problem arose during the writing period. As Moravec tells it, “It’s weird to compose an opera in which the protagonist is trying to kill his wife, Wendy, and it happens that my wife’s name is Wendy. She could hear me sitting at my piano, saying things like, ‘I’m going to bash your brains in, Wendy …”

The first draft was finished in a year, during which time a cast was lined up. Baritone Brian Mulligan, who sang the title role in the company’s 2013 production of “Hamlet,” will portray Jack, and soprano Kelly Kaduce, fondly remembered for her Tosca earlier this season and several other key roles, will sing the part of Wendy. Alejandro Vega, a fifth-grader at XinXin Academy Chinese Immersion School in Hopkins and already a veteran of several local theater productions, will take on the mostly speaking role of Danny. Bass Arthur Woodley sings the part of Dick Hallorann, a cook at the hotel who returns near the end to rescue the family.

In November 2014, the company mounted the first of three week-long workshops, allowing the creators, along with Johnson, Simonson and conductor Michael Christie, to make revisions. It’s a practice that Minnesota Opera does with all its new works. Moravec called the workshops “fabulous.” 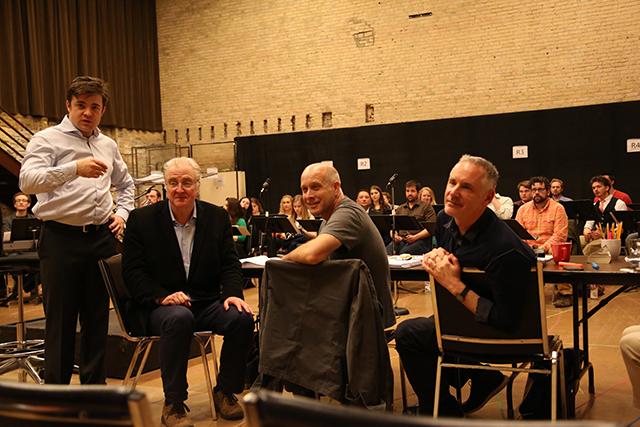 “There may be other companies who do this. If so, I don’t know who they are,” he said. The first two were done with piano accompaniment, the third with full orchestra. “Most companies, if they do them at all, don’t do an orchestra workshop because it’s so expensive,” said Campbell.

The opera changed a lot during the workshops, said Simonson. “They weren’t big changes. We didn’t, like, drop a whole scene or add one. But we all made suggestions as to what was needed to make the drama compelling. We just made a change today,” he said after a rehearsal about two weeks before opening night.

“One of the things I’m really proud of in the company’s New Works program is this openness to looking at how an opera is created,” he said. “Ten or fifteen years ago, it was standard for the librettist to write his libretto, mail it to the composer, who would write the music, then deliver it to the director, who would then stage it. That’s seldom productive.”

The biggest technical challenge in staging the opera, Simonson said, isn’t the blowing up of the hotel, which happens in the book but not the movie. “It’s the smaller things, like Jack getting stabbed in the back or when he busts a CB radio to bits. The hotel disintegrates in two minutes.”

In essence, the opera is a love story, a story of how love prevails between a father and a son, said Simonson. “That’s how Paul sees it, and I agree.” In the climactic scene of the libretto and the book – but not the movie – Jack breaks the cane that decades earlier his father had beaten Jack’s mother with, thereby saving Danny and ending the cycle of violence that has plagued the Torrence family for generations.

“I hope audiences will be carried away by the story and understand that Jack Torrence is vulnerable to a certain dark side in a way that all of us are vulnerable to many things,” said Simonson. “I hope they will want to go along on the journey with Jack and have empathy for him. After all, if it weren’t for Jack dying, his wife and son wouldn’t survive. It’s like the classic definition of tragedy: Something is given up — somebody sacrifices — so that others can survive.”

‘The Shining’: ‘In essence, the opera is a love story’