“Who would have thought that this little group from Minnesota would have generated a major world premiere? It’s unbelievable.”

Kevin Smith, president of the Minnesota Orchestra, was speaking to 119 guests at a banquet last Friday, Sept. 9, in the suburban town of Millbrae just south of San Francisco. The banquet, during which an army of waiters delivered a seemingly limitless round of Chinese delicacies – deep-fried milk, sea cucumber, bird’s nest soup, Peking duck – was a prelude to the main event the next evening, the premiere of “The Dream of the Red Chamber,” an operatic treatment by the San Francisco Opera of one of the landmarks of Chinese literature with music by Bright Sheng and libretto by playwright David Henry Hwang.

The seed money for this ambitious $3 million production, which will travel to Hong Kong in March, was raised by the Minnesota-based Chinese Heritage Foundation in an effort to introduce Western audiences to Chinese culture and in the process to promote mutual understanding.

“The great novels of Chinese literature are virtually unknown in the United States, outside of small communities of academics and Chinese speakers,” said Hwang, a Chinese-American best known in the U.S. for his play and subsequent film “M Butterfly,” which received the 1988 Tony Award for Best Play.

“I, too, as a native-born American, had never read ‘Dream of the Red Chamber,’ even though my plays and musicals are often set in China. Particularly because the evolution of the U.S.-China relationship is likely to determine much of the 21st century, this opera presents a valuable opportunity to expose audiences to a work that expresses the essence of China’s history and national character.”

The project arose out of a conversation between two friends, Pearl Bergad and Linda Hoeschler, in Minneapolis in 2001. Born in Vietnam of Chinese parents, Bergad, a retired molecular biologist, is executive director of the Chinese Heritage Foundation. Hoeschler, a long-time arts patron, is the former executive director of the American Composers Forum. 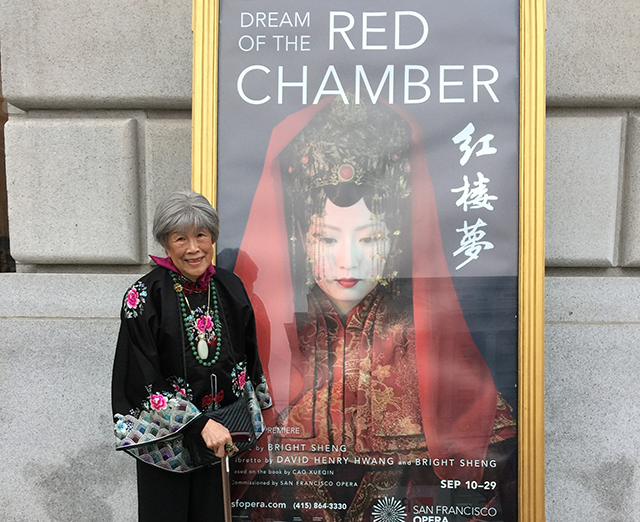 Courtesy of the Chinese Heritage Foundation
Ming Li Tchou standing next to a poster for “Dream of the Red Chamber.”

Both love the novel

“It turned out we both love this novel,” recalled Bergad, referring to “Dream of the Red Chamber,” Cao Xueqin’s epic five-volume tale of love – actually, many tales — amidst a prominent family’s spiraling decline. The work, published in 1791, has inspired numerous films and spoken dramas, two television series and many Chinese operas. But never before had the story made it to the international operatic stage – and never in English.

Hoeschler had read the novel in college. She and Bergad both thought the books would make a great opera, but the idea didn’t take flight until three years later when Ming Li Tchou, who today at 92 can best be described as the matriarch of the Twin Cities Chinese community, founded the Chinese Heritage Foundation as an effort to promote Chinese culture. The organization funds arts projects and puts on a two-day Passage to China exhibit every year at the Mall of America.

That year, Bergad mentioned to Tchou the creation of an opera on the “Red Chamber.” “Ming loved the idea and offered $100,000 right away,” said Bergad. The foundation, under Bergad’s guidance, began to raise additional funds, and the project began to take off in 2009 when Hoeschler enlisted the aid of John Nuechterlein, executive director of the Composers Forum. Then the group approached Smith, asking him to be a consultant to the project. He had just retired as general director of Minnesota Opera and was well connected to the opera world.

Smith was skeptical — at first

“I met with Pearl and Ming,” Smith said. “I remember thinking, ‘These are wonderful people, but this isn’t going to happen. This isn’t the way operas are produced.’ I was trying to figure out a way to let them down easily.” 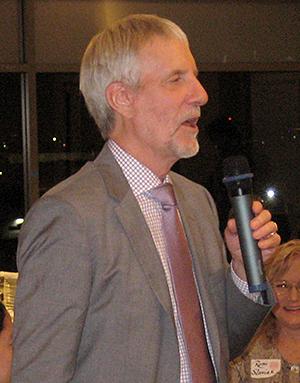 Despite his reservations, Smith approached David Gockley, general director of the San Francisco Opera, who said yes immediately, partly because of the large Asian population in the Bay Area. Moreover, Gockley was no stranger to new works for the stage. He’d brought to life many new operas during his years at the helm of the Houston Grand Opera, and more recently San Francisco’s premiere production of “The Bonesetter’s Daughter,” based on the novel by Amy Tan, had been a big hit.

The creative team Smith and Gockley assembled included Shanghai-born Sheng, a 2001 MacArthur Fellow who has spent most of his career in the United States. Sheng was 12 when he first read the “Red Chamber,” at a time during the Cultural Revolution when the novel was banned in China. He considers himself an amateur ‘Redologist,” that is, an expert on the novel.

(As an indication of native Chinese readers’ devotion to the novel, this writer got a short but learned lecture on the importance of the “Red Chamber” from a Chinese-born cab driver on the trip from the opera house to the writer’s hotel.)

Sheng brought in Hwang as librettist. They were friends who had collaborated on an earlier opera, “The Silver River.” The playwright and director Stan Lai was engaged to stage the work, and Tim Yip, an Oscar-winner for art direction for “Crouching Tiger, Hidden Dragon,” would be the designer. George Manahan, former music director at Minnesota Opera and a specialist in new music, would conduct.

Contracts took two years to settle. (The Chinese Heritage Foundation’s total contribution, which included money from the late Bruce Dayton, came to $250,000, which paid the commissions to Sheng and Hwang.)

“By 2013 I was wondering, are we really going to do this?” said Hwang. “This novel is twice as long as ‘War and Peace.’ It has 120 chapters and 400 characters. There are so many ways this could go wrong. But Bright had a vision of how to do it, what story to tell. So I said he should come on as co-librettist.” And that’s how the opera ended up being billed — both Sheng and Hwang as librettists.

As conceived by Sheng, the opera focuses on political intrigue and a love triangle involving a young and impetuous nobleman, Bao Yu, and two very different women: the frail Dai Yu, his soul mate, and Bao Chai, a young and beautiful heiress. The spiritual resonance is that Bao Yu is the incarnation of an ancient divine stone, and Dai Yu, a crimson pearl flower. Both seek to be human. The question becomes, as Sheng put it: Can perfect love exist in an imperfect world?

On Sept. 10 a near-capacity crowd, including 170 Minnesotans, took their seats in the cavernous 84-year-old War Memorial Opera House in order to find the answer to that question and to hear an important new opera. What they saw was a stunningly beautiful and picturesque production. Yip’s dreamlike sets are highlighted by painted panels that rise and fall to create various intricate patterns. The costumes are lavish and detailed.

Music is Western but with coloristic touches from Asia

As is characteristic of the 60-year-old Sheng’s music for the theater and the concert hall, the essential idiom of the opera is Western but with coloristic touches from Asia, most prominently in this case, the exotic sound of the qin, a Chinese zither. The vocal lines, though perhaps overdominated by high notes – a Sheng trademark — are gracefully written, and Sheng’s orchestrations are customarily lush and inventive. The young cast was uniformly strong.

Running 2 hours and 25 minutes, the opera can’t be called long, though the first act seems slow at times, possibly because the tempos of the scenes don’t vary much. Perhaps the opera’s narrator, a monk who is perhaps also the author of the novel – a clever touch by Hwang – could take on some of the exposition that seems to slow down the first act. (Sheng said the next day that he expects to make subtle changes in the score before it goes to Hong Kong.)

In the tender final scene, Dai Yu departs this world during a melancholy chorus: “When spring has fled, and beauty is spent, who cares for the fallen petals? Both flower and maiden return to dust.” The thought is typically Chinese: Life is impermanent and all existence is evanescent. 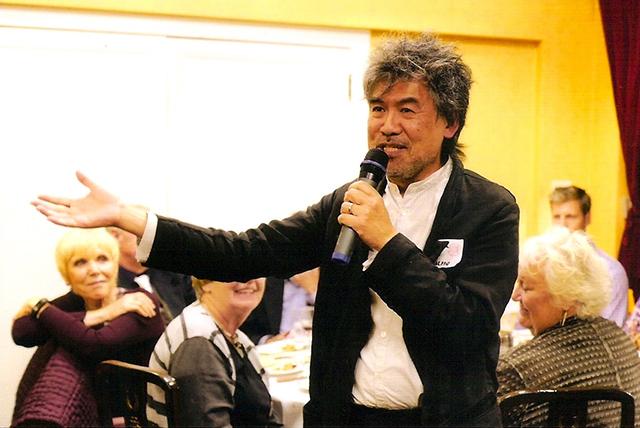 Among the Minnesotans present Saturday night was Ann Waltner, a professor of history at the University of Minnesota who is author of a free online course on “Red Chamber.”

The audience included Roxanne Denysiuk, a retired interior designer, and Anna Murray, who’s in commercial real estate. From Minneapolis, they’ve been friends since the seventh grade. “We both love opera, and we thought this would be a good experience, and it was,” said Murray. Denysiuk had just finished the third of the five volumes of the “Red Chamber.” She plans to take Waltner’s course, she said.

Ken Lau, another Minneapolitan in the house, is treasurer of the Chinese Heritage Foundation. A retired accountant, Lau first visited San Francisco in 1965 when, at the age of 19, he arrived from Hong Kong – 19 days by steamer – with six suitcases. Then he traveled by Greyhound bus – three days and two nights – to Minneapolis, where he enrolled at the University of Minnesota.

“I believe in the Heritage Foundation and its idea of bringing Chinese culture to America,” he said.

Another foundation supporter who had come for the opera, Greg Hugh, a Chinese-American born in Chicago, is publisher and CEO of ChinaInsight, a monthly newspaper with offices in Hopkins that seeks to foster business and cultural harmony between China and the U.S. (Minnesota, he said, quoting official figures, has 29,400 people of Chinese descent.)

During his visit, Hugh went to San Francisco’s famous Chinatown. “I wanted to see how they celebrated the Mid Autumn Moon Festival,” he said. “I found it crowded and commercial without any real emphasis on Chinese culture of the sort that’s presented during our Passage to China at the Mall of America.”

Bergad, on the other hand, who had coordinated the entire “Red Chamber” project from its beginnings in 2001 all the way to Saturday night, looked both happy and relieved. She said, “I have felt such overwhelming joy and gratitude to see so many people embracing this project in the Chinese community in Minnesota and here in San Francisco and also in the arts community.”

Who knows? Maybe the enterprising Minnesota Opera will put on “Dream of the Red Chamber” someday.