Peter Boehm and Nancy Peterson, who led the effort to save and renovate the historic Cafesjian’s Carousel in Como Park, are quietly stepping down after 28 years at the helm.

In 1988, Boehm and Peterson were startled to hear that the State Fair Carousel, a major attraction at the fair since 1914, was being dismantled so the hand-painted, wooden horses would be auctioned off individually to wealthy art collectors.

As carousel connoisseurs, the Falcon Heights couple strongly believed that the historic piece belonged, intact, in Minnesota. They organized a foundation and raised millions of dollars over the years to buy and renovate the carousel, which is now known as Cafesjian’s Carousel, after a St. Paul businessman who was a major donor.

Now, safely ensconced in Como Park, the carousel attracts tens of thousands of riders a year. And Boehm and Peterson, after 28 years of anguish, excitement and tens of thousands of hours of unpaid work, have decided it was time to hop off and pass the reins. In a short note on the website of the foundation, Our Fair Carousel, they announced their retirement from the board, effective Nov. 12, 28 years to the day that they formed the organization.

They weren’t planning to publicize the transition, but word leaked. I’ve covered the carousel’s many twists and turns over the years, and called Boehm to ask about the change. “It was time for someone else to step into the leadership role. And it remains to be seen who that will be,” he said. “We finally realized that a transition would not take place as long as we were there. We had become an obstacle to someone else taking charge.”

Boehm is 68; Peterson is 73. They’ve already largely retired from their day jobs. There is a board of directors still in place, and an executive director in charge of operations. “We’ve planned to retire all along, actually hoping to do it a year or two ago, after the [carousel’s] 100th anniversary,” he said. “For some time we’ve been trying to find younger board members, without a lot of success.”

I asked Boehm to think back about what made them do it, all those years ago.

Then he recalled the origin: The couple had once taken a cross-country trip looking at carousels, and later at a party talked about how wonderful the merry-go-rounds had been, and noted that State Fair carousel was the best of all.

Someone who’d been at the party heard the news of the pending sale of the carousel horses and now wanted to know: “What are Peter and Nancy going to do about this?”

Boehm remembered: “Nancy said: ‘This is terrible. Someone ought to do something.’ I said: ‘Let’s make a few phone calls and see what we can do.’”

They learned that if they could raise about $1.2 million, they could buy the carousel intact, before the individual horses went up for auction. Word spread quickly and they received hundreds of small donations. The city of St. Paul agreed to guarantee a bank loan for the rest.

Boehm and Peterson went to the New York auction house, and 10 minutes before the first auction, they sealed the deal.

They soon found a fellow carousel fan in Gerard Cafesjian, a West Publishing executive, who put up half the money in return for naming rights.

After much trouble — the former owners hadn’t taken care in dismantling the carousel, figuring that it would never operate again — they had it running again by the time of the next fair, and a record number of riders hopped on, for the carousel’s last gallop at the fair. 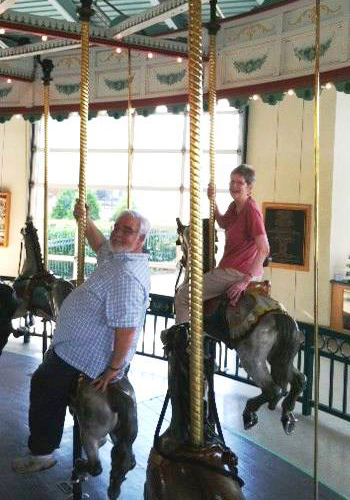 The carousel was then moved to downtown St, Paul’s old Town Square indoor city park. A massive renovation restored 68 wooden, hand-painted to their original condition. Ridership rose and fell, and eventually the park was closed and another relocation was needed.

A long, often contentious search ended with the spot in St. Paul’s Como Park, not far from the zoo and conservatory. Another fundraising effort was needed for the $1.1 million building, which opened in 2000.

Over the years, Boehm estimates, about $7 million was needed for purchase, renovation and the new Como building. But all the loans have long been paid off, and a reserve fund is in place.

Boehm and Peterson have never taken a salary, nor have they sought reimbursement for their own contributions for tools and other items over the years.

During the first 10 years at Como, ridership was about 100,000 per year; at $2 per ride, the income was enough to cover operating expenses. In recent years, though, ridership has dropped to about 75,000 per year, and costs have gone up as some of the tasks that had long been handled by volunteers are now being paid for.

“The only way to meet expenses is to bring ridership back up to 100,000,” Boehm said. And for that, “we need more promotion [at the zoo]. People don’t come from long distances for a four-minute carousel ride; they come to Como Park for so many other great things. We need to encourage them to make the carousel one of those things.”

New leadership will bring fresh ideas for doing that, he said.

And to emphasize that this was a planned transition, Boehm found an email he’d sent me 13 years ago: “We are continually reminded of our early naivete when we thought the project might take 6 months or a year of our time. With 15 years down, we have about 2 more years of real financial struggle yet to get through.

“My own personal hope for the future is to get the carousel on a solid financial footing, get all procedures documented, and create a succession plan for replacing Nancy and me (we are continually looking for volunteers and board members younger than 45!). Then after the 100th birthday celebration (2014) we plan to retire and just sit on the bench watching the carousel spin by.”

It took a bit longer. And now, Boehm and Peterson can finally get back to the porch they built on their home, time for the garden and with their grandchildren, who are also big carousel fans.

And the couple will not be strangers to the historic attraction that they saved for future generations.